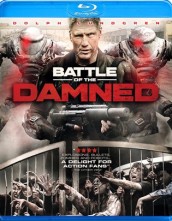 Blu-ray/DVD Review: BATTLE OF THE DAMNED

Given the proliferation of zombie entertainment at present, the genre breaks down not just into film, TV and videogames and fast zombies vs. slow zombies, but also the good, the bad and the ugly. BATTLE OF THE DAMNED turns out to be one of the good ones – no, it’s not up there with the remake of DAWN OF THE DEAD or 28 DAYS LATER, but it’s proficient, has a coherent storyline, lots of action, and throws in air strikes (often part of zombie movies) and malfunctioning robots (those are new), plus star/producer Dolph Lundgren.

Lundgren plays Max Gatling, a former Delta Force major who’s now part of a private security company, sent to an unnamed Southeast Asian country on a retrieval mission. The country has become overrun by “the afflicted,” flesh-eating victims of a virus escaped from the lab. Max and his company are there to retrieve Jude (Melanie Zanetti), the daughter of a man wealthy enough to pay for an extraction. Jude turns out to be handy with a gun, but she’s loyal to the survivors who have taken her in – her boyfriend Reese (Matt Doran), group leader Duke (David Field), warrior Elvis (Jen Keo Sung), and friends Lynn (Lydia Look) and Anna (Oda Maria). Max is only supposed to bring back Jude. With hordes of bloodthirsty crazies in the streets, a military blockade and an unwilling rescue subject, this is a challenging mission – and that’s before the malfunctioning robots arrive.

Director/writer Christopher Hatton gets down to business quickly, explaining how the infection got started in a screen crawl, having Max accept the mission and then just dropping us into the infestation zone without further build-up. As it’s pointed out several times, the afflicted aren’t actually zombies – they’re really sick/hostile humans, a la 28 DAYS LATER, as opposed to actual walking corpses. The benefit of this to our heroes is that the afflicted can be killed any which way, rather than requiring destruction of the brain; the drawback is that not only can these things run, they can also play possum (although this aspect isn’t utilized as much as it could be). These adversaries are suitably alarming-looking in their illness, even if they aren’t at undead extremes.

The robots seem to owe some debt to the ED-209 design of ROBOCOP; their inclusion in BATTLE OF THE DAMNED altogether, let alone when they show up and what they do, takes the movie from decent zombie action fare to notable gonzo attraction.

Lundgren’s presence means that BATTLE is going to be more of an ass-kicking, bullet-spraying action flick rather than something meant to be really scary. Filmmaker Hatton gets in a few art shots – there’s a very nice sequence with shadows – but he mainly showcases the martial talents of Lundgren, as well as Sung, who is also the movie’s stunt coordinator. Fans of BUFFY THE VAMPIRE SLAYER can check out that series Seasons 1-4 stunt coordinator Jeff Pruitt in a small role as Bayley (he’s also the credited stunt rigger here).

The actors all seem committed to their roles, with Zanetti and Doran exuding spunkiness and Field exhibiting appropriate world-weariness. Why Maria’s character Anna is wandering around even the supposedly safe grounds of a sanctuary in a short nightgown during an apocalypse is an unanswered question.

BATTLE OF THE DAMNED is far from a classic, but if you are in the mood to see fast zombies up against faster feet, fists and firearms, it certainly fills the bill with energy and some panache.