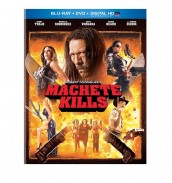 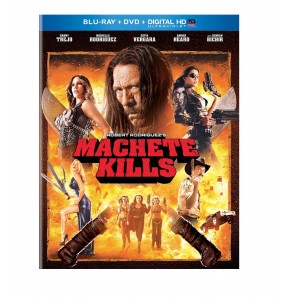 MACHETE KILLS – After the whole GRINDHOUSE double feature that came out and the subsequent sequel featuring Danny Trejo as MACHETE you pretty much have an idea about what this film is going to be before you even get there. Yes, it is an over-the-top bloody violence film filled with crazy kills and outrageous action – come on when will you ever see a speedboat take out three dudes with the propellers as it flies upside down? But going into MACHETE KILLS knowing this, if you leave your brain at the door, it is fun and time goes by pretty quickly while watching. The plot isn’t anything substantial: Machete gets hired by the president (played by Charlie Sheen) to take out a radical in Mexico that has a nuclear missile aimed at Washington. But when he gets there things don’t go exactly as planned as he must fight his way back into the U.S.

Things get even further complicated when he meets up with a crazy arms dealer (played by Mel Gibson) that is really behind the attack and has premonitions of the future. So he’s forced to fight a clone army and launch into space to stop the madness. Of course, that’s where this ends and you got a bit of foreshadowing to this at the very beginning for the fake trailer for MACHETE KILLS AGAIN … IN SPACE. So look for a third installment coming at some point (maybe). Also it is a good idea to see this in Blu-ray as there are enough crazy deaths and action that it really warrants the high definition treatment. Again, just leave your brain at the door. 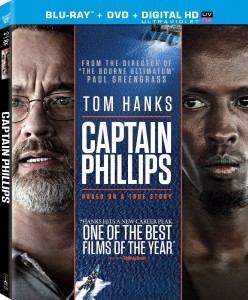 CAPTAIN PHILLIPS – There is a reason that CAPTAIN PHILLIPS has been nominated for a handful of Oscars, it is a damn good movie. But when Tom Hanks is involved it usually is. Hanks stars as a shipping freighter captain that gets attacked by pirates on the open seas. It is an interesting look at not only how ships handle such situations but we also get a view of how the pirates act, how they go about attacking a ship and why they are doing it. The crewmembers race to get into position, most of which involve hiding, while the captain confronts the pirates stalling for time in the hope that a rescue will come. And it does come as the U.S. military responds to the aid of the shipping vessel leading to some pretty good action scenes. The thing with CAPTAIN PHILLIPS is that not only is there good action here but also good tense drama as you see these pirates wanting to take the goods for their own necessities but obviously endangering the people who work on the ship at the same time. So while you don’t really feel good about the pirates, at least you understand where they are coming from. Lots of cool scenes from the ship so seeing it in high def is recommended. 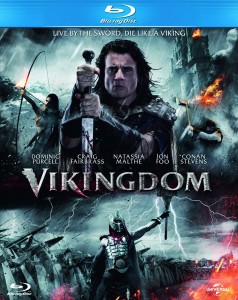 VIKINGDOM – Apparently the old Gods are pissed. They don’t like it that some upstart named Jesus is taking all their followers. So Thor (who for some hysterical reason has the worst red hair dye job in maybe film history) is sent to Earth in order to destroy the vast empire of humanity and bring the old Gods to Earth in order to take out their revenge. This doesn’t sit well with a demi-God (played by PRISON BREAK’s Dominic Purcell) who doesn’t like the fact his people are going to get demolished. So he puts together a rag tag group of Vikings in order to stop the bad guys. There is a lot of bloody violence here with a lot of no-names dying on the field of battle. While there are some decent action scenes the whole plotline is pretty straight-forward and not that exciting and really it could be any type of people defending the Earth, I think it just made sense for it to be Vikings because they are hot right now and it was a way to get some fancy special effects involved – which end up being not very fancy because this was obviously made on the cheap. Still, for a straight-to-video, it could be worse and there are much worse action flicks out there. So if you enjoy Vikings and action, might be worth seeing on Netflix. 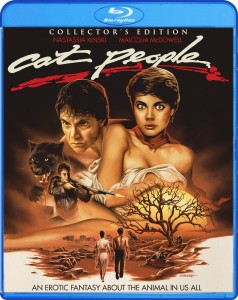 CAT PEOPLE – The classic erotic horror flick that launched Nastassia Kinksi into the spotlight of Hollywood returns to video for the first time in a long time and this time in high definition. Scream Factory, the horror branch of Shout! Factory, continues to roll out these great classic horror films in high definition and it is a great thing to see. This is probably the best this film may have ever looked considering if came out so long ago and never had any of the technological marvels of today to enhance the product. Basically, a bunch of panther-people have been living in our world for centuries with their blood line being passed down through the ages sometime without some people even knowing about it. So the wonderfully gorgeous Kinksi gets fully naked quite a bit while the curator at a local zoo tries to figure out why a panther is killing people. He falls in love with Kinksi’s character who also happens to have a tendency to turn into a panther but that doesn’t seem to bother him much as he just ties her up to have sex with her. It’s an oddball movie that isn’t at all scary but features weird imagery and a crapload of naked chicks running around – never a bad thing. If you liked the film before, you will love now in high def. 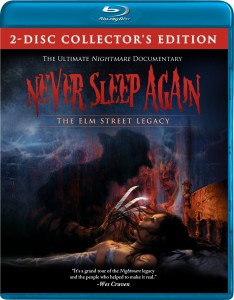 NEVER SLEEP AGAIN – This cool little documentary on the whole history and impact of the NIGHTMARE ON ELM STREET franchise is being offered again for the first time on Blu-ray. The documentary is really just a look at the behind-the-scenes development of the franchise and how much Freddy Krueger has meant to pop culture and the impact of his character and films have been on the American public. It is really a fascinating look because the original horror flick was such a small film on a small budget and it grew to become such a large franchise with everyone making money hand over fist. The film boasts that more than 100 people were interviewed and it seems accurate considering how many people are indeed put in front of the camera. But also contained here is a slew of cool facts and trivia about the making of the films that maybe fans won’t have known. Obviously this is a must have if you are a fan of any of the NIGHTMARE films or a fan of Krueger in general. Definitely worth checking out if you love behind-the-scenes stuff.