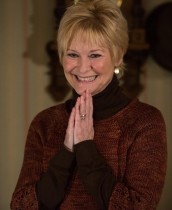 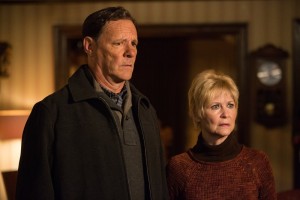 Even big bad Blutbads have mothers – at least, they do on GRIMM. In tonight’s episode, NBC, Friday at 9 PM, we meet the parents of the wolflike Monroe (Silas Weir Mitchell) when he decides to ask an important question of his beloved Rosalee (Bree Turner), who is a foxlike Fuchsbau. In other words,Monroe is planning to marry outside of his Wesen species, which may cause his parents to growl a little bit.

Monroe’s mother is played by Dee Wallace, who previously played a werewolf in THE HOWLING, was the mom in E.T. and has many other roles to her credit, as well as being an acclaimed author, acting coach and healer.

We caught up with Wallace via email to ask her about playingMonroe’s mom.

AX: Did you do any research into wolves to play a Blutbad?

DEE WALLACE: No. I know about wolves. I did do a movie called THE HOWLING, ya know!  And I have had dogs that are part wolf.

AX: Who is playing your husband? How was it working with him?

WALLACE: Chris Mulkey plays my husband. I can’t believe we have never worked together before. It was a dream, like we had played these parts together for years.  The entire cast is amazing and giving and incredibly talented.

AX: Is your character eccentric?

WALLACE: I would say my character is “fleshed out” very nicely: lots of emotional twists, vulnerability and strength all at the same time.

AX: Do you get to channel your inner HOWLING for this, since Monroe and his family are essentially werewolves?

WALLACE: Oh sure! It’s always nice to have the license to go as far as you can go and still be true to the part. You bet I howled a few times!

AX: What are your sentiments toward your son’s Fuchsbau girlfriend Rosalee, played by Bree Turner?

WALLACE: I sooo love Bree! This girl has just got it. Sweet and present and subtle. Absolutely loved working with her. As the fiance and mom … well, we walk through a few challenges!

AX: Do you have to do anything special for when your character morphs and reveals her Blutbad face?

WALLACE: It’s all CGI. But you have to go through the process for them to match you visually, and be willing to feel really stupid while you are acting like a Wesen but looking like a perky blonde!

AX: Have you seen what you look like when your character is in her Blutbad phase?

WALLACE: I haven’t!  Can’t wait to see the take on that! I bet it won’t be the Bambi werewolf like THE HOWLING!

AX: How do you enjoy working with Silas Weir Mitchell, who plays your son?

WALLACE: Silas is intense and powerful and the utmost professional. He was so very kind to sign a picture for a healing client of mine who was struggling with some issues. Always there for the actors. A joy.

AX: How did you enjoy working in Portland, Oregon?

WALLACE: I love Portland. I did a picture there before called SHADOWPLAY with Cloris Leachman. The first Saturday I went to the Saturday Market and spent half my money on gifts for Christmas! Love the food. And, of course, the bars are fun!

AX: You’ve worked with GRIMM co-creators/show runners David Greenwalt and Jim Kouf before. Is that how the casting happened? Was this part written for you?

WALLACE: No, I am not aware [of whether] the part was written for me, but I am thrilled to be working with the producers again. We had a blast on [the 1985 feature film] SECRET ADMIRER. I am happy for my fans, too, who keep asking why the hell I am not doing some of these horror shows on T.T. I have to say, the producers have created an amazingly fun and professional set, which is the way they all should be!

AX: Will you be recurring and do they have major plans for your character?

WALLACE: I have shot two [episodes]. There is talk of maybe another. Other than that, I am the last to know! It’s up to the fans, the network, and the producers.

WALLACE: Oh yes! Negotiating right now for a lovely Christmas movie. I will be seen soon in ZOMBIE KILLERS: ELEPHANT’S GRAVEYARD, along with my beautiful daughter Gabrielle Stone (no … they hired her first!  lol). Several pics I have completed are due to be released.

AX: This is at least your second project based on Grimms’ fairytales. Is it harder to be a wolf or a witch?

WALLACE: Hehe. I guess you are referring to HANSEL & GRETEL, another great ride! I loved them both, because I got to explore my vulnerable side and go into my wild, manic side too. Love to play those arcs!