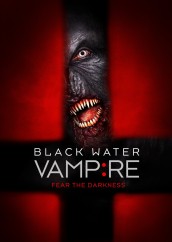 The first two-thirds of BLACK WATER VAMPIRE are a near re-creation of THE BLAIR WITCH PROJECT, except with a vampire, snow and better camera equipment.

Yep, it is another found footage horror flick where a group of four young documentarians investigate four murders of women on the same day over the course of four decades in the Black Water Forest in Washington State. Of course, none of these doomed documentaries ever ends well.

As the Black Water killings go, four women in four separate decades were found in the forest, beaten to death, half-naked, with a large bite on their necks and drained of blood. The police arrested and convicted a town crazy believing him to be the killer. Yet questions remain about the tactics used to get his conviction and the weird circumstances surrounding the killings.

For the most part, the first-two thirds of BLACK WATER VAMPIRE are done decently with a number of interviews showing a very strange town with very strange people all of which believe this was the work of just a nutjob that got his jollies every 10 years or to appease the devil. But the documentary crew thinks something else is going on so they plunge in the snow-covered forest for answers.

Bad idea. From the get-go they are tormented by strange noises, something screwing with their tent, odd symbols on trees and a host of other weird stuff until they discover the answers they seek. Which obviously is not exactly what they hoped for.

The whole problem with BLACK WATER VAMPIRE resides in the title. By giving away the big reveal in the title, any suspense or shocks you may have gotten when something rustles a tent or screams in the night or slowly creeps toward the camera crew is completely wasted because you already know it’s a freaking vampire. So when the cast says stuff like “It’s just kids messing with us.” Or “Maybe it’s an animal.” You sit there, look at the DVD box and say, “No stupid, it’s a f***ing vampire.”

Had they called this “The Black Water Killings,” which is what the entire fake documentary is based on, it would have at least given us a tiny “oh sh**” moment when the vampire is revealed, no matter how lame the special effects are. And that’s one other problem with this straight-to-video, the vampire is right out of FROM DUSK TILL DAWN complete with wings, horns and all that other crazy batsh** stuff that makes vampires completely comical and not at all scary.

We also get way too much vampire on camera for a proper found footage film such as this. The thing that worked about BLAIR WITCH was that they never really showed the witch or fragments at best. So you had to piece it together from memory or see it again. That’s much scarier than seeing a silly winged creature straight attack a group of twentysomethings in the middle of the night for the final third of the film.

I know this sounds like I totally hated the film but actually I liked it until the reveal of the vampire. It was well paced, there were moments where it could have been spooky or disturbing (if we didn’t already know the answer) and in general a good homage to BLAIR WITCH (even to give the cast their “real” names). And that’s why I wished it could have been better … because the last act sucks monkey nuts. Once it starts to go downhill, it goes downhill epically. Almost if it was rushed because they ran out of budget (or ideas).

Not to ruin the ending of what happens. Let’s just say, the strange people in the strange town are exactly strangers to what’s going on, yet nothing is explained as to why. Or anything about the convicted killer or a whole multitude of plot points that are absurdly and shamefully ignored – considering two-thirds of the film are dedicated to it.