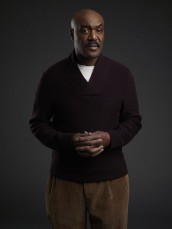 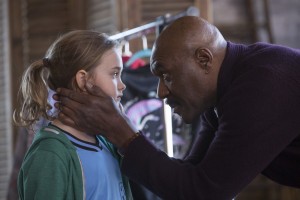 In NBC’s BELIEVE, Sundays at 9 PM, we meet Bo, a young girl with special powers. Created by Oscar-winning director Alfonso Cuaron and Mark Friedman and executive-produced by Cuaron, J.J. Abrams and show runner Jonas Pate, BELIEVE chronicles what happens after Bo is forcibly removed from her most recent set of Foster parents. Tate (Jake McLaughlin) is sprung from prison to protect Bo, even though he’s never met the child. The man overseeing Bo’s rescue, Tate’s release and bringing the two together is Milton Winter, played by Delroy Lindo.

Lindo, a prolific actor who was born in London, England, has an extensive feature film career. He recently starred in the under-watched but powerful Fox series THE CHICAGO CODE as corrupt Alderman Ronin Gibbons.

At a Q&A panel held by NBC for the Television Critics Association and in a private conversation afterward, Lindo talks about his new gig on BELIEVE.

ASSIGNMEnT X: After CHICAGO CODE ended, were you looking to play somebody who was a little more altruistic than Alderman Gibbons?

AX: What did you see as the initial merits of BELIEVE?

LINDO: I had a wonderful conversation with Alfonso. They called me up, and the things that Alfonso said creatively were very exciting to me. So from my standpoint, it was not necessarily a no-brainer, but the prospect of working with him on this project was certainly very exciting.

I want to add in terms of the template established [in the pilot] by Alfonso, one of the elements in that template had to do with a certain kind of creative openness. And I don’t mean creative openness from the standpoint of doing what you want, I mean creative openness from the standpoint of applying oneself to the idea of the show, the narrative of the show. And there’s a certain kind of openness that has continued, from my standpoint as an actor working on it, [with] each of the directors and the producers that have been involved, there exists this openness to ideas and openness to modify things in a way that help tell the overall narrative. And that has been very, very affirming creatively.

AX: What do you like about playing Milton Winter?

LINDO: One of the aspects that has revealed itself just recently is that I’m a clinical psychologist. I like that. Not in terms of the label, but in terms of the potential for where that might lead. I really like the fact that I am so committed to protecting this little girl and everything that that represents. So they’re just two things that really, really interest me about playing this character.

AX: Does the fact that the character is a clinical psychologist allow you to watch the people around you in a different way?

AX: We learn in the pilot that Winter is withholding some information from Bo and Tate. What do you think that does for Winter and for the story?

LINDO: There’s the script that I have received, and then there’s the way I have tried to embody that from a creative standpoint, from an acting standpoint, and [Tate] feels like a powder keg. Also, there’s a huge set of responsibilities that come with [Tate learning the information]. So to manage all of that, I’m not [as Winter] just going to blurt that out. I want to manage him and manage the situation in a certain way to try to ensure that [Tate] is up for the responsibility.

AX: Have you had to learn anything new in order to play Winter?

LINDO: Yes. I spoke with a gentleman who is into hypnotism, and that was a really interesting conversation just in terms of how he accesses people’s minds, and that is something that may be of use to me in the work going forward.

AX: And how much CGI and standing around and waiting with the CGI is there?

LINDO: There’s been no CGI. A lot of the things have been put in in post-production, so we haven’t had a lot of standing around.

LINDO: CYMBELINE. I filmed Shakespeare’s CYMBELINE in September [2013]. I talked to the director [Michael Almereyda] and they were doing a music mix. I’m not sure when it will be released, but that is the next feature film that I will be seen in.

AX: Have you done a lot of Shakespeare on stage?

LINDO: I’ve done a bit. I’m classically trained and I’ve done quite a bit, five or six productions over the years.

AX: Any big differences in doing it for the screen?

LINDO: You can be much more intimate. We can speak just as we’re speaking now [during this interview], which is fantastic creatively, very, very freeing.

AX: If you had superpowers, as some of the characters do in BELIEVE, what would you want to do with them?