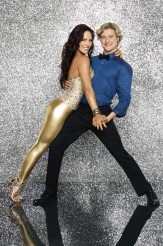 DWTS kicks off the season with some things old, some new and some returning, yes Maks! 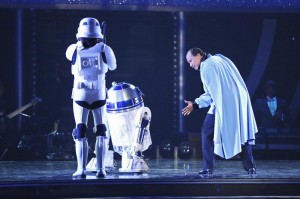 It’s that time of year. It only happens twice a year, once in the fall and now in the spring time. DANCING WITH THE STARS: Season 18 has begun. Learning from some failed change ups last fall, the DWTS producers decided to bring back some old elements, while bringing on some new faces, co-host Brooke Burke-Charvet and the entire band was let go after season 17. Former contestant Erin Andrews now co-hosts with Tom Bergeron – this is the fourth different co-host Bergeron has worked with on the show – and the judges panel is back to stage left, where it belongs. Still, no results show, which is still sorely missed. Yet, the excitement is there and the competition has started with a bang. Olympian skater Charlie White, along with Sharna Burgess, has taken the top score of the night with a very impressive 27.  STAR WARS alumni Billy Dee Williams and partner Emma Slater are at the bottom with 15.

NeNe Leakes (reality TV star) and her partner Tony Dovolani
A whole lotta attitude. Inaba said she was larger than life in her Cha Cha Cha. Tonioli said she had so much to give. Goodman thought she was like an all you can eat buffet.
Scores: Inaba – 7, Goodman – 7, Tonioli – 7, Harland – 7

Charlie White (Olympian) and his partner Sharna Burgess
Sooo cool! Inaba called his Contemporary poetry in motion. Goodman said this was a good dance for him. Tonioli said it was astonishing.
Scores: Inaba – 9, Goodman – 9, Tonioli – 9, Harland – 9

Diana Nyad (athlete) and his partner Henry Byalikov
A lot of stamina. Goodman said she needed more finesse in her Foxtrot. Inaba compared her to a slowly opening flower.  Tonioli said she needs to find her footing.
Scores: Inaba – 6, Goodman – 6, Tonioli –  6, Harland – 6

Sean Avery (hockey player) and his partner Karina Smirnoff
He is full of passion. Inaba said she was fascinated by his Contemporary. Goodman said it was full of intensity. Tonioli said it was powerful.
Scores: Inaba – 7, Goodman – 6, Tonioli – 7, Harland – 7

Drew Carey (actor/TV host) and his partner Cheryl Burke
He has the potential to get better. Goodman said his Foxtrot was very watchable. Inaba said he was a crowd pleaser. Tonioli said it could be slightly better.
Scores: Inaba – 7, Goodman – 7, Tonioli – 7, Harland – 7

Amy Purdy (Olympian) and her partner Derek Hough
She can shake it! Inaba called her a beacon of light. Goodman said she gets a gold medal in the Cha Cha Cha. Tonioli said he was gobsmacked.
Scores: Inaba – 8, Goodman – 8, Tonioli – 8, Harland – 8

Danica McKellar (actress) and her partner Valentin Chmerkovskiy
She is having fun! Goodman said she was terrific in her Foxtrot. Inaba called her adorable. Tonioli said she was saucy.
Scores: Inaba – 8, Goodman – 8, Tonioli – 8, Harland – 8

James Maslow (singer/actor) and his partner Peta Murgatroyd
Nice start. He looked comfortable on the floor. Inaba said he had a natural elegance. Goodman said he gave the Foxtrot a go. Tonioli thought he attacked it.
Scores: Inaba – 7, Goodman – 7, Tonioli – 7, Harland – 7

Who’s going home: Billy Dee – Bon Voyage!…or Diana, take a lap!
Who Has Legs To Take Home The Mirror Ball: It’s the Olympians (Meryl and Charlie) vs. the TV stars (Danica and Candace)