100 Episodes - a Milestone for this CW Vampire Show! 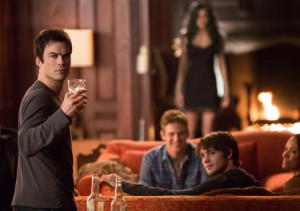 Ian Somerhalder as Damon, Zach Roerig as Matt, Nina Dobrev as Katherine, Steven R. McQueen as Jeremy and Kat Graham as Bonnie in THE VAMPIRE DIARIES - Season 5 - "500 Years of Solitude" | ©2014 The CW/Bob Mahoney

“500 Years of Solitude” is THE VAMPIRE DIARIES 100th episode…so congrats CW and the stars of the show.

At the end of the “Fifty Shades of Grayson” (Episode 10, which aired December 12, 2013), before the show took a winter break it ended with Katherine Pierce (Nina Dobrev) clutching her chest and falling down the stairs. Since she is mortal now and growing older everyday, you had to take it that she had a heart attack.

“500 Years of Solitude” starts with Katherine in the hospital being shocked to restart her heart, and back flashes to Katarina Petrova (Nina Dobrev) going into labor. Katarina has a little girl, but her mother takes the baby and won’t even let her hold it before her father takes the baby away. She is screaming, crying and pleading with her mom to let her see the baby.

Back to the hospital, Stefan (Paul Wesley) tells Nadia (Olga Fonda), Katrina’s daughter that the doctors were able to start her heart, but she is dying and isn’t expected to last the day. What does Stefan do – he compels the doctors to let him take her home. Possibly deep in his heart Stefan loves her.

Back at the house, Katherine is upstairs with Stefan by her side. She is worrying that she looks all wrinkled and tells him if she starts to sag, anywhere, he should kill her by jabbing a knife into her carotid artery. Stefan assures her that she is not wrinkling. She knows that they are talking about her downstairs. After all she has done to everyone over the years she has to realize that maybe they do not care that she is dying.  Damon (Ian Somerhalder) pours a drink for everyone. Elena (Nina Dobrev) takes a shot and states, “If anybody is drinking to Katherine’s last days, it’s me. She impersonated me, repeatedly. She made Aunt Jenna (Sara Canning) stab herself in the stomach and she cut off Uncle John’s (David Anders) fingers.” Bonnie (Kat Graham) tells them her Gram (Jasmine Guy) died trying to close the tomb that Katherine was not even in. Tyler’s (Michael Trevino) werewolf curse was triggered because of her. Caroline (Candice Accola) states “and she killed me.” And because of her Alaric (Matthew Davis) died. Katherine was a force to reckon with so really how much more damage can she do…but knowing the writers they will find someway to keep Katherine around causing more trouble.

Stefan comes downstairs and tells everyone that they are being insensitive. Damon reminds him not to let the fact that she’s an Elena lookalike and that she is also a manipulative psycho cloud his thoughts. Stefan then tells everyone that she seduced both him and Damon, turning them into vampires and starting a war with the town that got them killed. He then reminds Damon that before that she was just a frightened girl shunned by her family, and she became a survivor and to that he will drink to. I like the fact that Stefan is always made the good guy and Damon the bad guy. This was actually a very good episode and answers a lot of more questions about Katherine. One thing though as I think about it, who was the father of Nadia…someone in the village…she wasn’t a vampire yet.

Matt (Zach Roerig) goes to the cellar to get some more booze and runs into Nadia, who knocks him out cold. She has a plan to save her mother. Burying Matt in the safe somewhere on the property, without his ring, she realizes that this is a way to get Elena and Stefan to volunteer to help. Damon is adamant and forbids anyone to help Nadia. She has looked for her mother for so long, she is not going to lose her now! Nadia is just as malevolent as her mother!

Taking Elena and Stefan to a boarded up house she explains that she plans to transfer Katherine to herself. The house has been vampire proofed so they couldn’t do anything. Other Travelers show up chanting and Mia (Taylor Treadwell) whom Nadia made the deal with which was for the doppelgangers…they want their blood, although they never let you know why. Rendering their daylight rings useless so it wouldn’t protect them and they could do nothing as the walls start falling down and the sun is shining in burning them.

Back at the house, Caroline, Bonnie and Jeremy (Steven R. McQueen) are searching for Matt in the woods. They decide to split up since Caroline keeps talking about the fact that Bonnie and Jeremy has sex and Bonnie didn’t tell her. Is she the only one that has not had scandalous sex? While Caroline is walking through the woods yelling Matt’s name, who shows up but Klaus (Joseph Morgan), he really has a thing for Caroline. She tries to ignore him telling him she has to find Matt. Klaus tells her that is taken care off, but doesn’t tell her who is taking care of it. He knows Katherine is dying as Damon told him and since he has been hunting her for 500 years he doesn’t care. He tells her he will go away and never bother her again if she would offer her the same choice that she offered Tyler. As Caroline walks closer to Klaus you know what is going to happen…they kiss…and of course the scene changes to the safe being opened and as Matt climbs out there is Rebekah (Claire Holt) who smiles at Matt, “I’ve been gone three months and look at the trouble you’ve gotten in.” Rebekah has a soft spot for Matt. You can just imagine what happened between Klaus and Caroline as when she comes back to the house she pulls leaves out of her hair.

Meanwhile, Katherine going in and out of flashbacks remembers coming home in Bulgaria in 1492 to see her family had been slaughtered. Then she sees Damon walk into the Bulgarian cottage to rub in the fact that Klaus only killed her family because he was going to sacrifice her and she ran and now she realizes that her family’s death was her fault. Not knowing that Damon has come into the bedroom and just as he was about to put her out of her misery by smothering her, Sheriff Liz Forbes (Marguerite MacIntyre) walks into the room and stops him. Damon tells her “every awful thing I’ve done is linked to her. She taught me how to kill, how to enjoy it. She ruined me and I can’t take any of that back.” Sheriff Forbes tells Damon “Look at how much control she still has over you, Damon. Prove her wrong.” Why was Sheriff Forbes there…to bring some sedatives for Katherine, but she doesn’t want them because they make her weak and they will let Damon get in her head.

Katherine tells Damon how Stefan and her met as he really never knew and is surprised at hearing the story. It was 1864, Mystic Falls, Katherine is on the road in her carriage with Emily (Bianca Lawson) heading to the Lockwood Plantation and she sees Stefan on the side of the road with his carriage that has broken down. She thinks he is the most handsome man she has ever seen and tells Emily, “I wonder if they will take in an orphan girl?” Was this the fate of doppelgangers to be together? While Damon is listening to the story Nadia comes up behind him and breaks his neck.

Katherine tells Nadia that she is ready to take her in her body. Katherine tells Nadia “Letting my father take you from me was the biggest regret of her life and she vowed never to give up so easily again. She has spend 500 years fighting for everything and lived a full life and now it was Nadia’s turn to live.” Damon who has awaken is listening to Katherine tell Nadia that she’s been selfish her whole life and just wants to do the right thing for once. Nadia is upset and refuses to watch her mother die and walks out. Something is in the works, as deep inside Katherine wants to live.

Stefan returns to say goodbye to Katherine. She closes her eyes and is back in the cottage. Stefan is there with her, he tells her to open her mind to him and makes the images of her dead family disappear. He continues telling her, “you were a 17 year old girl and none of it was your fault. You deserve to feel at peace.” Katherine hears a baby cry and turns and sees Nadia as a baby in a crib and that is the last image she sees. Elaine comes into the room and Stefan tells her “Katherine isn’t quite gone yet, but won’t wake again.” So he thinks, you can’t trust her something is up I’m thinking as I’m watching this. Where are the writers going with this you have to wonder?

Downstairs Matt asks Bonnie about being the anchor. He wants to know if she sees people. She said yes, her Grams, but Matt wants to know if he sees Vicki (Kayla Ewell) and at that point she appears and Vicki tells Matt through Bonnie, “she watches over him and he should stop hanging around Rebekah.” A surprise visit the front door opens and Tyler walks in, “Rebekah said to tell you I’m her parting gift.” Caroline can’t say anything as you can tell she feels guilty over what just happened with Klaus, but Matt gets up and hugs Tyler. They are all gathered in front of the fireplace and Steven hears Alaric. “Where the hell have you been? I thought you bailed on us to find peace or something,” Jeremy says. Alaric goes, “Do you honestly think I’d leave Damon in charge and never look back?” Jeremy tells Damon, “He says you’re a dick.” Suddenly Bonnie sees Katherine’s spirit, but only for a second.

Katherine is still not dead, she has awakened and Elena is sitting next to her. Katherine tells Elena she has unfinished business. Elena has a whole speech ready to say to her, but just tells her “I forgive you. You weren’t born evil, life made you that way.”

Katherine then asks Elena to give her the last sedative…”If anyone’s going to plunge a needle in me one last time, it might as well be you.” As Elena takes the needle Katherine thanks her for her forgiveness and as she plunges it in her arm Katherine grabs Elena and recites the Traveler’s incantation. Katherine is now in Elena. The phone rings and it’s Mia the Traveler calling to activate Katherine. Mia hands the phone to Nadia who asks her “Did it work?” Of course it did, Nadia knew all along what the plan was. Walking to the mirror after checking that Katherine had no pulse she looks at herself and goes “Hi, I’m Elena Gilbert!”

It is going to be interesting how long this arc will last until everyone realizes that Katherine is in Elena. Katherine is so much more devious then Elena, so it should be a lot of fun!

Related: TV Review: THE VAMPIRE DIARIES – Season 5 – “From Whom the Bell Tolls”