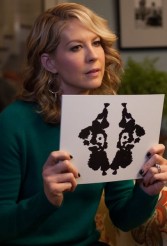 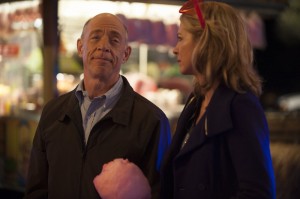 It’s a busy time for Jason Bateman. GROWING UP FISHER, the half-hour NBC comedy he executive produces and narrates, is in its third week on Tuesdays at 9:30 PM, and his feature directorial debut, BAD WORDS, which Bateman also stars in and produces, opens this Friday, March 14.

In GROWING UP FISHER, young Henry (Eli Baker) is dealing with the friendly divorce of his parents, Mel (J.K. Simmons) and Joyce (Jenna Elfman). Bateman voices the older Henry, looking back at a time in his life complicated not so much by the parental split as by his father’s blindness, which is a much greater issue now that Mel is stepping out on his own. The series is based on the real-life experiences of its creator, D.J. Nash.

Bateman is at NBC’s event for the Television Critics Association press tour to discuss GROWING UP FISHER. Inevitably, other projects, like BAD WORDS, Netflix’s recent revival of ARRESTED DEVELOPMENT, with Bateman in its ensemble cast (the series originally ran on Fox 2003-2006) and his career as a child actor (credits include LITTLE HOUSE ON THE PRAIRIE and SILVER SPOONS) are part of the conversation as well, both during a Q&A session and a smaller follow-up discussion.

AX: So GROWING UP FISHER is based on fact, rather than trying to put a new spin on the half-hour family comedy? What appealed to you about the project?

JASON BATEMAN: You would take it from the jar of, how do we make a great relatable family show and try to give it somewhat of a new twist? Thank God, it wasn’t just an arbitrary grab like that. It’s his [Nash’s] true story, so cynicism be gone. As far as being attracted to the show, [fellow executive producer] Jim [Garavente] and I have a company, we are looking to be involved in television, and it is a medium that I love, that I grew up on and with right here at NBC. And I just love it. And I want to be in business with the people who are writing and creating the best television that’s going on right now, and D.J. was one of the people we were lucky enough to sit and talk to and kick around ideas with. He talked to us about this obviously very personal show, concept, premise. My sensibility is not super-soft, for lack of a better term, and talking with D.J. about the way in which he wanted to address these issues that perhaps on paper might read as soft led me to believe that there is a light sensibility and a light sense of humor that can address some of the issues that are pleasantly heartwarming, but done in a way that is current, modern, sophisticated and palatable to the more cynical people in the audience like myself.

AX: Does having been a child actor yourself give you any insight into what the younger people in GROWING UP FISHER – Eli Baker, Ava Deluca Verley – might need or want from you as a producer during production?

BATEMAN: No. Neither one of them needs anything. There’s a joke in there somewhere, but I don’t have it yet. I mean, I have a very clear memory of how I liked to be treated when I was a kid actor, or just a kid. You always want to be treated like an adult, and in fact, these guys are dealing with very real adult responsibilities, pressures, obligations. I mean, they are both sitting up here, staring at [a lot of reporters]. That’s not really something kids their age have to do, and they haven’t passed out from nerves yet. It’s an adult job, and they are certainly qualified and worthy of it. They don’t need much from me, but I welcome [giving] them any tidbits they might need or teach them how to get the prop master to make them a fake i.d. That’s always important.

AX: Not necessarily directed at your GROWING UP FISHER costars, but do you have any advice for actors who are the age now that you were when you started acting – how to negotiate and survive show business?

BATEMAN: It’s tough. I guess my biggest advice is to manage your expectations and know that, unfortunately, it’s not a meritocracy, so if one is expecting employment based on your abilities as an actor, you might want to temper that, because there are many, many more intangible aspects to getting a job, or uncontrollable aspects of getting a job, than exist in other fields. So if you’re willing to play under those rules, then have at it, but I wouldn’t recommend it for those who are highly ambitious, who have a very strong work ethic and want to be able to have full control over their ability to stay employed. In any other profession, you go to a university, you get a degree and you’re probably guaranteed a job. Well, you can’t really get a degree in a lot of the things in this business, and so a lot of it’s predicated on things that are out of your control. So sometimes it’s a little unfair and a little frustrating, and you have to be ready for that.

AX: For a few years, you weren’t in any films or television. Were you taking time off?

BATEMAN: Yeah. I was going to say I wasn’t working any less hard – that wasn’t true. I was spending a lot of time catching up with my play time, because I worked so much starting so young, and after I kind of got that out of my system during my twenties, wanted to get back at it, and kind of got the root reality that a place wasn’t being held for me and you kind of have to start over a bit, and thank God ARRESTED DEVELOPMENT came along.

AX: Netflix did one season of the revival so far. What’s going on with that right now?

BATEMAN: I have no idea. I was with [ARRESTED DEVELOPMENT creator] Mitch Hurwitz and it didn’t come up, so we’ll see. He would answer that.

AX: Ron Howard narrated ARRESTED DEVELOPMENT. Did you ask him for any tips on being a narrator?

BATEMAN: Oh, no, but I should. My duty in [GROWING UP FISHER] is not too dissimilar from his in ARRESTED DEVELOPMENT in his executive producing and his narrating. It’s kind of interesting.

AX: Are you still keen on ARRESTED DEVELOPMENT?

BATEMAN: I would do anything for those people.

AX: How was your experience directing and starring in BAD WORDS?

BATEMAN: It really came together well. That’s the most fun I’ve ever had.