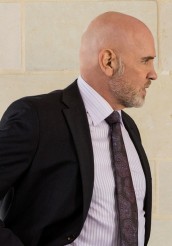 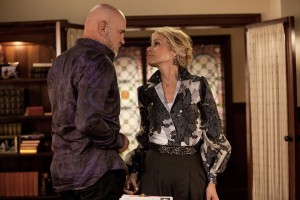 Actor Mitch Pileggi has been in his share of TV classics. He spent nine seasons, and appeared in the two big-screen spin-offs, as FBI Assistant Director Walter Skinner in THE X-FILES. He’s also had recurring roles on SUPERNATURAL, STARGATE: ATLANTIS and SONS OF ANARCHY, to name but a few of his TV gigs.

Now Pileggi is a regular as the antagonistic Harris Ryland on TNT’s resurrection of DALLAS, Mondays at 9 PM. The show, now in its third season, is essentially a continuation of the series that ran on CBS from 1978 through 1991. Original stars Patrick Duffy as Bobby Ewing and Linda Gray as Sue Ellen Ewing are back, as was the late Larry Hagman as the infamous J.R. Ewing.

At a party thrown by Turner Networks for the Television Critics Association, Pileggi talks about getting down and dirty in the land of nighttime soap.

MITCH PILEGGI: Thirty years ago, I went to school at the University of Texas in Austin. I left and I came back and I started doing theatre in Austin. I used to drive up to Dallas and work as an extra on DALLAS, the first incarnation of the show, thirty years ago, so I’ve come full circle. And I know what DALLAS is about, because when I went to Los Angeles, I did a four-episode arc with Larry on DALLAS. It’s when Leonard Katzman was still running the show [which was created by David Jacobs]. It’s very cool. I’m working with Patrick and Linda and for a short period there with Larry. It’s been wonderful.

AX: Is your character the same one you were playing back in the original DALLAS?

PILEGGI: No. I was playing another character [named Morrissey], another bad man, back then. This is a different character.

AX: Did Larry Hagman remember you from the original DALLAS?

PILEGGI: I don’t think he did. At first, he may have. We only really came in contact with each other a couple of times, because I didn’t really have any scenes with him. But one time I talked to him and I don’t know if he remembered me. It was thirty years ago.

I don’t know if he remembered me in either respect, but that’s okay. I got to talk with him, I got to hang out with him.

AX: Did anything change unexpectedly on the show as a result of Larry Hagman’s death?

PILEGGI: Obviously, yes. I know that, because I asked them, at the time Larry passed away, I said, “I’m sad that he’s gone, but I also feel bad that I’m not going to have the opportunity to cross swords with him.” They said, “We had huge plans for your character to really go to war with J.R.”

AX: Who are you duking it out with now?

PILEGGI: Pretty much Bobby and my ex-wife Ann [played by Brenda Strong], so those are the two. Plus I’ve got my hands full with my daughter Emma [played by Emma Bell], so he’s got a lot of irons in the fire.

AX: Does Harris Ryland experience guilt over his badness, or does he think he’s doing the right thing?

PILEGGI: I like the episode where he was talking about the Komodo dragon. I got a couple good scenes in there. One is with the Governor, where he’s talking about all this stuff that’s going on, and then there was another scene with my daughter, where I had her boyfriend beaten to a pulp and I tell her, “This is what happens if you don’t listen to me.” So I was really happy with that episode. I’ve been happy with all of them, really, but I was happy with that one.

AX: You’ve done a lot of work in the science-fiction genre. Do you miss at all being able to completely imagine what your enemy looks like, or do you like it embodied in a fellow actor?

PILEGGI: I like it both ways. Acting for me is a treat – it’s not work, it’s playtime, so I feel very fortunate that I get to do this. So whether it’s sci-fi, whether it’s fantasy, whatever it is, I’m pretty happy to be doing it.

PILEGGI: I was recurring on SONS OF ANARCHY for the first three seasons, and then I had to go away because I was doing other stuff, and they called me up and asked me to come back and do another episode, so I did get to do another episode [in 2013].  I got to work with Robert Patrick on it, which was great. So you’ve got Doggett and Skinner [from X-FILES] on SONS OF ANARCHY [laughs].

AX: Any word on another X-FILES film project?

PILEGGI: I have no idea. I didn’t know I was in the last movie until halfway through shooting it.

AX: You’ve also done a lot of stage in your career. Do you miss theatre at all?

PILEGGI: I do, I miss theatre terribly. As a matter of fact, working with Judith Light [who plays Judith Ryland on DALLAS], she had mentioned at one point that I should come up and do Broadway. I said, “I would love to do Broadway – I don’t know anybody up there.” She said, “You know me.” So that’s a pretty good in. At some point, I would really like to get back on stage. So we’ll see what happens.