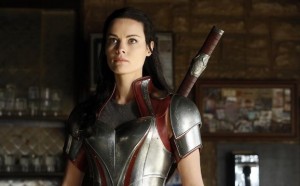 Well it took seeing some crazy half alien being used as a miracle cure drug source (as well as perhaps, you know, dying and being brought back to life) in order for Agent Coulson (Clark Gregg) to get the idea that maybe S.H.I.E.L.D. aren’t necessarily the good guys here.

MARVEL’S AGENTS OF SHIELD has taken a long time to get here – like 14 episodes too long – but it looks like Coulson has finally come to this realization that maybe Centipede isn’t the only nefarious organization. Shield keeping this blue alien guy being used to create a super drug off the grid and having two soldiers willing to lay down their lives to keep it secret is something that must be a little fishy. Luckily Coulson has finally figured it out.

Coulson even asks Lady Sif (played by THOR/THOR: THE DARK WORLD star Jaimie Alexander) about blue aliens and she confesses that beyond the Frost Giants trying to conquer Earth a millennia ago, there has been no other blue aliens that have visited Earth – or at least that she knows. Still, the belief that the alien guy might be Kree is an interesting proposition (Kree-Skrull war please, yes, thank you).

Hopefully this will continue to develop. Fury being absent. Coulson being more than suspicious of what’s happening and some sort of resolution happening in the final episodes of the season. Now maybe this is just a set up for the next Marvel movie, CAPTAIN AMERICA: THE WINTER SOLDIER, which is heading to theaters soon, but it would be nice if this series actually developed its own mythology of S.H.I.E.L.D. and it somehow blends into the movies. Probably won’t happen but it is nice to think that this series could actually salvage itself from the horrible depths it has been at.

“Yes Men” was perhaps the biggest episode of AGENTS OF SHIELD of the year. Not only did it include the first real supervillain in Lorelei (Elena Satine) but it also featured the first real super hero in Lady Sif. Like I said, given this is episode 15 in the series, that’s way too long to have the first hero and villain show up. And I don’t include the origin of Gravitron or Blizzard among them considering these two were just men.

This episode had a lot going for it. I really liked that Ward (Brett Dalton) took Lorelei to Las Vegas, specifically Caesar’s Palace. They showed the Asgardians as truly much more powerful than humans – belting them across buildings and rooms like they were paper dolls. The fight between May (Ming-Na Wen) and Ward to see who the better grappler is. Keeping Sif a bad ass. Hot chicks in hot outfits. May being a snake in the grass (maybe).

Now only had they started the series here and built upon it, we’d be talking about how great this series is and how we can’t wait for the next episodes. But alas, we have to deal with the 14 episodes of crap that came before.