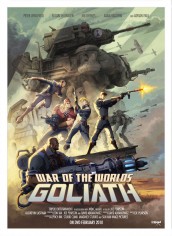 Exclusive Interview with WAR OF THE WORLDS: GOLIATH’s Adrian Paul 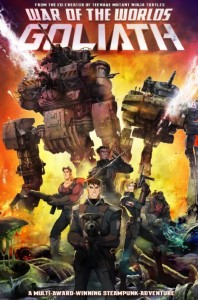 In the new animated feature film WAR OF THE WORLDS: GOLIATH, now in theatres and on VoD, World War I is about to break loose, but Earth has a bigger problem – a new Martian invasion. Good thing that, in this version of history, a multi-national task force has built weaponry that can stand up to the alien assault, with soldiers of all countries (and both genders) putting aside their differences to save our planet from a common enemy.

Adrian Paul voices one of the main characters, an Irishman who finds his loyalties tested by certain aspects of the conflict. Paul has done a great deal of film and television work, including producing and starring in the science-fiction series TRACKER, but he is likely still best known for portraying the immortal Duncan MacLeod in six seasons of HIGHLANDER: THE SERIES, as well as two feature film spin-offs. In a strange coincidence, Paul also starred in one season of the 1989-1990 TV series WAR OF THE WORLDS, a very different adaptation of the H.G. Wells novel.

Paul’s involvement with GOLIATH is much less of a coincidence. The movie is written by HIGHLANDER show runner David Abramowitz, who also serves as one of the film’s producers. He not only brought Paul aboard, but also enlisted three other HIGHLANDER: THE SERIES cast members – Peter Wingfield, Elizabeth Gracen and Jim Byrnes – to voice other main characters.

In a phone interview, Paul talks about WAR OF THE WORLDS: GOLIATH, as well as his Peace Fund charity that benefits children and Peace Fund Radio.

AX: Did doing the WAR OF THE WORLDS TV series give you any preparation for working on GOLIATH at all, or is it so different that you might as well have been doing something else?

AX: Was GOLIATH conceived as a HIGHLANDER: THE SERIES reunion, or did it just wind up that way?

AX: Did you pass each other in the halls at all, or did you just record all your dialogue separately?

PAUL: We recorded separately. I mean, I did – I think Peter and Lizzie recorded one or two of their scenes together. Peter and some of the others had done some of their lines and I was going off of what they’d done, which I could hear [in playback].

AX: It’s a plot point that your GOLIATH character is Irish. Did you and David Abramowitz discuss other aspects of his persona?

PAUL: I remember I wanted him to be a larger than life type of thing, and I think David agreed. We wanted him to be that big Lenny [from OF MICE AND MEN] type of guy, but more outspoken. It was a pretty short process, from discussing it to actually filming it.

AX: Did they show you sketches of what your character would look like, or did all the visuals come later?

PAUL: No, they sent me sketches. They had sketches of some of the characters. I saw my guy with the red hair – big, bulky type of guy.

AX: Had you done an Irish accent before this?

PAUL: No. And to be totally honest, I think I could probably have done a better one in some places. What happens is, sometimes you do what you think is an Irish accent, but sometimes and Irishman will go, “That’s not quite right, that intonation there.” Same thing as if I do an American accent – there are some sounds that are English still and people will pick up on it immediately, whereas an English person wouldn’t. So I think there are different types of Irish accents, and I would probably have preferred to have taken a little more time to specify it. I did listen to some Irish accents online.

PAUL: No. I think you have to approach it the same. In a sense, you are [bound] by what has already been written, because you can’t change the characterizations that they’ve already animated. Whatever the scene is about, hopefully it supports the general direction the character is going in. If it doesn’t, you don’t really have much of a choice in being able to change it – it’s already done. So [the actor’s choices are] in the intonation and the way the character is played, rather than saying, “Well, I wouldn’t say that line.”

AX: When your character is firing those massive guns in the scene and you’re in the recording booth, do you stand there and aim an imaginary gun?

PAUL: Yeah, you get into that [mindset]. I think voice acting’s very similar to doing green-screen, like George Lucas did in STAR WARS and so many movies do it today. You walk into a green box and you have to have a very active imagination. I think the same thing applies for voice actors – they have to imagine the surroundings that they’re in, whether it’s a dock surrounding, whether it’s quiet, whether it’s whatever it is, I think you have to really visualize that.

AX: Where did you do the recording?

AX: And the animation was done in Malaysia?

AX: What do you think of the look of the film, a mixture of the historical early twentieth-century and the science-fiction inventions?

PAUL: I actually really liked that, because I thought it gave it a real steampunk type of look. I’d seen what they’d done with some of the drawings and it looked like it was going in a good direction. Obviously, they’ve gone further after we’d done some of the voices – they did a lot more of the animated stuff, the drawings themselves. What they had already was very interesting, and I like the idea of being able to take it that far back.

AX: What other projects are you working on right now?

PAUL: I’m finishing writing a script that I’m supposed to be directing later this year or early next year – it’s based on a true story out ofHungary – as well as some other projects we’re working on funding currently through my company [Filmblips]. I’ve been doing a lot of that, as well as the Peace Fund, which is my charity. I’ve been doing my radio show each week, which is Peace Fund Radio [found at peacefundradio.org or latalkradio.com], where I actually bring together celebrities to talk about issues that affect kids, different issues – this week it was cancer, the week before it was homelessness. There are so many issues to enlighten the general public on, so I’m actually working a lot on that and restructuring our site.

I have Peace Fund Radio and the Peace Fund, which is the organization. Peace Fund Radio is really the mouthpiece of the organization, and highlights other charities. I’m trying to create a social media platform for charities to come together and discuss a lot of topics, so we’re putting that together as well. We’re putting a celebrity paintball competition for later in the year. I’ve got to pump the tournament I’m putting together for funding for that, so there are a lot of different aspects funding-wise and charity-wise.

PAUL: I’ve actually been interviewed a couple of times there [at Combat Radio]. My co-host is from Combat Radio, Ethan Dettenmaier, and so what I spend my time on now is Peace Fund Radio, which is every Wednesday at 11 AM, and Combat Radio happens to be our sister channel. It’s an online radio show. You’ll find all the links to past shows on there. In November, we were looking at 1.4 million a month [listeners] that we were reaching. So it’s actually not bad. We’ve been doing pretty good, and from what I hear, the numbers are up even more now. Because we are going into different cities around the world, it’s gradually making our numbers come up, and I think we’re talking about issues that people want to hear about, as well as hearing from celebrities.

AX: And is there anything else you’d like to say about WAR OF THE WORLDS: GOLIATH?

PAUL: I think it’s a good labor of love. It’s done by a non-Hollywood company and I think it shows that there is a lot of talent inMalaysia and other parts of the world that actually can produce a good-looking animated picture.