A satisfying conclusion to what became an appealing series 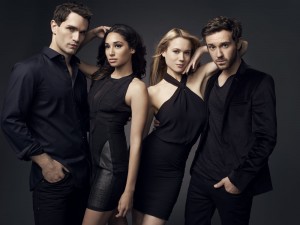 When the U.S./Syfy Channel version of BEING HUMAN premiered in 2011 with “There Goes the Neighborhood 1 & 2,” it seemed almost a photocopy of its U.K./BBC predecessor – a vampire, a werewolf and a ghost are roommates. Additionally, the U.S. version seemed to have less humor and more self-pity and sulking among its characters.

Well, here’s to growth and change. Four seasons later, BEING HUMAN U.S. has evolved into a show that’s warm, funny and vital, so much so that we’re genuinely sorry to say goodbye to the characters in the last episode, bringing things full circle with “There Goes the Neighborhood 3.” Fortunately, finale writer/show runner Anna Fricke (who co-developed the U.S. version with Jeremy Carver, based on Toby Whithouse’s U.K. original) gives our heroes a sendoff that’s more sweet than bitter, fulfilling their hopes for themselves and (mostly) for one another.

In the penultimate episode “House Hunting,” things looked dire. Ghost Sally (Meaghan Rath) had experienced a short trip to the future, where she witnessed a distraught vampire Aidan (Sam Witwer) snapping best friend Josh’s (Sam Huntington) neck. Coming back to the present, although a lot of horrible things have happened, Sally and Aidan have found they love one another, albeit they can’t do anything about it physically, and Josh and werewolf wife Nora (Kristin Hager) have not only reunited, but learned that Nora is pregnant (and since they’ve helped another werewolf couple deliver a healthy baby, they’re not worried any more about safety of mother and/or child). However, the house itself is evil, personified by the child Ramona (Helen Colliander). Not only won’t she let the roommates leave – despite the fact that they’ve been evicted – but she’s tried to poison each of their minds. She’s managed to convince Aidan that Josh destroyed Sally and Aidan is about to enact the homicidal scenario Sally saw in her flash-forward.

Sally and Nora are able to prevent Aidan from killing Josh, but Aidan is in a terrible spiral of despair. As a vampire, he will never get the door to the afterlife that greets ghosts – he will just turn to dust. Sally gives all of her energy to Aidan, making him human, but vanishing in the process.

Aidan is stunned, as are Nora and Josh. Although all of them mourn the loss of Sally, Josh and Nora are happy to finally move into Nora’s apartment and start a life together, while Aidan gets to enjoy normal food for the first time since being vamped centuries earlier.

However, Aidan’s age begins to catch up with him – all of his organs begin to fail. With a week left to live, he tries to get a newbie vampire to turn him. Josh intercepts this, and Aidan confesses his terror. He doesn’t want to die, and he’s sure that he’ll go to hell when he does. Josh says this is b.s.

Meanwhile, the old house still needs blood, so it kills a handyman hired to renovate the place. When Aidan, Josh and Nora read about this in the papers, they realize they have to stop Ramona once and for all. They agree to meet in an hour, but Aidan heads in alone. Ramona, mean as ever, causes Aidan to fall down the stairs just as Sally did, but Aidan, dying, ignites a fire that burns the place to the ground.

Before Josh and Nora can really mourn Aidan, his ghost shows up. Josh invites him to haunt them – but Aidan’s door appears. Aidan says his goodbyes and goes through – and Sally is waiting for him on the other side. Aidan wonders how this is possible, but Sally thinks there are more important matters to handle first. Since they are both in the same state of being, they can finally kiss.

A few years later, Josh and Nora wake up together from an outdoor nap, both having dreamt of their days back in the house with Aidan and Sally. We then see they have two young children, named Aidan and Sally (played by actor Huntington’s real-life offspring), and have the life they always wanted, even though it’s without their unforgettable friends.

Burning the house down seems an appropriate way to close out the story, and having the house itself be a dark entity also has a nice thematic resonance. The finale ties things up with perhaps too bright a ribbon for some, as all our people are conscious and happy, even if they’re not all in the same condition.

However, since Sally has spent the entire series looking for a bond, Aidan has spent it seeking redemption and cosmic forgiveness and Josh has spent it trying to control himself and be worthy of Nora, the finale had to show them either succeeding or failing – it couldn’t legitimately put any of this to the side and still feel like a resolution.

The tone of BEING HUMAN didn’t warrant apocalypse and after hearing Aidan get castigated by everybody except Sally at some time or other, it’s good to see her faith validated and all of that naysaying quashed. The same goes for Josh, although in his case, he spent more time berating and bemoaning his own state than anyone else did. It’s a relief to know he finally gets over it, accepts who and what he is and gets on with his life, and that Nora doesn’t have to contend with his freakouts. As for Sally, whose efforts to “fix” things so often led to disasters, it’s touching that her final Earthly action actually does make things right for the others.

Witwer is moving and a bit scary as Aidan acknowledges his most craven fears and, at the last, experiences joy. Rath gives Sally more gravity and wisdom than we’ve seen in the character before, and Huntington and Hager find a persuasive balance between wistfulness and resilience.

A lot of series reduce characters to the sum of their worst actions and leave them there. BEING HUMAN in its characters and in its storytelling believes in the redemptive power of friendship. The show handles its themes cohesively, so that the message and the delivery method fit together, and are borne out by the finale. In the end, BEING HUMAN decides its title means that there’s more good than bad, and while we’d be glad to spend more time with its people, they say farewell in a most appropriate manner.