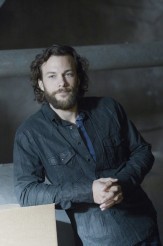 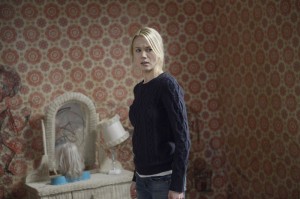 As BEING HUMAN ramps up to its series finale, we learn something in “House Hunting” that is startling, but makes total sense – the house isn’t haunted, it’s freaking evil. That’s right: Ramona (Helen Colliander) isn’t really the ghost of a murdered little girl, though that’s the form being used. Ramona actually is the house and, as revealed here, she feeds on blood and death.

Things start out on a reasonably high note, with Nora (Kristen Hager) telling Josh (Sam Huntington) that they are both moving into her apartment and going to make a proper start to their married life together. Aidan (Sam Witwer) decides he’s going to move into Pete’s abandoned trailer and invites Sally (Meaghan Rath) to join him there. Ramona, who they (and we) still believe is a ghost, begs them not to leave her alone there.

Then Ramona’s grown sister Beatrice (Mary Catherine Harvey) arrives. She apologizes to Aidan for sending him away when he tried to talk to her at her workplace. Beatrice explains that she and her twin Ramona had terrible parents. The folks joined a cult and, when Mom was pregnant with twins, evidently made a deal with a demon. Beatrice was raised as a regular child, but Ramona was locked in the upstairs room, not even given a name – Beatrice is the one who called her Ramona. Beatrice went to play with her on occasion, but on their tenth birthday, their parents threw another party. After that, Beatrice was told that her sister had been given away. She knew the truth.

Beatrice can actually see Ramona when Ramona enters the room. Beatrice believes this is because they’re twins. Ramona accuses Beatrice of not trying to save her, although Beatrice was ten years old at the time and didn’t even know what was happening. Ramona causes Beatrice to hemorrhage and die.

When the roommates attempt to flee, each finds him/herself alone in a separate room, but soon joined by someone they know. For Aidan, it’s former “son” Henry (Kyle Schmid), who insists that he’s a ghost and if Aidan only will kill himself, he can be a ghost, too (Aidan is certain that vampires have no afterlife). For Josh, it’s ex-fiancée Julia (Natalie Brown), who died after being hit by a car. She exhorts Josh to kill himself before he kills Nora. Nora is visited by Josh’s sister Emily (Alison Louder), who knows that Nora is pregnant and warns her to get out before Josh kills her. Sally finds herself in the bathroom, where Aidan’s ex-girlfriend Kat is in the shower, telling Sally that Aidan never loved her.

Sally is the quickest to realize that this isn’t real. She confronts Ramona, who at first attempts to play on Sally’s sympathies. However, Sally now realizes that Ramona killed Sally’s brother Robbie and has no interest in being friends – and that’s before Ramona explains that she really is the house. It was great when a vampire and a werewolf moved in, with all the carnage they brought, but since they’re trying to leave, the house needs blood.

Sally manages to escape and gets to Aidan before he kills himself. Aidan then goes downstairs, only to be confronted by his newer vampire “son” Kenny (Connor Price), who knows that Aidan lied to him. Josh, provoked into wolfing out, killed Kenny’s werewolf girlfriend Astrid, though Aidan blamed it on the werewolf pack (as the entire situation was the doing of pack leader Mark, it wasn’t a complete falsehood). Kenny wants revenge on Josh, and wants to kill Aidan for lying to him. In the struggle, Aidan accidentally stakes Kenny. With the stake wedged in but not yet penetrating his heart, Kenny says he got more of a life than he would have otherwise (he was a “bubble boy”) and got to fall in love. Just before he dusts, though, he is possessed by the house and tells Aidan that Josh destroyed Sally.

Sally rescues Nora from fake Emily and together, Sally and Nora stop Josh from stabbing himself, as the house has made him believe he’s killed Nora. They then go to Aidan, but Aidan can’t see Sally and thinks Josh has destroyed her. When Sally was time-jumping, she saw this incident, which ended with Aidan snapping Josh’s neck. Aidan grabs hold of Josh …

Aggh, no! Aidan, don’t do it! Everybody, get out of the house! The idea of the house as a conscious entity easily explains that it’s far more than coincidence that has made it such a disaster site. Colliander is perfectly scary, smarmy and smug, the ideal choice for the personification of such malice.

As to our regulars, we applaud Nora for finally understanding her own situation. The boys are more easily manipulated, though we certainly feel for them. Rath as Sally still has her warmth and humor, but she also appears to be maturing before our eyes.

One logic glitch in the episode scenario is Nora’s encounter with fake Emily. The house has said it wants them all to stay, but this seems more likely to get Nora off the premises than to off herself.

Otherwise, “House Hunting” is effectively spooky and disturbing while reminding us of how much we enjoy the central relationships here.