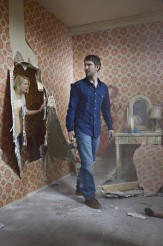 Big events in a strong episode 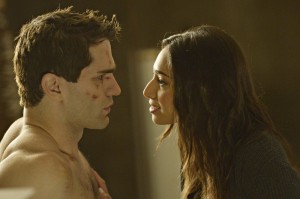 The mystery of the girl that Sally (Meaghan Rath) saw being sacrificed back in the ‘70s is addressed in the BEING HUMAN episode “Ramona thePest,” and it’s more complicated than we thought.

It turns out there’s a walled-up room in the roommates’ home. It contains the ghost of the young girl (Helen Colliander), Ramona, who tells them she has been stuck in there since her death, but she’s been able to hear all of them. She desperately wants to see her now-grown twin sister Beatrice (Mary Catherine Harvey).

Aidan (Sam Witwer) promises Ramona that he’ll find Beatrice and get her to come to the house, and he makes a valiant effort, but of course it’s not possible (at least in this instance) to credibly explain to a stranger that her sister’s ghost wants to see her.

There’s patch of blood on the floor of Ramona’s room, with strange marks on it that none of the roommates understand.

Aidan finds that his vampire “son” Kenny (Connor Price) wants to give up running Boston and run away with his werewolf girlfriend Astrid (Kalinka Petrie). Aidan gives Kenny what seems like a workable plan to make the other vampires think he’s dead and Kenny likes it. Trouble is, Astrid isn’t sure if she wants to go off with Kenny.

Aidan prevails on Astrid’s fellow werewolves Josh (Sam Huntington) and Nora (Kristen Hager) to persuade Astrid to come around. Josh isn’t sure it’s a good idea and stays upstairs, but Nora is willing. Astrid comes over – and aims a gun at Nora. The rest of the werewolf pack, led by Mark (James A. Woods). Mark et al are hell-bent on getting Josh, who can change at any time, to rejoin them and make more werewolves. Josh is locked in upstairs, but he becomes so angry that he changes. The door opens and he charges the rest of the non-transformed pack.

Aidan and Sally return home to find a massacre has taken place – wolf Josh has killed all the other werewolves (except of course Nora), including Astrid. Aidan hides Astrid’s body, then lies and tells Kenny the werewolves killed Astrid when she told them she wanted to go away with her lover. Kenny is grief-stricken, but sends the other vampires to help Aidan clean up the mess.

Aidan has failed to reckon with the possibility that Astrid’s ghost will visit Kenny and tell him what actually happened. Astrid – not meaning to cause trouble – explains to Kenny that Josh killed her, even though he didn’t mean to and that Astrid had held a gun on Nora. Kenny, vampire leader of Boston, is now very angry at both Aidan (for lying to him) and Josh.

Sally’s father Mr. Malik (Joseph Antaki) tells Aidan, Josh and Nora that the house has been sold – of course, he doesn’t realize his daughter’s ghost is haunting the premises. Both of his children have died here and he can’t bear to own it any more. They have one week to vacate.

Up in Ramona’s room, we see that there are now many more marks in the patch of blood on the floor. It’s Ramona’s score of how many people she’s managed to get killed. Uh-oh …

“Ramona the Pest” ups the jeopardy quotient considerably. Ramona’s little scoreboard makes us wonder whether she is now evil due to the circumstances of her death, or whether her death was an attempt to stop the evil she represents. The score in the blood is an effectively creepy image. For that matter, seeing the downstairs area pretty well painted with blood after Josh’s killing spree has visceral impact – the mostly safe, familiar space is now a zone of terror and death.

Guest star Antaki is very moving with little dialogue as he shows us the grief of a man who has lost his entire family.

Meanwhile, we’re growing ever fonder of the characters. Nora and Josh are finding one another again, Josh manages to not panic for once, and Aidan is beginning to realize that he is indeed in love with Sally, even if this does present a corporeal challenge.

The great thing about BEING HUMAN is that it has evolved into something that is normally the province of serious naturalistic drama. It is a show about characters who cannot ever do the entirely right thing, but keep trying anyway. There’s no steely-eyed rectitude here, just a flawed, warm, welcome humanity.