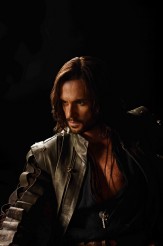 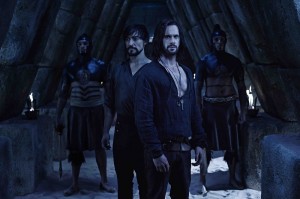 In DA VINCI’S DEMONS, created by David S. Goyer, English actor plays the young Leonardo da Vinci. Although the action/adventure/fantasy/drama embellishes aspects of da Vinci’s life, it’s true that the famed fifteenth/sixteenth-century Italian was an inventor, anatomist and political figure (not to mention a lover), as well as an artist whose work has been revered through the centuries.

In Season 2 of DA VINCI’S DEMONS, Saturdays at 9 PM on Starz, da Vinci is so determined to find the fabled Book of Leaves that he sets sail across uncharted reaches of the ocean and lands in what we now know as Peru, which looks amazingly lush and sunny (even though the series is actually shot in the less sunny United Kingdom).

Tom Riley, whose credits include I WANT CANDY, LOST IN AUSTEN and MONROE, is seated in a garden that is very green, if not quite lush and sunny, at the Beverly Hills Four Seasons Hotel, where he talks about his adventures as Leonardo.

AX: How aware were you of Leonardo da Vinci before you got involved in DA VINCI’S DEMONS?

TOM RILEY: I was aware of his existence, for sure, but it’s so weird. It’s a period in history, this Italian Medici era, that isn’t really taught in schools particularly. And if he is taught about, he’s taught in art class. You learn about his brush strokes, his work, his masterpieces. So I didn’t know that much about him in his twenties and thirties. We were never taught it. So I went back – I read these letters, I read the letters he wrote that were just so arrogant I couldn’t believe it, the journals and notebooks, exhibitions, anatomy, dissection work, and it just opened my mind that he was a completely different human being to the one I had any thought of in my head.

AX: Is it difficult or fun playing somebody with that much upfront ego?

RILEY: Both. Because it’s been fun knocking him off his pedestal in Season 2. I enjoy that. I enjoy trying to show the vulnerability behind the arrogance. But yeah, it’s certainly fun. It’s fun to play the smartest guy in the room, and then it’s fun to suddenly not be the smartest guy in the room any more. But it’s also difficult, because you want to be likable and you want the audience to invest in the central character and not be put off by the fact that he can achieve anything just by looking at it. It’s a balance.

AX: Did you have to work on how to convey that he’s figuring out something just by looking at it?

RILEY: I think really hard in those scenes [laughs]. I said it [before] – I’m just trying to remember my lines, and that’s maybe fifty percent true. It is hard, but a lot of the script does it for you, and that beautiful da Vinci vision look that they have, where we go into his mind, we see the sketches, and that covers anything that I’m not bringing through my eyes.

AX: How much does he worry about his effect on other people?

RILEY: Not enough. I think he begins in this season, certainly. Last season, he didn’t really care about the effect, the consequences of his behavior on the people around him. This season, the consequences of his behavior are going to start affecting him, and then he’s going to start thinking, “Oh, maybe I should reevaluate how I see things and how I behave.” So yeah, it’s a change.

RILEY: It is exactly the same amount of imagination. Because really, the entire time when you’re shooting something like this, there are always forty people, a hundred people, stood behind the [cameras], some of them looking bored, people are having cups of tea, and you have to zone those out. So it’s just the same looking over a vista that is Machu Picchu, as looking over a ship, as looking over Florence. It’s all the same – you’ve all got a bunch of guys in modern clothing and fanny packs just rolling their eyes [laughs].

AX: Leonardo gets into a lot of altercations. How much did you know about sword-fighting and punching and rolling and ducking before you got this job?

RILEY: Not as much as I do now. Fortunately, I went to a drama school in England called LAMDA [London Academy of Music and Dramatic Art], which had a specialized course on stage fighting. So I sort of came to it with a foundation that I wouldn’t have had if I hadn’t been to that school. So that did make it easier. I got better because we trained and trained, especially those difficult sequences. We’ve got a four-sword fight in the third episode [of Season 2] that we spent hours on, Kieran Bew, who plays Alphonso, and I. That was a really hard fight, because it goes like a rocket, there are so many moves and it’s so quick. We’ve both got two swords, both ambidextrous. Not easy. Lots of bruised knuckles.

AX: Are you actually ambidextrous?

RILEY: To be honest, both arms do as much. Each arm is going as hard and fast as the other one. I do a lot of scribbling with my left hand, just so when I do pick up things with the left hand, it’s not a pain, because I’m not a lefty at all, to write. A couple of times, it’s on me in Season 2 as I write with my left hand, so I have to be very careful that I don’t shake or wobble with my weak hand.

AX: What were the big surprises for you, either in the story or about Leonardo as a person?

RILEY: The big surprises for me were more of what I found out about him in real life, when I found out what a troublemaker and an anarchist and an anti-authoritarian he was – I just had no idea. I assumed he was always a wise old man. So that stuff was incredible. And then the things that he started building in the first season – I then went back to the scuba scene [where da Vinci invents scuba gear] for example in Episode Seven, for example, and I thought, “Well, this is ridiculous.” And then we went to Vinci, during the press tour, inFlorence last year, for Fox International, showing the rest of the world, and we went to Vinci and we saw that suit. He actually made it. And it worked. And you think, “How are you four hundred, five hundred years ahead of your time?” It’s insane.

AX: Have there been any scenes that were emotionally difficult to do?

RILEY: Because he’s such a passionate character and he swings from rage to despair and then back again, he’s fine, and people around him are going, “We never know where we are with you,” it can be hard to do that sudden turn on a dime. And those are difficult. It really depends how deeply invested you become in the character and in that character relationship. I find the scenes with Lucrezia [da Vinci’s mistress, played by Laura Haddock] quite easy to do – I’ve come to feel like I understand those moments. The more human, relatable moments are always the easy ones to invest in. The ones where you’re upset because your genius is failing you – that’s not something I’ve ever had to deal with personally [laughs]. But the more human aspect of things is stuff that I can anchor into.

AX: As da Vinci says, “Yes, that is a giant cannon that will shoot giant shells at you.”

RILEY: I’ve done that before. We’ve all done, “I’ve got a giant cannon in my garden” [laughs].

AX: Do you feel that Leonardo’s affect with his father, who’s played by David Schofield, is different than his affect with everybody else?

RILEY: Yeah. He’s so desperate for his father’s approval, even though he’ll never admit it to himself or his father. That desperate desire for legitimacy that comes from being a bastard unable to inherit wealth, unable to inherit land, all that stuff, it’s all bound up in the fact that his father’s not accepting of him, so he’s the one person who he just wants to go, “Come on, say I’m good. Everyone else thinks I’m a genius. Why can’t you say I’m a genius?”

I love working opposite David Schofield. In fact, I did a short film [AIR] with David Schofield in between the first and second season, I loved working with him so much. A friend of mine did it and just randomly said, “Oh, we’ve got David Schofield playing your dad.” I said, “Does David Schofield now play my dad in everything? Because that’s fine” [laughs]. He’s brilliant.

AX: What’s been the most physically uncomfortable thing you’ve had to do as da Vinci?

RILEY: Oh, well, that’s every day. I’m constantly in a harness, I’m constantly wet. I do a lot of riding in the final episode of Season 2 that’s really hard riding, galloping, and that was tough on my thighs [laughs]. So there’s always something.

RILEY: There’s so much good stuff in Season 2. I like Episode Five a lot. That episode where they get toPeru kicks the doors off the plot and goes, “Here you go, then, they made it, now it’s all changing.” From Season 1, I love that sequence with Lucrezia in [Episode] Eight, where we just talk, two characters in a room, just pouring out their secrets to one another. That’s always very appealing and very seductive for an actor.

AX: In Season 1, all of the plot strands seemed to be fairly intertwined. Season 2, we’re following several different storylines. Does that take some of the pressure off you as the series lead?

RILEY: It does. Certainly, by the end of the season, that’s not the case. I had less time off than it looks [laughs]. I read the script and went, “Hey, great!” and they said, “No, you’re still in every day, pretty much.” It kind of all weaves back together and I’m in every scene again. But certainly, as far as the perspective of everyone having to go off on their own journeys, you’re actually going to discover that those journeys are informing one another and they’re all going to figure into each other. It’s a quite intricate puzzle that’s been set up and Lucrezia is the glue that holds it all together, and Leonardo is very aware of what’s going on on the other side of the world, and Lorenzo [de Medici, played by Elliot Cowan] is having to deal with his thing, but he’s very much intertwined with Clarice [Lorenzo’s wife, played by Lara Pulver] back in Florence, so they intertwine more than they seem to.