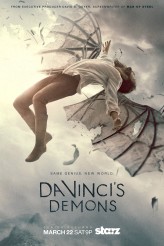 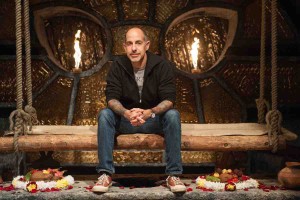 DA VINCI’S DEMONS, on Starz Saturdays at 9 PM, begins its second season March 22 pretty much where Season 1 left off. We’re in late fifteenth-centuryFlorence, and artist/inventor/all-round genius Leonardo Da Vinci (Tom Riley) has incensed the city’s ruler, Lorenzo de Medici (Elliot Cowan) by having an affair with Lorenzo’s mistress,Vatican spy Lucrezia Donati (Laura Haddock). Although Leonardo and Lorenzo are locked in combat, they actually have bigger problems, as the forces of Pope Sixtus (James Faulkner), led by the Pope’s relative Count Girolamo Riario (Blake Ritson) and the ambitious Francesco Pazzi (Elliot Levey), are battling Medici’s men in the Cathedral during Easter Sunday mass after an assassination attempt on Lorenzo fails.

Quite the suspenseful season finale, though Season 2 begins with a different perilous situation for Leonardo and Riario alike. Season 2 sees Leonardo’s quest for the fabled Book of Leaves take him toMachu Picchu, while Lorenzo’s efforts to secureFlorence’s safety lead him into danger. Other main characters have their own journeys.

Series creator/show runner/executive producer David S. Goyer has screenwriting credits that include BATMAN BEGINS, MAN OF STEEL and the BLADE trilogy (he directed the third film) and show-running experiences encompassing the BLADE series and FLASHFORWARD. It’s known he’s working on the CONSTANTINE TV series adaptation and the screenplays for the upcoming Batman/Superman movie and the Justice League film. However, today Goyer is seated in one of the hedge-rimmed gardens at the Beverly Hills Four Seasons Hotel to talk about DA VINCI’S DEMONS.

AX: When did you know that you had a Season 2 for DA VINCI’S DEMONS?

AX: So if you didn’t get picked up after that first-season ending, were you prepared to have the audience descend on you with pitchforks and torches? That was quite …

GOYER: Quite a cliffhanger? Starz was originally concerned about ending on such a cliffhanger, but I really like cliffhangers in my serialized television; it’s what makes me want to tune in. And I just did the ending that I wanted to, hoping we’d have another season. That’s all you can do.

AX: It was very eventful.

GOYER: Yeah. Wait until you see the end of this season.

AX: Season 1 was eight episodes. Season 2 is ten episodes. Did Starz say to you, “We’d like it to be ten episodes,” or did you say to Starz, “We need ten episodes to get through the story”? 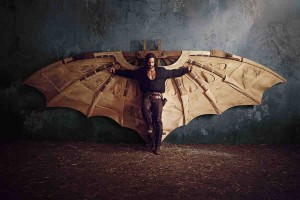 AX: Season 2 begins with a cliffhanger. Is the ending of this season going to bring us full circle to what we see at the beginning, or will the story move beyond that?

GOYER: Yes, we move further past. We will catch up. There are at least two episodes beyond.

AX: Did you already know writing Season 1 that if you got a Season 2, you were going to have this …

GOYER: I did. I did. I think Starz were a little nervous about that initially, because you do a second season, and I think the instinct is, “Well, let’s just kind of do more of the same.” But I felt like shows have to grow and evolve, and you can’t just keep treading water, and by the end of it now, they’re very happy, and they’re like, “Oh, this show works, not just within the walls of Florence – we can go other places.”

GOYER: Not that I know of.

AX: Why did you choose South America? Since we don’t know where he went, he could have gone to Africa …

GOYER: Yeah. Admittedly, Africa is more likely [laughs], but I wanted to pick a culture – one of my desires for the show, should the show keep going, is to depict different cultures beyond traditional Judeo-Christian European history, and the Inca Empire is far removed, in terms of their cosmology and their belief system from European as is humanly possible. And so I just thought it would be really interesting to see that clash of cultures. The Europeans regarded them as savages, but they regarded the Europeans as savages. And someone like Leonardo would have had a more nuanced take on it.

GOYER: Without question. I mean, Amerigo Vespucci worked for the Medicis and he was an absolute contemporary. There’s no doubt in my mind that they knew each other. And Amerigo Vespucci did go toSouth America.

AX: DA VINCI’S DEMONS shoots in Wales. When you as writer/creator decide, “We’re going to create Peru in Wales,” do you figure out at all how they’re going to do that, or do you say, “Good luck, production team”?

GOYER: No, I had some ideas. I did. I always thought we would do some plate photography and second unit inSouth America. Yes, it was more difficult to pull off than some things we did in the first season, but in the first season, we did Florence and Rome in Wales, which are set extensions and, trust me, the skies in Florence are not even remotely like the skies in Wales. So we did a lot of sky replacement and things like that. Once you’re already doing that, and you’re already doing a show that has a lot of digital sets and set extensions and virtual sets, it’s not as great a leap to say, “Okay, we’re going to do the same thing, but just further away.” It was harder – I’m not going to lie. It’s very difficult to find Andean extras in the U.K.

AX: Where did you find them?

GOYER: I said, “We need people from Peru and Chile,” and we had to ship some of them in. They were hard to find. We had a couple hundred. It’s also hard to research – I mean, the Inca didn’t have any written record. There aren’t a lot of Quetchua language experts in the U.K. [laughs], so things like that are more difficult.

AX: We see a more vulnerable side of Riario in Season 2. Did you know in Season 1 that you were going to want to make him more sympathetic in Season 2?

GOYER: Yes. That was always my plan. I always like the idea of taking two antagonists and forcing them to work together. I think that’s interesting.

AX: So – as you’re one of the people who crafted the story for all three BATMAN films – if Heath Ledger hadn’t died, might Batman have worked with the Joker in the third film?

AX: Is there anything you did in Season 2 of DA VINCI’S DEMONS because of how the performances were going in Season 1?

GOYER: Yes. That will be firmly established in the second season. He starts to become the man who will be Machiavelli in Season 2. I think it’s in Episode Two or Four – there’s a scene where Riario is talking to Nico, and he gives Nico some advice that is actually paraphrased from Machiavelli’s writing. So we’re suggesting that some of Riario’s lessons and strategies may have not been lost on young Nico. That’s the fun. Hopefully, if we go six or seven seasons, we can see Nico become that guy.

AX: Speaking of characters that have surprising legacies, do we get the term “patsy,” as in a fall guy, from the Pazzi family depicted here?

AX: We find out something very surprising about Pope Sixtus’ family this season. Did you already know that you were going to have that as a plot element when you were doing first season?

AX: Is that historical?

GOYER: Sort of. It has been suggested that Riario actually was Sixtus’ bastard son and not his nephew. There is also some evidence that [Sixtus had another relative, revealed in Season 2].

AX: Are there story elements that you’ve completely made up?

GOYER: Sure. I’ve always said it’s a historical fantasy. But one of the things that’s fun about this show is, there are three or four missing years in Leonardo Da Vinci’s life, and we know that he created [many thousands of] notebook pages at the time of his death and within a few years of his death, seven thousand of those went missing and they’ve never been found again. And so I maintain, look at all these incredible things that he invented within the pages that we know about. He must have invented God knows how many other things in the other pages that we don’t know about.

AX: Do you have a favorite plot thread, or a favorite mood among the storylines in DA VINCI’S DEMONS?

GOYER: I don’t know that I have a favorite. Look, there’s no question that the strand with Leonardo and the Incas is the most insane and flamboyant and outrageous. I will say that one of the pleasures of the season for me is seeing what Elliot Cowan, who plays Lorenzo, has done. Because he’s in a very different situation in the second season, as the story relates toNaples, and it is based in something that actually happened. Tom and Blake, who play Leonardo and Riario, respectively, they’re the flashiest characters and they’re the ones that I think a lot of critics and people obviously latched onto in the first season, but all of us I think are very admiring of what Elliot did this season, not to take anything away from the other performers, but wait ‘til Episode Six. He’s amazing in Episode Six.

AX: Over the course of both seasons, are there any characters/actors who have taken on depth that you hadn’t imagined at the beginning?

GOYER: Gregg Chillin as Zoroaster. I mean, he’s a delight and he gets to do a few more things in Season 2 than he did in Season 1 and I think he’s really fun. In Season 2, we meet Amerigo Vespucci. I love him as a character – Lee Boardman, who plays him, is amazing and he’s a really fun character to write for. But there are a lot of them.

AX: You have a background in, and sometimes still write for, the comic book industry. Does any of that play into how you approach this series?

GOYER: Sure. The most obvious way is that in Season 2, I hired two of the biggest comic book writers to write episodes. I hired Jonathan Hickman, who writes AVENGERS, and Matt Fraction, who writes HAWKEYE and wrote FANTASTIC FOUR – they co-wrote episodes this season and I just cold-called them and asked them. It’s another thing that’s fun about doing what I do – “Hey, do you want to come and work on my DA VINCI show for an episode?”

AX: Now, do you not write all the episodes because you just can’t do it with your schedule?

GOYER: Well, it’s two things. I guess there are some people who write every episode, but for me, physically, it’s really hard. But also, for me, again, one of the joys of doing a television show, as opposed to features, where I tend to write on my own, is working with a writing staff. It’s really fun to kind of assemble a baseball team where people have different strengths. I’ve liked hiring people that maybe would write these kinds of scenes better than I would, or have a real facility for this or that, and for me, that’s part of the fun of working in television. It’s much more collaborative. And I’ve discovered a lot of people.

AX: Is there anything else you’d like to say about DA VINCI’S DEMONS right now?

GOYER: Yes, I have tremendous fun, I absolutely love the cast and crew. I was really proud of what we’d accomplished in Season 1, and I was worried about whether or not we’d top it, and I think we have in Season 2.