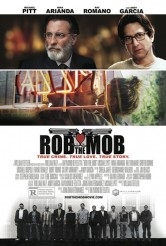 ROB THE MOB is based in part on events that happened between 1991 and 1992. Exactly how much is true is not as interesting a question as how writer Jonathan Fernandez and director Raymond De Felitta took such a promising premise and managed to flatten it out by emphasizing the wrong angles.

Tommy Uva (Michael Pitt) and his girlfriend Rose Marie (Nina Arianda) are two not-very-bright New Yorkers who wind up in jail after Tommy unwisely tries to rob a flower shop owned by little old ladies with shotguns. After Tommy and Rosie Marie both do time – in Tommy’s case, eighteen months – they wind up working at a debt collection agency run by a white-collar ex-con (Griffin Dunne) who believes in giving people second chances. Rosie is happy with her office gig, but Tommy is restless. Sitting in on John Gotti’s mob trial, Tommy hears testimony that Mafia clubs don’t allow patrons to bring guns inside. This gives Tommy the idea that robbing these venues is a great idea – guys with big wads of cash and no protection vs. Tommy’s newly-acquired Uzi.

At one point, Tommy quite accidentally gets hold of something that is of great value to both the Mob and the Feds. He and Rosie decide to try to use this as leverage in case the mobsters want to retaliate for the robberies. In the midst of this, two incredulous FBI agents (Frank Whaley, Samira Wiley) are hearing the robberies on wiretaps and aNew Yorkcrime reporter, Cardosa (Ray Romano), sees a great news story.

ROB THE MOB has all the elements of a great story, but the whole adds up to less than the sum of its parts. This is perhaps due to the decision to put Tommy and Rosie at the center of what is ultimately a drama, while depicting them as sweet but, well, idiotic. Pitt plays Tommy as wounded, warm, stubborn and very shortsighted, while Arianda plays Rosie as loving and resourceful within narrow parameters. Perhaps it’s in the writing, but neither performer gives their character even a hint of the darkness one would associate with their actions or the potential consequences of those actions. When Tommy goes to see his family, Pitt gives us his pain and resentment, but the movie doesn’t support the notion that trying to make things right at the old homestead is what’s really driving the protagonist. Tommy’s logic as to why this should all work out seems particularly skewed, and (at least as shown here) the fact that he doesn’t kill or maim a bystander with his automatic weapon appears a matter of dumb luck more than precaution.

For all the emphasis placed on Tommy’s inadvertent but important find, the actual handling (literally by the characters and figuratively by the film) of the item happens largely off-screen; it winds up being a maguffin when it seems like it should be driving the narrative in places.

There is also much made of the question of whether robbing criminals who make their money off extortion, racketeering and blackmail is a crime. This would have much more resonance if Tommy and Rosie had a philosophical investment in only stealing from crooks, but this seems more a matter of practicality – Tommy knows he’ll be facing unarmed opponents who won’t call the cops – than ethics. Romano’s character Cardosa is faced with a genuine ethical matter, but it comes late in the day and makes him look remarkably naïve for not anticipating where his actions may lead.

Many of the best moments in ROB THE MOB take place off the main route of the action. Andy Garcia is affecting and hits the right notes of ambiguity and regret as an avuncular mob boss who’d rather play with his grandson than plan hits, while Dunne is delightful as the corny but energetic entrepreneur who supports his oddball employees to a point.

In broad strokes, ROB THE MOB tells an intriguing tale, but its emphasis seems to fall on the wrong details.