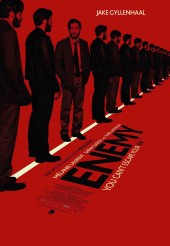 The film ENEMY is based on Jose Saramago’s 2004 novel THE DOUBLE. Saramago is a Nobel Prize-winning author, and it’s entirely possible the source material for this movie is brilliant. ENEMY, however, is not. If it is the chronicle of a disaffected, bored young college professor having a nervous breakdown, we don’t know enough about the man to care and the details of his delusion don’t intrigue us; if by some chance this is actually happening, our credulity is stretched to the breaking point – who behaves like this?

Adam Bell (Jake Gyllenhaal) has a decent job as a teacher of political theory. He also has a gorgeous and loving girlfriend, Mary (Melanie Laurent), but nothing enlivens him. Watching a movie on DVD that was recommended by a colleague, Adam spots an actor in a bit part who looks exactly like him. The actor, Anthony Denis (also Gyllenhaal), is married to Helen (Sarah Gadon). After an initial refusal, Anthony agrees to meet Adam.

There are people out there who like ENEMY – they’ve spoken up online; by all means, check out what they have to say about it. Viewers who genuinely see this as meaningful are coming at it from a very different perspective.

For the sake of those who are inclined to seek the film out, this review won’t go into further spoilery detail, but while Gyllenhaal does a good job of delineating Adam and Anthony so that we can tell who is who, we are given virtually no reason to care about either one. Laurent and Gadon are both perfectly lovely and persuasive, but their characters’ primary defining traits are moping, perking up and having sex.

Everything here is very symbolic and nothing is compelling or credible. We can’t invest in whether Adam and/or Anthony is losing grip on reality, because the “reality” here is paper-thin in the first place. However one sees what’s happening in ENEMY, as far as scenarios about being confronted with a doppelganger, the protagonists have some of the least interesting reactions imaginable.

ENEMY wants so much to be profound and provocative that it fails to ground itself in any way. True profundity springs from observations that are recognizable as the truth. This is artifice all the way round, and unoriginal artifice at that. The point here may be that a depressed person and a real or imagined other can have lives that are superficially different but emotionally equally empty. This is worthy of consideration, but it’s presented in a way where the easiest way to connect with the film is to ponder the difference between our existences and Adam’s and Anthony’s, and compare the emptiness they feel with how unfulfilled we feel observing them.

The movie could perhaps be regarded as a metaphor: viewers who have nothing in common beforehand are joined together by the experience of watching the film and identifying with the characters. In this instance, the characters are so flat that we can ask ourselves why we felt the need for the experience in the first place. This is arguably a decent experiment in existentialism, but it’s not a recommendation for going to this specific movie (or even being part of the experiment).