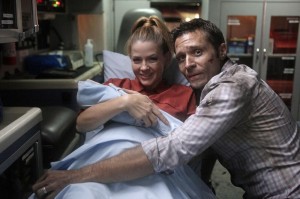 On CASTLE, now in its sixth season ABC, Mondays at 10 PM, it’s been a big season for a lot of characters. Not only have the title character (Nathan Fillion) and NYPD homicide detective Kate Beckett (Stana Katic) gotten engaged to each other; Beckett’s squad mate Kevin Ryan, played by Seamus Dever, is now the proud parent of a baby girl with his wife Jenny, played by Juliana Dever (Seamus’ real-life spouse). Jenny went into labor while Ryan and his partner, detective Javier Esposito (Jon Huertas), were trapped in a burning building, but it all ended happily.

Dever, originally from Flint, Michigan, has credits that include GENERAL HOSPITAL, ARMY WIVES and the feature film HOLLYWOODLAND. He’s hanging out with his CASTLE colleague Susan Sullivan, who plays Castle’s mother Martha, at a party thrown by ABC for the Television Critics Association (Assignment X has a separate interview with Sullivan from this event) and enthusiastically discusses playing Detective Ryan.

ASSIGNMENT X: Is there anything interesting you’ve learned during working on CASTLE?

SEAMUS DEVER: Yeah. I mean, this is the longest I’ve ever had a job in my life, acting job or anything. I’ve been on CASTLE for longer than I was in college and graduate school. So the idea of learning how to work with people perpetually – we’re going to be working together forever, so let’s all figure each other out and let’s figure where we fit – that’s been the biggest learning experience, just learning the people around me, and luckily, our cast is amazing, so it was not hard.

I work with the coolest people ever, so the fact that we’re still doing it after [so many] episodes now – I worked with Jon and Nathan on Friday thirteen hours. We worked our asses off all day long and that was like the first day we’ve done that in months. And it was like, “Oh, my God, this is just so much fun.” So I’m very happy.

AX: Is there anything you’ve learned in order to play the part, like how to carry a gun or jump off a building?

DEVER: Oh, I knew that stuff before, because I’ve played a lot of cops and a lot of those things. However, certainly what it’s like to be a cop and the respect and the knowledge and the dignity of what that takes. Actually, I really appreciate what cops do – that’s something I definitely learned is, they’re just doing their job. People give them a hard time, but they’re doing their job and you’ve got to see the other side of that first before you judge.

AX: Ryan went undercover with the Irish mob in the episode “The Wild Rover” last season. Was that one of your favorite episodes?

DEVER: Yeah, because I was challenged in a lot of different directions and I was allowed to do so many cool things that I didn’t know if I was ever going to get to do on the show. I think I used it to prove to people that I could actually do that, so I was very happy about the way everything turned out.

DEVER: That’s part of it. This idea of, “I shouldn’t be taking those kinds of risks any more,” it’s one of those things that Ryan is dealing with this season. Trying to figure out of this is really worth it – orphaning a child, widowing my wife – it’s one of those things that’s going to weigh heavily on him, like how does he feel about being a cop now that he’s a dad and that final sort of maturity phase we’re going to see.

AX: As an actor, are you hoping that he’s a responsible father?

DEVER: Oh, yeah. That’s always been Kevin Ryan’s streak. He’s always done the right thing. That’s rubbed up against Esposito quite a few times. Doing the right thing means more to [Ryan] than anything else, so I think he’s always going to do the right thing and it’s fun to see him challenged to make that choice in the face of loyalties. So it’s going to be interesting to see if that still happens.

AX: We’ve seen Castle get himself into some horrible situations as the only parent of a child …

DEVER: Yeah, true. He’s a good dad, but we did that thing last year when he went toParis. That was the first time they ever put Alexis [Castle’s daughter, played by Molly Quinn] in harm’s way, and it was a very brave thing for [series creator/show runner] Andrew Marlowe to do, and I’m glad he did it, because he said that he was only going to be able to do this once, so he’s got to make it count, and it was a great two-parter, so I think the risk was worth the reward.

AX: Are Ryan and Castle ever likely to discuss what it means to be a father who puts his life on the line, or is Ryan going to discuss that with Esposito?

DEVER: I think Ryan’s always very cautious to talk to Esposito, because Esposito is sort of like Tom Sawyer – he’s always just feeding him a line of crap that he believes in and for some reason, Ryan believes that. I don’t know why he does that, but that’s their relationship – Huck Finn and Tom Sawyer [laughs].

AX: You and Jon Huertas did a dramatic reading of JERSEY SHORE in the style of a Shakespearean production. Are any more of those in the pipeline?

DEVER: We actually did a short film [SEQUESTERED] together over the summer, so yeah. There’s stuff coming. We’re always doing something. I had dinner with him last night. We’re always talking about doing more and doing other things, so yeah. We’ll see. Maybe someday there will be a Ryan/Espo spinoff, you know what I mean? He’s always talking about it, so we’re formulating things.

AX: You’ve done Comic-Con with the CASTLE group. How was that experience?

DEVER: It was fun. I didn’t go [in 2013] – we went a couple years ago, but whenever we’ve gone, it’s fun. You get all these people that follow you on Twitter – all of a sudden, you’re seeing them in front of you and they’re saying their Twitter handle, so you say, “Oh, that’s you,” so you’re putting a face to a name, and that’s a lot of fun, because you don’t get to do that very often.

AX: Susan Sullivan says you’ve both been doing charity lunches that benefit the Antaeus Theatre Company and L.A. TheatreWorks. People pay to have lunch with you …?

DEVER: And we entice them with sparkling conversation and we feed them lovely meals. We [separately] did a bunch of them in the past. They’re fun. It’s always a fan. There was a woman who Tweeted me, who said, “I’m getting my visa approved so I can come and have lunch with you and Susan Sullivan.” There’s a woman who’s buying lunch with us from overseas. She’s planning her trip around our lunch. We have great fans.

AX: What do they want to talk about when they have lunch with you?

DEVER: I think they want to get to know you personally. They are probably going to be very interested to see if Susan is a lot like she is on the show [laughs]. And she’s going to see parts of that, and parts of who she really is, which is myself as well, so yeah. It’ll be fun. They ask good questions.

DEVER: Keep watching. Let’s go ten more years. Let’s be the show that takes me into my late fifties [laughs].