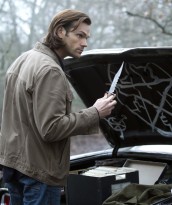 An episode that moves the plot forward, with Crowley, Kavan Smith and no sulking 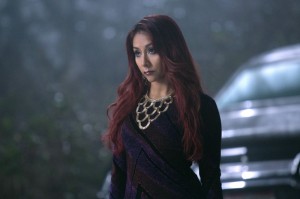 With “Blade Runners,” SUPERNATURAL moves the season arc forward, resolves a mini-arc, has a great guest star and no visible sulking. As the characters would say, it’s a win-win.

King of Hell Crowley(Mark A. Sheppard) has developed an addiction to human blood, largely thanks to the actions of Sam (Jared Padalecki) and Dean (Jensen Ackles) while he was their captive. Rather than drinking like a vampire, he shoots it up via hypodermic, though the victims still wind up dead.Crowleyis holed up in a hotel with sexy demoness Lola (Rebecca Marshall) – until he finds that Lola has been spying for Abaddon,Crowley’s rival for the throne of Hell.Crowley kills Lola and finally answers the phone the next time Dean – who shows up on Crowley’s caller i.d. as “Not Moose” – tries to reach him.

Dean and Sam are both horrified and exasperated at Crowley’s state when they find him. They chain him up until he has gone off blood cold turkey and they can resume their search for the First Blade, the only thing that can kill Abaddon. Cain threw it into the Marianas Trench, but after doing some deep sea diving and poking around,Crowley knows it’s not there any more. It got scooped up by a submarine and has gone through multiple owners.

The Winchesters and Crowley track the blade to a museum and then to a private collector who turns out to be Cuthbert Sinclair (Kavan Smith). Sinclair was kicked out of the Men of Letters two years before the 1958 slaughter. He has since used magic to stop aging and to create a sanctuary so well-warded that it can’t be seen from the outside.

Sinclair also has a menagerie of magical creatures. He allows Sam and Dean in, only to throw Sam back out. Sinclair wants to keep Dean for his collection, since Dean has the Mark of Cain, which goes so well with the First Blade (only someone with the Mark of Cain can successfully wield the weapon). Sam and Crowley use a spell to get back into Sinclair’s stronghold. Sinclair captures Sam and starts to torture him, but Crowley gets Dean free and Dean decapitates Sinclair with the blade. We (and Sam and Crowley) see that once the Mark of Cain is activated, it takes Dean a while to calm down.

Sam has observed earlier to Dean that once they have the blade, they don’t need Crowley any more. Dean clearly has qualms about killing someone who’s been an ally lately, though Sam has no such compunctions (in a reversal of their usual positions). This turns out to be a moot point, since Crowley has guessed where this is all going to snags the First Blade himself. He says they’re right about not being able to trust him and he can’t trust them – he’ll give the blade back when they can find Abaddon.

“Blade Runners” snaps right along. The banter between Crowley and the Winchesters is consistently amusing, and brings out the best in Padalecki, who plays Sam’s “I’m so incredulous that I can’t figure out how to express how angry I am” moments beautifully. Sheppard continues to embody Crowley perfectly. There are also swell little riffs, like Crowley, in the depths of his addiction, howling at the Winchesters, “You don’t know what it’s like to be human!” and then all three of them silently reflecting on that remark.

The great addition here is Smith – android Deputy Andy on Syfy’s late, lamented EUREKA – who has refined creepy Stepford cheer to a high art form. It’s a shame he wasn’t cast in a longer-lasting role. There’s also a cameo from Nicole “Snooki” Polizzi as herself as a demon. We’re noting this fact and moving on.

“Blade Runners” has wit, smart dialogue, assured acting and furthers the seasonal arc. It’s pretty much what we hope for when we tune in to SUPERNATURAL.