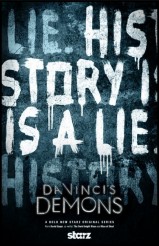 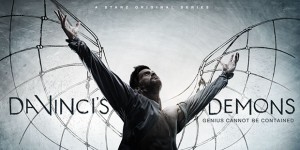 While it’s not GAME OF THRONES (but really, what else is?), DA VINCI’S DEMONS looks in its opening episode “The Hanged Man” to be a lot of fun, with a title hero (Tom Riley) who’s a cocky genius, though not arrogant – as he points out, arrogance would indicate that he overestimates himself, and he really does seem up to anything.

Historically, Leonardo Da Vinci was a true renaissance man, and not just because of his era. He was an artist, an investor, an anatomist, and much more. Created by David S. Goyer, DA VINCI’S DEMONS takes this and runs with it, so that by the end of the first episode, Da Vinci is at once having a dangerous affair with Lucrezia Donati (Laura Haddock), designing siege weapons for the ruler of the city of Florence (Lucrezia’s other lover) and trying to fathom his connection to the mysterious group known as the Sons of Mithras, while doing his best to infuriate his hidebound, aristocratic father (David Schofield). Meanwhile, the Pope (James Faulkner) is plotting against the Medicis of Florence, and various factions are concerned with a tome known as the Book of Leaves.

In other words, there’s a lot going on, with plenty of sex – most of the characters here, male and female, are quite lusty – and some gory violence. Riley as Da Vinci is suitably charming and the banter is engaging, particularly when Leonardo’s pal and sometimes employee Zoroaster (Gregg Chillin). For viewers not well-versed in history, exposition is laid out simply and easily –Florenceis a place where ideas flourish, Rome looks toNaplesfor military aid, and so on.  Production design is suitably sumptuous and deep, transporting us to another place and time, and the cast is very attractive.

Given his well-documented accomplishments, we can easily accept that Da Vinci is also a gifted swordsman (hey, knowledge of human anatomy serves Robert Downey, Jr.’s Sherlock Holmes nicely) and that he can sketch from memory people, animals and objects he’s only glimpsed briefly.

As for the potential for war between the Church and Florence, we’re not especially invested in that just yet, apart from providing a market for Da Vinci to sell his weapons designs (good grief, we’re rooting for the arms dealer), but it has potential, and the laudable, experienced British actors playing the rulers of the day give it suitable gravitas. Faulkner, who was Herod in I, CLAUDIUS, provides a particular piece of television history.

On the mystical side of things, Alexander Siddig plays an enigmatic Turkish visitor to Florence who shares a hookah with Da Vinci and offers cryptic hints about the Brotherhood of Mithras, some forgotten aspects of Da Vinci’s childhood and the artist’s “fate.” Siddig has a level of comfort in the role, suggesting the man has a life beyond simply trying to get Da Vinci to do, well, we aren’t sure yet, but we’re curious.

DA VINCI’S DEMONS gives us an epic background, like THE BORGIAS or the aforementioned GAME OF THRONES, but with a single main character who is heroic – he champions those who can’t defend themselves, he’s brilliant and he’s reasonably witty, all good qualities – rather than deeply morally ambiguous. Unlike the protagonist of SPARTACUS, Da Vinci has cause and indeed need to be lighter-natured. This is the action/adventure fun side of historic mythology, rather than its grimmer aspect. There’s grit and blood and bawdiness here, but there’s also a frequent sense of playfulness and even joy. The debut of DA VINCI’S DEMONS is a pleasurable experience and the show looks to continue as it has begun.