©2013 Mazda
The exterior of the Mazda5
Reviews

The look and feel of mini-vans have changed considerably in the last ten years, but Mazda has delivered a wonderful new six-passenger vehicle with the MAZDA5.

It’s a spacious and very innovative little car that makes the passengers feel like they’re in the driver’s seat.

With a size that’s about the same as standard SUV, the Mazada5 can fit six people comfortably in the car. Even cooler, the sleek design has 2 sliding back doors (more akin to a van) so it’s easier for the passenger’s to get in and out of the car, particularly in the back row. 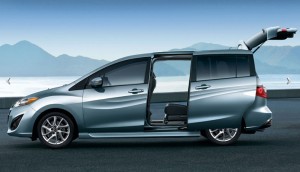 The two middle seats are also crafted like the front seats. They’re individual and comfortable and they even come with their own controllable central heat and air.

On a trip from Los Angeles to San Francisco, the Mazda5 proved to be a perfect family vehicle. It handled the long stretch of driving on I-5 rather well, but it also proved to be very gas efficient. Gassing up was around $45.00 and one tank of gas pretty much lasted from L.A. to our final destination point in Northern California.

Weather proved to be very unpredictable during this trip. Sunny in Southern California, but random rain and thunder showers in Northern California. The car weathered those extremes (no pun intended) perfectly riding smooth and calm.

The look of the Mazda is quite traditional for a mini-van, but its curves and design hint at the coolness it has inside. The sliding side doors is one of the best features.

If you need to use the mini-van to transport larger items, it gives you the space to do so. 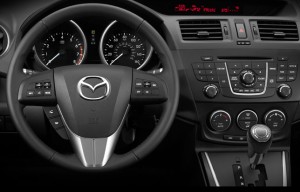 The front seats are very spacious and there’s tons of leg room. The design of the middle seats also gives adequate leg room and are adjustable as well.

The very backseats, are traditional backseats – no special treatment there. However, if you fold them down, it gives you a much larger trunk space.

The seats are quite nice and have a very snazzy looking dark red seams.

As always, the Sirius radio package is a plus. Where I traditionally bring loads of CDs on a trip, I found myself listening to the various Sirius stations instead my CDs. The variety was great and the playlists on almost all the Sirius stations trumps just about every radio station out there. 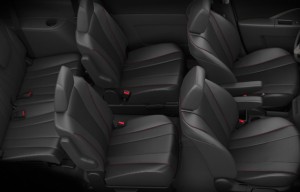 The biggest problem with mini-vans and SUVs is they can get tossed around on the road easily due to wind, but no such troubles here, especially on the windy I-5. The Mazda5 drives so effortlessly, you almost need cruise control to keep the car driving at the posted speed. It often doesn’t even feel like you’re moving as fast as you actually are.

The cruise control is smooth as well. It adjusts to going up and down effortlessly and you can hardly feel the changes to stabilize the speed.

Of the criticisms of the Mazda5, the biggest ones are general ones I have with most new cars – the lack of an easy place to store your cell phone and other items. There’s a small area near the USB port where you can sort of squeeze your phone into, but it’s not nearly enough.

The center storage place also lacks a top on it to cover up any important items as well.

Ultimately what you’re reviewing is the car and how it gets you around. Storage space is a minor issue when you have such a well-built and sturdy vehicle. It’s a great family car and it serves you well on long trips. Gas mileage is key, especially with prices so high, and this thing really gives you excellent bang for your buck.

The Mazda5 is a sweet looking car with ample horsepower, tons of room and fun vehicle for around town or on long trips and most of all, it’s also priced right.