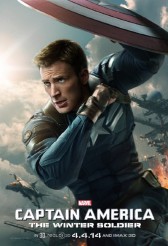 Whether you’re tracking the Marvel universe in all its interwoven facets – IRON MAN, THOR, THE AVENGERS, AGENTS OF SHIELD on TV – or just enjoying (or not) the individual projects as they appear, some of the story developments in CAPTAIN AMERICA: THE WINTER SOLDIER are surprising. Granted, they will be a lot more startling to those who are following the entire chronicle, as what happens in SOLDIER will have inevitable impact across the board. However, the film works as entertainment apart from its service as a building block in the larger structure.

CAPTAIN AMERICA: THE WINTER SOLDIER works fine even if you haven’t seen (or don’t clearly remember) the 2011 feature that introduced Cap, aka Steve Rogers (Chris Evans). Steve was a soldier in WWII who was put through an experimental program and came out greatly enhanced. An accident put him on ice (literally) from the end of the war until 2011. Since then, he joined up with the rest of the Avengers to saveNew York from an alien invasion, and now he’s an agent of the secret world-saving organization S.H.I.E.L.D., using his abilities to save people under the command of S.H.I.E.L.D. director Nick Fury (Samuel L. Jackson).

However, Steve is getting fed up with Fury’s half-truths and misdirection when it comes to missions. He’s considering quitting when a series of crises bring him face to face with a menace he thought long gone, as well as a specific nemesis that is personally harrowing.

As with the first CAPTAIN AMERICA, the screenwriters here are Christopher Markus & Stephen McFeely, working from a story by Ed Brubaker, based on the comics by Joe Simon and Jack Kirby. Markus & McFeely do a good job of maintaining a sense of continuity while keeping the action vital. Directors Anthony Russo & Joe Russo stage some truly whiz-bang, pulse-pounding sequences, including a car chase that brings new vitality to this genre standard.Jackson has often been relegated to showing Fury’s authority with a ferocious glower; here, the character and actor both get to show off their badass credentials, and it’s a welcome sight. The directors also allow the human moments time to breathe, letting us get a sense of the characters as people without slowing the pace.

As always, Evans radiates decency, good humor and resolve as the non-ironically heroic Steve. Scarlett Johansson maintains an enigmatic quality as Natasha Romanoff, aka Black Widow, while delivering impactful body blows and quips. Anthony Mackie, new to the group as a recovering war veteran who befriends Steve, is charismatic and capable. Sebastian Stan brings the requisite physicality and tortured quality to the character he plays. As for Robert Redford, he’s entirely persuasive as a man who is used to being in charge and used to convincing others that he’s right.

CAPTAIN AMERICA trades mostly in science-fiction rather than fantasy, more invention-driven than supernatural. Still, the abilities of computers in this film are so awesome that no magic is needed. The look combines high-tech and retro tech, juxtaposed with contemporary settings for maximum effect. It’s mostly fun and involving, even if there are moments where we’d trade a few punches, kicks and crashes for moving the plot forward. There are also bits of total obfuscation – there’s a scene where an important switcheroo has happened, but there doesn’t seem to be a logical moment when it could have taken place, nor do we have a clue what’s happened to that which has been switched out.

CAPTAIN AMERICA: THE WINTER SOLDIER has a storyline that in some ways is pretty rote, but is engrossing due to the way most of its characters work, the physicality of the big set pieces and the fact that the movie is a game-changer in the storytelling of the Marvel universe. The characters are fun and the stakes are high. Take away the film’s important position on the big Marvel universe chess board, and what’s left is a movie that, like its hero, takes tradition and proudly puts it to good use.