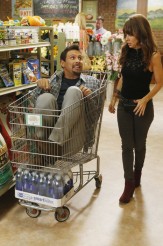 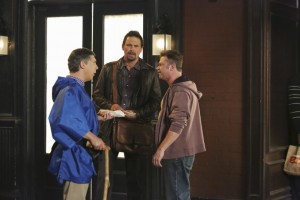 In ABC’s half-hour comedy SUBURGATORY, now in its third season Wednesdays at 8:30 PM, Jeremy Sisto stars as divorced dad George Altman. In the series created by Emily Kapnek, George has moved fromNew York City to the suburbs to provide a safer environment for his teen daughter Tessa (Jane Levy) – much to Tessa’s initial exasperation.

Sisto, originally from Northern California, has been a regular on several major series before, notably LAW & ORDER and SIX FEET UNDER, and worked in many feature films, but SUBURGATORY is his first lead in a TV comedy. At a party thrown by ABC for the Television Critics Association, he talks about his work on SUBURGATORY, producing his first feature film BREAK POINT – a comedy/drama about tennis – along with an accent for a movie that didn’t work out as planned.

AX: Has SUBURGATORY evolved the way you expected it to evolve, or have you been surprised by some of the turns?

JEREMY SISTO: Yeah. I mean, from the pilot, I would have never even thought my relationship withDallas, played by Cheryl Hines – she’s funny and she’s great – we got together for a long time, a real romance, and in the pilot, I didn’t even think that was what they were thinking. So from the pilot, it’s so hard to even know what’s going to happen. But pretty soon, I got the idea of what it was, because Emily knows her show, and it’s great to be on a show where [the show runner] knows what she’s doing. That’s a hard thing. That’s pretty impressive.

AX: Do you think that George might get back together with Dallas, and is it more fun to play opposite Cheryl Hines when the characters are attached or detached from each other?

SISTO: It was pretty crazy when they were attached. The show is pretty unique, because sometimes it’s super-broad, and sometimes it’s super-real. And I don’t watch all the comedies on TV, but from what I’ve seen, I think that’s a pretty unique thing. The downside is, some people are going to respond to one [aspect] and not the other. That’s just part of the deal. But when they were together, it was ripe for crazy behavior fromDallas. And these writers love exploring that crazy behavior. There was a lot of interesting stuff there, trying to convince her to be herself. But I think ultimately there’s something more exciting about the dynamic when it’s unrequited.

AX: There’s been conflict, reconciliation and a kind of new negotiation between George and daughter Tessa. How do you see that going forward?

SISTO: I think there’s a real base, a foundation of love. They’ve got a really good relationship, ultimately. There are always going to be issues, especially in living together – she’s his daughter, there are always going to be some things – but ultimately, there’s not as much drama between the two of them as I think some people would like. But the truth of the characters is, this is a guy who very obviously has given his life up to be a good father, single father, and this is a girl who is self-aware enough to know that that’s the case. So the truth of the characters is that ultimately it would be difficult to get them into places where they’re truly, truly at odds with each other for a long-term thing.

AX: George left suburbia for a little while. Do you wish that had lasted longer?

SISTO: The segment in between these two seasons [2 and 3]? I think there’s a really fun story there. I think in this particular instance, and because Malin [Akerman, who plays George’s ex/Tessa’s mom Alex and is now starring on ABC’s TROPHY WIFE] had to go do her other show, and it makes sense that Malin’s character would disappear, that [George and Tessa] starting right back where we started off, except with a different intention, was the right way to do this season. But definitely, I would love to see them have to deal with city life again. There’s [an episode] where I start to get sucked in again, and I’m like, “Oh, I need to go to the city,” so I go into the city with Fred [Chris Parnell]. I’m like, “Fine, you can come, but it’s not going to be tourist stuff.” Fred’s like, “That’s fine, let’s go. I’m just going to get my walking stick and we’ll be on our way.” So we go into the city and it’s kind of a mess. George can’t handle it any more. So I think there’s a whole season of that, if we get that far.

AX: Some of the previously regular cast members – Alan Tudyk as George’s buddy Noah, Parker Young as Tessa’s friend Ryan and Rex Lee as high school staff member Mr. Wolfe – are either gone or have very reduced roles this season, reportedly due to budget cuts …

SISTO: Alan and Parker left the show because of whatever reasons, or are on less of the show, but it made sense perfectly story-wise. Noah needed to go away, he put himself away, and Parker went off to college. So it doesn’t feel forced. Of course, people within the industry, reporters and the critics, are going to know the behind-the-scenes stuff, but the only one that feels maybe a little odd is that Rex is gone. He’s missed. He was a nice component at the high school, and so we miss him, but the other two, it makes sense where they went.

AX: It seems like Alan Tudyk is doing a lot of work for Disney feature animation – he’s one of the bad guys in FROZEN and he won an Annie Award for Supporting Male Performance for WRECK-IT-RALPH …

SISTO: That’s awesome. He should’ve. He’s great. He’s so good at those voices. He’s a wonderful person, too.

AX: You played a vampire with a Russian accent in the 2006 movie THE THIRST …

SISTO: I suck at accents. The worst-conceived idea I ever had. I thought, “Every line, I’ll do a different accent.” It just came off sounding like a bad accent [laughs]. There was a Russian one, but then I’d go into English – I’m not a real accent guy, so they probably weren’t really different enough to tell what was really going on.

AX: SUBURGATORY is your first half-hour comedy as a regular. What’s the difference between being in that rhythm for several seasons, versus several seasons on a drama?

SISTO: Well, each one was different. SIX FEET UNDER and LAW & ORDER were very different, too. In SIX FEET UNDER, I was just a supporting character, so I worked a couple days a week, whereas LAW & ORDER, I was there all the time. It’s also just the diversity of scenes and the scope of possibility of what I could be up to. But yeah, in general, I really like it. It’s similar in a way. I’m trying to find moments that feel spontaneous and that I’m surprised there, in the moment. I think & ORDER was that way, too, but it was much more subtle, much less flustered. And I get more flustered as a real person, and so did Billy Chenowith on SIX FEET UNDER, so I definitely enjoy that more than the LAW & ORDER thing.

AX: With comedy, is it easier in the sense that you can tell when you’ve hit the target, whereas with drama …

SISTO: No, because no one’s laughing on the set. That’s why I couldn’t do a live-audience [show], because I always think that people are courtesy-laughing me. So it’s actually much better that no one’s allowed to laugh. Because you really don’t know, and I’ll do a thing and then sometimes after the scene, I’ll come back and people are still laughing at the monitor. I had no idea. So you can make yourself think that you’re not being funny. I’m not trying to be funny, because I can’t get my head around [all the possibilities of what other people might find funny]. I’m just trying to do a similar thing when I’m doing a drama, which is get myself caught off-guard, so I’m caught up in the moment. And that’s fun to watch, when somebody loses himself. So I definitely like playing that kind of thing, more than somebody who’s way cooler than I am [laughs].

SISTO: I do. I produced and starred in a movie that I also co-wrote the story for that I’ve been working on for a few years. It’s called BREAK POINT, it stars me and J.K. Simmons and David Walton and Amy Smart and Adam Devine, and it’s a film I’m proud of, and I worked very hard on, and I’m excited about it. [It premiered at] South by Southwest [SXSW Film Festival].

AX: Is this the first time you’ve produced?

SISTO: Yeah, to this level. From the beginning – I went to my buddy, the writer [Gene Hong] – we used to talk about ideas when we played tennis – it’s about tennis, and so the idea started there – to the finish line, I’ve never been involved like that. It was exhausting and it was way too much drama, really, trying to figure out people’s opinion – it’s a difficult thing and at the end of the day, I wasn’t sure if it was worth it, but hopefully, now that we have people seeing it, and I think people are enjoying it, there is a sense of gladness that I followed through. There are a lot of things that I haven’t followed through with in my life – I’m one of those people who have a ton of creative projects – so it’s nice to close one of them out.

AX: When you were working on the script and producing, is there any kind of time conflict between doing that and working on SUBURGATORY?

SISTO: It’s an ensemble. With a show like this, it’s not too much for me. I like to kind of come to it fresh, and I like to spend time with my family, too. The thing about acting is, you do it and have to walk away. Somebody else is piecing it together.

AX: According to IMDB, you directed a short film, ASLEEP IN THE PARK. Are you looking to direct features as well?

SISTO: I don’t know about directing. I mean, the thing about directing is, there are just so many decisions to make. Some of them I don’t care about. You have to make a decision about something you don’t care about, like what color do you want this thing? And I don’t really care, but then you make a decision and then you’re making decisions that you don’t care about. I think it’s also the collaboration. You’re collaborating with so many people as a director and I don’t want to step on people. I want them to create. But as a director, I’d feel kind of weird about just being somebody who’s letting everyone else do the work and take the credit for it [as director], so it’s a little confusing. Writing’s before everyone else gets in there.

AX: When you’re writing, you don’t need to worry about anyone else’s feelings …

SISTO: Yeah, exactly. You’re on your own. I’m pretty neurotic, basically, and I might be too neurotic for directing, I might not. We’ll see.

AX: And where would you like to see George go as SUBURGATORY moves forward?