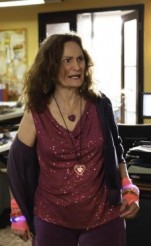 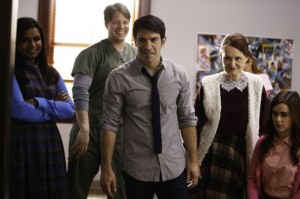 Whether or not you know her name, it’s almost certain you’ve seen Beth Grant’s work. The Alabama-born actress started her onscreen career with an episode of B.J. AND THE BEAR. Since then, she’s been in stage, TV and film projects, including RAIN MAN, FLATLINERS, THE GOLDEN GIRLS, SPEED, THE X-FILES, FLAGS OF OUR FATHERS and DEXTER, to name a handful of credits. Last summer, Grant appeared in the award-winning Web comedy HUSBANDS: THE SERIES as a Mormon mom supporting her son (Sean Hemeon) as he remarries his boyfriend (Brad “Cheeks”Bell).

Currently, Grant is a series regular on THE MINDY PROJECT, now in its second season Tuesdays on Fox and renewed for a third. The half-hour comedy, created by and starring Mindy Kaling, centers on Dr. Mindy Lahiri (Kaling), whose life is complicated by romance (and/or the lack thereof). Grant plays Beverly, who started out homeless but now has a job at the hospital where Mindy works.

At a party thrown by Fox for the Television Critics Association, Grant talks about what’s new forBeverlyand her overall career.

AX: What are the differences for your character Beverly between Season 1 and Season 2?

BETH GRANT: I think she’s trying very hard, she’s still very odd, and she’s very free with her odd comments, but she dresses a little bit nicer and she really does the work, and she’s learning the computer, so I think she’s more a part of the group now. Even though she’s odd, they kind of put up with her and they love her, I think.

AX: Did you ask for her to dress a little nicer?

GRANT: Well, the costume designer and I talked about it and he felt like since she had a job – because I was homeless last year and just coming back to work – now that I’ve been working for awhile, he thought she would have [clothing  that is] very similar, I mean, most people won’t even know the difference, but it’s just a little bit nicer.

AX: You play a lot of ominous people …

GRANT: In DONNIE DARKO and the one on CBS, CRIMINAL MINDS. I know a lot of people felt that was a terrible character.

AX: CRIMINAL MINDS guest characters tend to be. Is it a nice change of pace for you to do a sitcom?

GRANT: I love it! And I did MODERN FAMILY last year, but I haven’t been doing sitcoms. I’ve been doing movies and occasionally a drama. And I get so tickled on the set, sometimes I have to remember that I’m acting, I’ve got to stay in the scene. They make me laugh – Ike and Mindy and James Franco was hilarious, and last year, we had Seth Rogen and I saw him watching the scene and it’s just so funny to me, so I’m having a blast. That’s the truth. I love it. I love making people laugh and not always being the bad guy.

AX: When did you start your acting career?

GRANT: It took a long time for me to get my career started, and in 1986, I finally did a play at the Ahmanson [in Los Angeles], and I started out [in films] in RAIN MAN. She was a nice person. I don’t know when I started playing those bad guys. Let me think. I did THE DARK HALF, a George Romero movie. And I did CHILD’S PLAY. And I think people saw that, and then I did X-FILES and ANGEL and then actually I was a bad guy on MALCOLM IN THE MIDDLE, and they saw me for DONNIE DARKO, and I think once DONNIE DARKO, that was really it, because people love that movie so much, and everybody loves to hate Kitty Farmer. But yeah,Beverly’s a nice departure. She’s my hero. She’s a little odd, but not evil.

GRANT: A lot of stage work. I did SORDID LIVES – the play and the movie and the series – and then I did TRIALS AND TRIBULATIONS OF A TRAILER TRASH HOUSEWIFE and that’s now a movie called BLUES FOR WILLADEAN with Octavia Spencer and Dale Dickey. You can get that at iTunes, and then at the Colony, I did GRACE AND GLORY. I’ve been very lucky doing a lot of theatre.

AX: Besides the movie coming out on iTunes, do you have any other projects coming out?

GRANT: Oh, I have a big one I’m very excited about. Adapted, directed and starring James Franco, it’s based on a William Faulkner novel called AS I LAY DYING, and we premiered at Cannes [in 2013], to a standing ovation. And honey, when they stand – it lasted, like, ten minutes.

AX: Is there anything else you’d like to say about THE MINDY PROJECT right now?

GRANT: Oh, I love Mindy Kaling. She’s a genius. I hope I am being of service to her wonderful woman’s voice. It’s so exciting to have a woman’s voice be heard. I’m a feminist and I always have been, and that’s the biggest thrill of the whole thing for me, just to support her very unique voice.