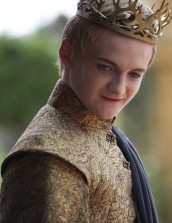 Even setting the stage here is glorious 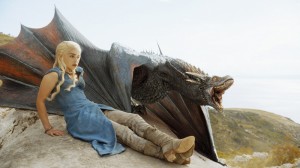 Season 4 of GAME OF THRONES opens with “Two Swords,” an episode in which Arya (Maisie Williams) and Sandor Clegane, aka the Hound (Rory McCann), see plenty of bloody action. For the rest of the characters, it’s clear we’re seeing the chessboard being set up for what’s to come, but even this is exciting and witty and engrossing.

Tyrion (Peter Dinklage) is unable to comfort his disconsolate young wife Sansa (Sophie Turner). When Sansa goes to the godswood for privacy, she is surprised by Ser Dontos (Tony Way), an alcoholic knight-turned-jester who she saved from King Joffrey (Jack Gleeson) by talking the young ruler out of killing the man. Dontos gives Sansa a necklace as a thank-you. Meanwhile, Tyrion’s mistress Shae (Sibel Kekilli) doesn’t entirely believe that Tyrion isn’t sleeping with his wife (although he really isn’t) and is generally jealous and grumpy.

Tyrion is also tasked with welcoming the Martell faction to King’s Landing in preparation for Joffrey’s wedding to Margaery Tyrell (Natalie Dormer). Prince Oberyn Martell (Pedro Pascal) still bears an understandable grudge against Tywin Lannister (Charles Dance) in particular and House Lannister in general for the deaths of Oberyn’s sister Ilia and her two children. He kills a couple of Lannister men in a brothel (granted, they threatened him).

Tywin is furious that Jaime (Nicolaj Coster-Waldau) insists on remaining in the King’s Guard rather than returning to the Lannister stronghold of Caesterly Rock and having a family there. Cersei (Lena Headey) blames Jaime for not coming home sooner, even though Jaime had been held prisoner. Lady Brienne (Gwendoline Christie) blames Jaime for not helping her get Sansa out of King’s Landing, even though Jaime points out there’s nowhere safe to take the young woman, as Sansa’s family is gone.

At Castle Black, Jon Snow (Kit Harington) has mostly recovered from being shot with arrows by his anguished erstwhile Wildling lover Ygritte (Rose Leslie). Jon delivers his truthful account of his doings beyond the Wall to the Night’s Watch council. Some members of the council want Jon executed, but Maester Aemon (Peter Vaughan) stands up for him.

Arya continues to travel with the Hound, who talks of selling her back to her aunt Lyssa. At a tavern, they spy a traveling company of soldiers. Arya recognizes Polliver (Dominic Carter) as a torturer who took her sword and killed her friend Lommy. Inside the tavern, Polliver annoys Sandor so much that the Hound engages in a one-on-five fight, though Arya pitches in, reclaims her sword and kills Polliver on her own.

Over in Essos, Daenerys’ (Emilia Clarke) dragons are getting larger and harder to control, though huge Drogon does enjoy laying his head in his “mother’s” lap. Daenerys’ army is marching on the slave-holding city ofMeereen. The city fathers of Meereen anticipate this and have attached the corpses of murdered slave children to mile markers along the route. This has the effect of making Daenerys extremely angry.

All of the King’s Landing scenes are wittily written, keeping us guessing at where everything is going, while delighting us with what we’re watching. As always, everything Dinklage does as Tyrion is fascinating, and Christie as Brienne has wonderful moments, both opposite Coster-Waldau’s Jaime and Diana Rigg’s splendid Lady Olenna Tyrell.

By now, the sight of Daenerys and the dragons almost automatically makes the heart beat faster and fonder. One glitch in the episode is that, after Daenerys has been petting Drogon, she tries to touch him while he’s feeding and he snaps at her. This is meant to indicate she’s losing control of him, but instead it will indicate to pretty much anyone who’s ever had a pet that dragons are like cats and dogs in that they don’t like being handled at suppertime.

However, the best part of the episode is Arya and Sandor. Whether it’s hearing Sandor succinctly utter a threat/promise to the over-talkative Polliver or seeing Arya master the situation, their sequences are continually bracing.

Welcome back, GAME OF THRONES. Please, play on.