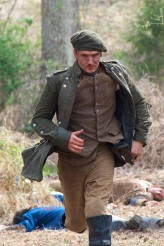 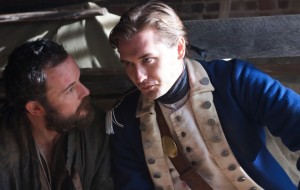 In big-picture terms, everyone knows the outcome when the British colonies in North America rose up against England in the 1770s. However, relatively few people know about the Culper spy ring, which was instrumental in the eventual victory of the Continental Army.

AMC’s new series TURN, Sundays at 10 PM, is based on the nonfiction book WASHINGTON’S SPIES: THE STORY OF AMERICA’S FIRST SPY RING by Alexander Rose. Set in 1778, as the Revolutionary War continues to rage (the Declaration of Independence wasn’t the end of hostilities), the series, follows initially reluctant Culper Ring recruit Abraham Woodhull (Jamie Bell).

Seth Numrich plays Abraham’s recruiter, the confident and resolute Benjamin Tallmadge. Numrich (pronounced Noom-rick) previously starred in the half-hour series GRAVITY (not to be confused with the film of the same name) and appeared in the features HOW TO KILL A MOCKINGBIRD and PRIVATE ROMEO, as well as numerous Broadway and off-Broadway stage productions. At the Television Critics Association press tour, he sits down for some private conversation about his work in TURN.

AX: Before you were cast in TURN, how aware were you, if at all, of the details of this portion of American history?

SETH NUMRICH: Not very, to be totally honest. I think that, like many people growing up inAmerica, you have a vague idea of the Revolutionary War and a sense of us against them and David and Goliath, and you get a basic idea of the big battles and then the outcome. You know about Paul Revere and that sort of thing. Beyond that, I’ll admit I was pretty ignorant to most of the details, but learning about this stuff and reading Alexander Rose’s book and reading the scripts and reading all this information about the time period, particularly about the spy ring, it’s been extremely fascinating, just really interesting to learn. And then the excitement for me as an actor, getting to tell a story that isn’t very well-known and getting to tell about these people who nobody really knows about, the heroic acts that they did. It’s really cool.

AX: You play Benjamin Tallmadge, who was a real person. How much research were you able to do on him?

NUMRICH: Well, it’s interesting. Benjamin Tallmadge was a real soldier. He was a captain and then a major in the Continental Army. There is quite a bit of information about him in history, and when I was first looking up things and researching, I found a memoir that he wrote, an autobiography of his life. I thought, “Oh, this is perfect, this will tell me everything I need to know.” I got to the end of it and realized that there was nothing in the whole book about spying or about spy efforts. And even though he wrote it well after the war was finished, and he was a much older man, all of that information was still classified and nobody knew about it. No one ever knew how much of a hero he was and how much he risked and how much he gained for the cause, and so while there’s a lot known about him, there’s also a lot of his secret double life that was never known while he was alive, and well into the twentieth century, a lot of that information was still undiscovered. So it’s a collection of being able to learn certain things through the common means, and then there are other things that Alexander Rose and that these other historians have really only uncovered recently, that I was able to learn about through their books and more specifics about the efforts that he made, and it’s all really fascinating and really cool.

AX: Jamie Bell, who is British, is playing Abraham Woodhull with kind of an American accent, and you’re American, playing Tallmadge with an English accent …

NUMRICH: Sort of, yeah. The idea is that an American at that time was really at most two or three generations removed from England or from other places that they may have come from. Most of the early settlers would have come from western England or from Ireland, places like that. So, on the show, what I’m trying to do accent-wise is a mixture of my own American accent and a West Country British accent, so it meets somewhere in the middle. So it might sound sort of strange, but the reality is, nobody knows what people would have sounded like at the time, so we tried to gather as much information as we could of what they might have sounded like and make an educated guess from there. And so Jamie has a similar accent, although his sometimes is a little bit more Irish-influenced, and then Heather [Lind, who plays Anna Strong] and Dan Henshall, who plays Caleb Brewster, who was one of the other members of the Culper Ring and was the person who ferried information back and forth – [the characters] all grew up together – our accents are all roughly the same but slightly different, and I think that would have represented the reality of America at the time. It would have been a real melting pot of those different cultures and different places.

AX: You have to dominate Jamie Bell in a lot of your scenes together, where Benjamin is twisting Abraham’s arm a bit. Is that fun, is that difficult …?

NUMRICH: It’s fun. It’s intimidating, because Jamie’s such a good actor that showing up to do scenes with him, I’m excited, because I get to work with someone who’s so great and I get to learn from what he’s doing. We get to really rise to challenge each other and to meet each other as actors and figure out what the scene needs to be and how to move forward. We had one great scene in the pilot where there are lots of levels going on of who’s deceiving who and who’s lying and who’s telling the truth, a kind of parsing out of the finer details of that situation, and I just had a great time getting to work with him and bounce ideas off of him and he’s such a fine young man and an extraordinary actor, and I feel lucky to get to work with him on that level.

AX: Does Benjamin actually do any spying, or is he just in charge of the other spies?

NUMRICH: For the most part, his role is the ringleader. He was responsible for setting up the Culper Ring. In terms of whether he was a spy, he participated in the spying activities. He was the one who was actually writing the codes, so he would write a code and then send a codebook to his operatives and then all the letters that were sent back and forth all would have to refer to that code. But then they would have to change the codebooks every few months, in case anyone had caught onto them. So he was in that way a master spy, because he was responsible for those types of activities, but he was mainly in charge of the operatives in the field of Abraham Woodhull and these other people who were actually gathering the intelligence, and then the other large part of his role was using the intelligence in military campaigns and creating missions and executing them based on whatever information had been gathered.

NUMRICH: Yeah. It is. It gets complicated, definitely [laughs], and as actors, we only really get the scripts a week or two before we start shooting a particular episode, so sometimes things will show up and I’ll learn something about my character that I didn’t realize or hadn’t known before, and it changes a particular way of thinking about the scenes or the character in general. So sometimes that’s shocking – at the same time, it’s very exciting, because in reality, these characters were all figuring things out as they went along. They didn’t know necessarily what the endgame was. They were trying to gather intelligence, trying to be effective, but they didn’t know how it was going to turn out and they didn’t know what turns and twists were going to come along that path. As an actor, you want to know where you end up, and for me, I come from the theatre, so I’m used to working on a play, where you know months in advance, or sometimes in terms of Shakespeare and that sort of thing, everybody knows what the character goes through. But this is very different, and so it’s an adjustment for me. But I find it exciting, because you kind of get to be in the same place as the character in terms of not knowing what’s going to happen and finding out as we go along.

AX: With Shakespeare, everybody’s there to watch how you do it. With a story that’s totally new to most people, do you think the characters might come in second to the storytelling?

NUMRICH: You know, the great thing about this show is that I honestly feel that it’s both. It starts with the creative team [headed by writer Craig Silverstein and executive producer Barry Josephson]. They’re turning out these scripts that are so well-written and so intriguing and there’s so much great stuff happening in the plot, and that could be enough. Like I think some creative teams would think, “Well, that’s enough.” And I think that these people are interested in not only having those exciting storylines, but having really fully-realized characters as well. So they’re interested in having these real people and in encouraging us to discover the elements of who these people are and what their relationships are to each other. So I feel lucky in terms of working for AMC and working for these people who really like exploring both sides of it.

AX: Do you enjoy the open-ended style of storytelling, or do you like it where you know what the whole thing is when you start out?

NUMRICH: Well, interestingly, this is almost both as well, in that we all know what happens. We all know that eventually America becomes its own country, and what’s great about doing the show is, we’re uncovering how all of that happened. And I think people might tune into the show thinking, “Oh, I know how all of this ends, because everybody does, it’s written in the history books,” but I think what’s interesting is, I don’t think everybody knows the specifics of how, and everything that went into those efforts. And getting a glimpse into these people’s lives and what they did is really the real meat of the show and what I think will make it exciting for people to keep tuning into.

AX: You had done GRAVITY prior to TURN. Can you contrast the styles of working on the two series?

NUMRICH: Yeah. You kind of couldn’t get more different from that one to this one. [GRAVITY] was a contemporary show, it was a half-hour comedy, it was my first time ever acting on camera, and I was pretty young and pretty fresh out of drama school. So that was a brand new experience for me and very exciting. This is for me even more exciting, because it’s something that, as an actor, there’s so much here to sink your teeth into. These people and the story are just so fascinating and so rich that I’m really enjoying it.

AX: Is there anything else you’d like to say about TURN right now?

NUMRICH: I feel really lucky to be working with such great actors. I feel like this is a big, new opportunity for me to be working on TV in this way, and I couldn’t have asked for a better cast to get to work with and then to get to watch and learn from what they’re doing. I feel really blessed in that respect, and in every respect.