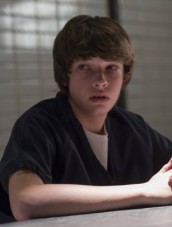 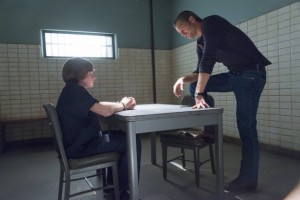 It has been announced that JUSTIFIED will end its run with next year’s sixth season. Without being too spoilery, it can be said that the end of Season 5 indicates what the endgame will be.

JUSTIFIED executive producer Graham Yost, who adapted the series for television and serves as show runner – he’s also one of the executive producers on FX’s THE AMERICANS, now in its second season Wednesdays at 10 PM – did a conference call to talk about his show. This interview is a combination of what he said during the call and a conversation that took place at a party Fox and FX threw for the Television Critics Association.

On why the decision was made to end JUSTIFIED after next season:

GRAHAM YOST: I think we’re all just incredibly happy to be thought of in the company of other great shows that are on right now, and I think that’s one of the reasons why we want to end it after six seasons is, we want to make sure we don’t overstay our welcome. We don’t want to run out of story. We don’t want to be treading water. We’ve already done a few things that, to our minds, are dangerously close to repeating ourselves. And sometimes we’ve repeated ourselves without knowing it. It’s like, “Wow, in retrospect, that seems an awful lot like the one in Season 2 or 3 or whatever. So that’s the big thing – we want to leave the party on a high note.

On whether Seasons 5 and 6 are structured as one huge season together:

That’s exactly what we did. Leonard Chang, one of the writers, called it pretty early last July when we were talking about Season 5. We found that we couldn’t help also talking about Season 6, and we knew by that point that that would be our final season. And we started discussing, well, how do we want this whole thing to end? Where do we want to go? And Leonard said, “Maybe we should just be thinking about this one big season that’s divided in two parts.” The Crowe story reaches a conclusion, but the story of Rayland, of Boyd and of Ava and the office, particularly Rachel [Raylan’s fellow deputy, played by Erica Tazel] and David Vasquez, our U.S. Attorney [played by Rick Gomez], and that would involve Tim Gutterson [another deputy, played by Jacob Pitts] as well, everything is pointed in a certain direction for next year and that was our goal from pretty early on. We imagine that the sixth season will take place over a fairly short period of time, certainly a few weeks, maybe a couple of months.

It’s really our goal to make it more serialized than we have in the past and to make it more one big story. The marching orders I got at the beginning of this series from John Landgraf at FX was that you can do standalone episodes in the first half of the season and start really focusing on the serialized aspect. We’ve done fewer and fewer standalone episodes as the series has progressed because, in general, we have the audience that we’re going to have and they’re very loyal and they know the stories. And so there was a certain frustration with some of the long-term fans with any standalone stuff we did this season. We’ve heard that, but we were already intending to go more serialized in the final season anyway, because that’s what we really have to serve – the stories of Raylan, Boyd, Ava and the Marshals.

On why Seasons 3 and 4 had somewhat less arced storylines:

Part of it was, I’d run into people and they’d say, “Okay, so who’s your big bad guy this season?” And just the way they said that, in that tired, “Oh, we know what to expect,” so we thought, “Okay, we’re not going to do that this year.” So it was a conscious attempt to mix it up.

On how Season 4 used the real-life Bluegrass Conspiracy as the basis for the fictional tale of Drew Thompson, played by Jim Beaver:

I believe the [real] guy’s name was Drew Thornton. He’s the one who came out of the airplane and went splat. I heard it was in a driveway and then I read it was actually in someone’s backyard, but anyway, he had been a cop in Lexington, a lawyer in Lexington, and got in with bad drug people and became this drug importer. They found him with a hundred pounds of cocaine on him. And the question was, he either overloaded the chute, or he packed the chute wrong, or perhaps someone else packed it for him. It’s all conjecture, but he might have felt that he was being followed by the DEA planes and that’s why he jumped. If you read about it, it went all across the country. It was a huge story. We basically had plucked out one thing. And in our world, it’s Drew Thompson rather than Drew Thornton, and our story goes in a completely different direction.

On whether Raylan is becoming more hardcore as Season 5 progresses:

Winona [Raylan’s ex-wife, played by Natalie Zea] called him in the pilot the angriest man she’s ever known, and I think that is part of it. But it’s also Raylan’s struggle, because he wants to get Daryl, but he can’t just kill him, because then that would doom Kendal to a long stretch in prison. But it’s also, I think, something that happened in the eleventh episode, when after Art was shot and Raylan is talking to Tim Gutterson, and Tim is basically saying, “Do you want to do out and just find Daryl and kill him?” And Raylan says, “I don’t think that’s what Art would want.”

And so Raylan has the struggle in him of the guy who wants to get revenge and yet can’t because of the kind, but he also wants to try and do things in a way that Art would respect. We’ve always seen Art as his good father, and he’s obviously incredibly disappointed Art this season in a way that he never has before, so that’s the struggle. And you see what he does in those scenes with Ava, and I think it tears him apart. I don’t think he wants to be the guy who says, “I’ll get the guards to look the other way,” but he’s desperate. And I think that it’s [less] him being hardcore Raylan as being desperate Raylan.

On how the characters are coming together or apart in Season 5:

One of the points of the “Starvation” episode [which aired April 1] was that when Boyd publicly confronts Raylan with the [truthful] accusation that he, Raylan, was implicated or involved in the death of Nicky Augustine, he says it in front of Rachel and Tim. Rachel and Tim have Raylan’s back. And that is sort of the beginning of them coming together and I will say that is one thing we’re headed towards in the final season. Rachel and Tim backing him up was Raylan’s victory in that episode.

On whether and how much the character Art will be part of Season 6:

We’ll see Art. I’ve tried not to be coy at all right from the beginning, since Art was shot in the eleventh episode of the season. We’re not playing that for suspense. Art lives and he will be a part of things. I will say that one of the themes of the final season – “theme” might not exactly be the right term for this, but the notion of “One more thing before I go.” And that is certainly the case for Raylan. It’ll also be the case for Boyd and we also think it’ll be the case for Art. In talking to our technical advisor, former Chief Deputy [Marshal] inL.A., Charlie Almanza, he said that it’s not uncommon for a Chief Deputy, before he retires, to say, “There’s one more case I want to handle, one more guy I want to get.” And that will be part of Art’s story.

On the history of the song that plays over the closing credits of each JUSTIFIED season finale, except Season 3:

At the end of the first season, we used Brad Paisley. And then we thought of [using] a different version at the end of the second season, but we went with Brad again, just a shorter version. We didn’t use the song in the third season. And then last year we had Dave Alvin record it. Dave is a friend of the show – he actually performed in the third season. And then we always thought if, and this is giving a little bit of a spoiler to anyone who hasn’t seen the last episode, but I think everyone knows we’re headed with something with Ava, and I thought that if we ever ended a season where Ava’s predicament was at the forefront, it would be good to have a female version. And we listened to a bunch, and Ruby Friedman’s version, with its percussiveness and the opening of it, its a cappella stuff seemed absolutely right and we actually wrote that scene and designed that scene to use her version.

On Yost working on both JUSTIFIED and THE AMERICANS:

On Margo Martindale, who won an Emmy for playing Mags Bennet on JUSTIFIED, being cast on THE AMERICANS as KGB agent Claudia, aka Granny:

When the idea of Margo playing the character of Granny first came up, [FX president John] Landgraf and I were really excited. Joel and Joe were concerned, because they were afraid she was so identified with being Mags Bennett. And we said, “No, that’s part of the FX fun.” Tim’s been on THE LEAGUE, he’s done ARCHER, of course he was in DAMAGES. Walton had a memorable turn on SONS OF ANARCHY [as a transgendered character] that we had not heard about until people started Tweeting photographs, and then Dave Andron, one of the writers, got the art department to blow [a photo] up and make it into one of those stand-up things, just to sit in the chair. So wherever Walton’s chair went for a few weeks, there was Walton in full transgender glory from SONS. So I look at it as that FX repertory company.

On whether regular JUSTIFIED characters will live or die:

Listen, we have a very freewheeling [writers’] room, so we talk about stuff all the time. And yeah, that’ll come up. “Should we kill off Rachel or Tim? Boy, that would really set Raylan on fire.” But it just never felt like it was our show. Certainly people die in the show and I think there’s been great heartache and sadness along the way. But I think that level or heartache is almost outside of our story, or outside of Elmore. Now, that said, we’re heading into the last season. And we still don’t know who is going to live and who is going to die. We don’t know who, if anyone, will leave Harlan alive. And so everything is on the table. And if we can find a way to make it work, or if it gives us something, if it is a really wonderful character story, then anything can happen to anyone in the final season.

On JUSTIFIED’s longevity and whether Yost expected it to last six seasons:

No, I didn’t. I mean, I hoped it would. I thought that it could have the legs, that there were stories and places to go. I didn’t expect it. I’ve learned not to expect anything in this crazy, mixed-up world. I think our concern right off the top was that we were not an antihero show. [Raylan] is a flawed hero, and FX had made its bones with RESCUE ME and THE SHIELD and NIP/TUCK – very much antihero shows. So I felt right there with that, alone, was a decision to try and expand FX’s brand a little bit. This guy’s a hero.