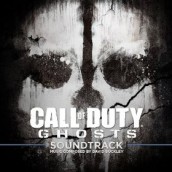 David Buckley salutes the franchise with an epic shooter score

Gaining some major percussive action chops under Harry Gregson-Williams’ command with THE NUMBER 23, GONE BABY GONE and THE TOWN, David Buckley has emerged in his own, rhythmically exciting right by layering down alternately suspenseful and exciting groove scores as FROM PARIS WITH LOVE, GONE and PARKER. But it’s the video game arena that’s now given Buckley his most expansive, and explosive opportunity with CALL OF DUTY: GHOSTS.

With the guts and glory franchise taken to its apocalyptic, sci-fi extremes for a Latin American attack that essentially wipes out North America, Buckley brings on guts and glory Armageddon that benefits greatly from its orchestral back up. From battling in the ruins of San Diego to raiding an ocean oil platform and blasting space station villains in the coolest outer-atmosphere fight this side of MOONRAKER, Buckley’s samples are the machine gun fire on top of the string emotion, which gives the biblical scope of GHOSTS real emotional firepower, adding to the sweat of every mission’s countdown, as well as the father-sons bond that drives it. Buckley also comes up with eerie samples that give his squad of mystery warriors a fearsomeness that matches their supernatural killer rep. His GHOSTS have a ruthlessly cold, yet valorous tone that matches the patriotic strength of CALL OF DUTY‘s past musical soldiers, a squad that Buckley joins with impressive, first-person symphonic presence here.

Click on the link to Purchase the CALL OF DUTY: GHOSTS soundtrack