bones review the carrot in the kudzu 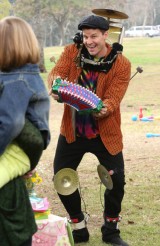 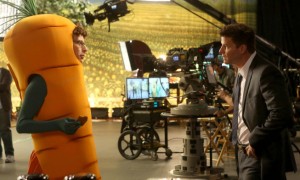 BONES shows its playful side with “The Carrot in the Kudzu,” which has very mild horror effects – the kudzu keeps going through growth spurts in the lab, unnerving everyone – along with kiddie costume comedy, Christine’s birthday party and reaction to Dr. Clark Edison’s (Eugene Byrd) first novel.

The case involves a body dumped in roadside kudzu. The deceased turns out to be the creator of a local children’s educational TV series, THE VEGETA-BILLS, which wraps lessons in nutrition in rap songs, performed by men costumed as vegetables who are all named Bill (the veggies, not the actors). Due to a combination of Tweets and cosmetic particles found with the remains, Booth (David Boreanaz) and Brennan (Emily Deschanel) are able to deduce that the killer is a woman who was able to lose eighty pounds, thanks to being inspired by THE VEGETA-BILLS. Alas, she developed a crush on the “carrot” and didn’t realize the creator/actor had a heart condition that he refused to medicate (the beta blockers interfered with his sex life). When she honked her horn at him, he collapsed; she disposed of the body for fear of being thought guilty – which she was.

Meanwhile, Booth and Brennan are sparring over their little daughter Christine’s birthday party. Brennan never had a birthday party as a child – her parents were hiding from the authorities and didn’t want to draw attention. Brennan still resents the fact that her father Max (Ryan O’Neal) was fleeing from the law, and Max still insists that there are reasons he can’t tell Brennan everything. He does remember how much she enjoyed playing tag as a child, which sparks Brennan’s memory. Christine wants to play tag at her birthday. Booth is an easy target, as he’s had to put on a one-man-band gear when the original performer gets drunk and passes out.

Finally,Clark happily reveals to his coworkers that he’s finished a mystery novel. Brennan congratulates him on finishing it, but Clark doesn’t try to get her to read it. He does, however, press copies on Angela (Michaela Conlin), Hodgins (TJ Thyne) and Cam(Tamara Taylor). All of them are horrified by the awfulness of Clark’s prose and gear up to be honest with him – but are spared the necessity when Clark announces he’s being published by the same company that puts out Brennan’s books. Now that it doesn’t need to be explained to Clark why the book is unpublishable – because it isn’t! – his friends feel safe in lying about how much they loved it.

It’s great when all of the diverse pieces work within a BONES episode, which is the case here. The writhing kudzu is a consistently effective gag; anyone would jump with that going on in the vicinity. The specifics of the kids’ show, with the aggressive nutrition messages (pirate cookies that get scurvy and die) and the phallic costumes, are pretty funny and the detection is clever and has rhythm – because “The Carrot in the Kudzu” spends enough time with its subplots, the lab material doesn’t need to be stretched out, with the result that we get the sense of how things go when everyone is on their game and nothing is too baffling.

The birthday party starts to turn into another one of those Booth-is-right/Brennan-is-wrong scenarios, but the tag twist is buoyant and the sight of Boreanaz gamely oompah-ing in the one-man-band get-up merits a few chuckles.

Finally, there is Clark’s novel and the social panic that surrounds it. The selections read aloud by his appalled friends are entertaining, but the best part is when Angela casually mentions she keeps wine in her office. When Cam reacts, Angela responds that, given what they all have to deal with at work, she’s surprised everyone else doesn’t keep alcohol on hand as well.

“The Carrot in the Kudzu” is an enjoyable episode that plays to everyone’s strengths.