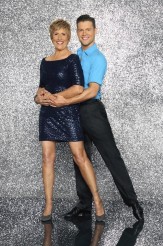 DANCING WITH THE STARS Season 18 Recap: Double Elimination! Diana Nyad and Sean Avery are out 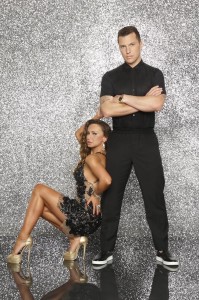 The producers of DANCING WITH THE STARS are doing everything they can to mix things up this season, some good and some bad. Tonight they eliminated one couple in the middle of the show before they even danced – Diana Nyad & Henry Byalikov – and then allowed them to dance afterward. The twist was that there was another couple eliminated at the show’s end – Mr. Smiley face himself – Sean Avery & his unfortunate partner Karina Smirnoff. It’s no wonder he was ousted from the show – he always looked like he was about to kick someone’s ass, refusing to smile. Still, Billy Dee Williams & Emma Slater managed to extend their stay on the dance floor after dismal scores last week – 15. But, will they be able to hold on next week with the same disappointing scores? The STAR WARS fans are the only ones who can save them now. The top spot was owned by three couples this week who earned 25 points – Meryl David & Maks Chmerkovskiy, James Maslow & Peta Murgatroyd, and Charlie White & Sharna Burgess.

Cody Simpson (singer/actor) and his partner Witney Carson
Not his dance. Inaba said it all came together in his Tango. Goodman thought it could be a little more tight. Tonioli said it was compelling.
Scores: Inaba –7, Goodman – 7, Tonioli – 8,  Harland – 7

Charlie White (Olympian) and his partner Sharna Burgess
He is a good leader leader. Inaba called his Tango fabulous. Goodman told him he broke hold when he shouldn’t have. Tonioli said he loved it.
Scores: Inaba – 9, Goodman – 7, Tonioli – 9, Harland – 9

Drew Carey (actor/TV host) and his partner Cheryl Burke
He has very little hip action. Inaba said he could have had a higher score in his Jive. Goodman said it was fun to watch. Tonioli said he is a consummate stage animal.
Scores: Inaba – 7, Goodman – 7, Tonioli – 7, Harland – 7

Amy Purdy (Olympian) and her partner Derek Hough
She goofed up but still impressed. Goodman said she used every music nuance in her Swing dance. Inaba thought they were very synchronized. Tonioli said she was a knock out.
Scores: Inaba – 8, Goodman – 8, Tonioli – 8, Harland – 8

Danica McKellar (actress) and her partner Valentin Chmerkovskiy
Very good! Inaba said she dominated her Samba. Goodman told her to straighten her legs. Tonioli said she was beautiful to look at.
Scores: Inaba – 8, Goodman – 8, Tonioli – 8, Harland – 8

Who Went Home: Diana Nyad & Henry Byalikov and Sean Avery & Karina Smirnoff
Who Has Legs To Take Home The Mirror Ball: It’s the Olympians (Meryl and Charlie vs. the TV stars (Danica and Candace)