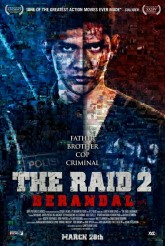 As with the first RAID, action, action and did we mention the action?

2012’s THE RAID: REDEMPTION has some of the most astonishing martial arts sequences to be seen in a film distributed in the United States. Now its sequel, THE RAID 2: BERANDAL, is here. Like its predecessor, THE RAID 2 is written and directed by Gareth Evans and stars the gifted Iko Uwais as dedicated kickass Jakarta cop Rama.

In the first film, Rama fought his way up and down an apartment building inhabited primarily by minions of a drug lord. Now Rama is tasked with bringing down the drug lord’s masters – not just the cartel kingpins, but the high-ups in the police department who make it possible for crime to flourish. Rama must go undercover in prison to befriend a top-level mobster’s son (Arifin Putra), then continue the charade by infiltrating the organization. Eventually, there are at least three different gangs and a cadre of crooked cops all at each other’s throats, with Rama in the middle.

In THE RAID 2, filmmaker Evans opens up his playing field, so that besides the plentiful flying fists, feet, elbows and assorted other body parts involved in martial combat, we now get a jaw-dropping car chase/battle sequence, a prison yard riot of epic proportions and a character called Hammer Girl (Julie Estelle). If there isn’t anything quite as singularly remarkable as the three-character fight from THE RAID: REDEMPTION, there is still sequence after sequence after sequence to shock and awe us.

THE RAID 2 does get off to something of a slow start, to the point where we get a little impatient as Rama’s mission is laid out for him. Once he’s in the prison, things get livelier, and the last third of the film feels like a runaway train. We’ve seen versions of this plot before, but never with this kind of pedal to the metal ferocity. Between the martial arts, guns, vehicles and improvised weaponry, this is the sort of movie that either makes you laugh with delight at its nonstop inventiveness in the name of ass-kicking, or else it’s not your thing at all.

The differences between Evans’ movies and other action films in this genre start with the skill of Uwais, who appears to move at just under light speed. Uwais also gives a sympathetic performance – his Rama isn’t stoic, but rather dismayed and grieved by the growing crisis around him. The film has a horror movie-worthy gore quotient, which is appropriate given its level of violence.

Yayan Ruhian is surprisingly likable as a gang member who is almost as fight-capable as Rama and likewise devoted to his family. Putra exudes righteous arrogance as the crime lord’s son and heir and Estelle impresses with her own physical style.

THE RAID 2 doesn’t have an especially original storyline, but this is a rare instance where the plot twists don’t matter all that much. If you are a bloody action fan who relishes escalation and physical mastery, this is movie nirvana.