Home » into the west soundtrack review 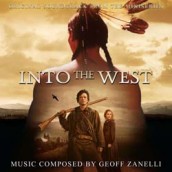 CD Review: INTO THE WEST soundtrack

Taking the idea of a family’s American expansion with all the Cinemascope passion afforded to HOW THE WEST WAS WON (but shrinking the screen just a bit for TNT), executive producer Steven Spielberg’s 2005 Emmy-lauded miniseries INTO THE WEST took home a music award for composer Geoff Zanelli. Yet in a slap to the creative face that would make an Indian shed a tear, the only album to get a release was one of those “inspired by” song jobs. Now, justice has finally come to the frontier with La La Land’s two-CD release of Zanelli’s beautifully evocative score.

What makes his epic work all the more impressive is just how un-“western” it mostly is. So don’t expect any Morricone-isms, soaring Moross-ian Big Country music or rousing Bernstein heroics here. For in linking the vision quests of Anglo and Lakota clans, Zanelli goes for a melodic orchestral wash, his music revealing a new frontier at once filled with optimism, and the sad realization of land’s end. There’s a real poetry to Zanelli’s richly dramatic score, where bold orchestrations for the relentless push forward of wagons, cavalry and train meets the solemn nobility of a people who aren’t about to back down, as represented by impressive use of ethnic flutes, voice and drums. Meanwhile, the more modernistic, and subtle use of electronic percussion never allows the score to sound antiquated. It’s a measure of how politically advanced the western has come that by settlement’s end we don’t get the rousing exhilaration of a trek well done for all the sacrifices it entailed, but a moving sense of tragic pride in how an entire race was sacrificed for the dream of manifest destiny. It’s a lushly moving, and original solemnity that’s the true feather in Zanelli’s headdress, whose majestic unveiling has been a long time coming.

Clink on the link to Purchase the INTO THE WEST soundtrack