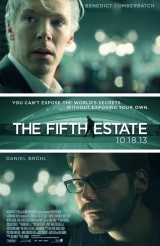 Whenever there’s a film where the action is largely propelled by what’s happening via computers, the fear is that we’re mostly going to be watching people typing. This is nonsense, of course – with results ranging from THE SOCIAL NETWORK at the high end to HACKERS at the low and TRON in the off-to-one-side sci-fi category, there’s nothing mandating that Internet-based stories be one thing or another.

THE FIFTH ESTATE has a certain dryness. Maybe it’s because director Bill Condon and screenwriter Josh Singer, working from two credited books on the subject and no doubt piles of other research besides, were inundated by so much material that it became hard to narrow things down to a single focus. Maybe it’s because their central figure, Julian Assange (played here by Benedict Cumberbatch), is a bit inscrutable when it comes to his human side and that the more accessible Daniel Domscheit-Berg (Daniel Bruhl) seems to be both more swept along by events than shaping them and able enough to turn to his romantic partner Anke Domscheit (Alicia Vikander) that we don’t feel a rift with Assange will create an emotional void in his life. Maybe it’s because all of the central players are physically removed from most of the consequences of their actions, which play out dramatically with people who never have any contact with the WikiLeaks founders. Maybe it’s all of the above.

In 2007, German Daniel and Australian Julian meet up, with Daniel intervening at a convention so that Julian can make a presentation. The talk is poorly attended, but Daniel is fascinated by Julian’s vision for a website where people can safely and anonymously post about major political doings around the world. Daniel rallies some fellow computer tech friends and WikiLeaks is born. However, when the site’s policy of no editing whatever leads to the publishing of names and addresses, which in turn leads to assassinations, Daniel gets cold feet, which infuriates Julian. Meanwhile, the mainstream press is going crazy in trying to cover both the WikiLeaks revelations and WikiLeaks itself, while theU.S.government tries to shield suddenly endangered assets.

The scope of THE FIFTH ESTATE’s ambitions is admirable, but because the groups are so separate from one another, while we recognize intellectually that they’re all part of the same story, it doesn’t feel that way. When Laura Linney’sU.S. government agent tries to safely extricate aMiddle East ally, Dr. Tarek Haliseh (Alexander Siddig), who has been identified in the leaks, Julian isn’t affected at all, and Daniel’s concerns about who may be harmed are so broad as to render Haliseh an abstraction.

The pieces of THE FIFTH ESTATE are mostly interesting, as we see how something like WikiLeaks could exist in the first place and its diverse impacts all over the globe, but the snapshots provided don’t explain things. For instance, when an African man is shot dead in his car, the implication is that this happened because of information on WikiLeaks, but the film expects us to fill in our own blanks (if WikiLeaks hadn’t reported the name, would the victim have been otherwise safe?).

The film is beautifully cast, with Cumberbatch playing Julian Assange as a mercurial, somewhat puckish figure, capable of both brilliance and horrible petulance. Bruhl is highly sympathetic as the responsible, enthusiastic Daniel and Vikander puts spirit into her rather conventionally written role as the voice of reason in their relationship. Linney and Stanley Tucci are both convincing as the disgruntled spy handlers and Peter Capaldi and David Thewlis as British newsmen are so perfect that a TV spinoff with their characters, based on just a few scenes, would be welcome.

THE FIFTH ESTATE only gets into Assange’s legal troubles in a footnote at the end, which is fair enough, given that the movie is about WikiLeaks and not about whether or not he’s sexually abusive. However, the film’s view of him as a sort of external force leaves a void where something solid should be. We understand and even sympathize with Daniel’s crisis of conscience, but it is not enough to sustain the whole enterprise, and it would likely have been better to dramatize more of WikiLeaks’ effects on the world and discuss them a bit less.

There is a very amusing scene at the end of THE FIFTH ESTATE that taps at the fourth wall, with Cumberbatch’s Assange commenting on the film we’ve just watched. It’s unexpected and makes us instantly reflect on what we’ve just been told. It’s a great moment, even though the context is uneven.