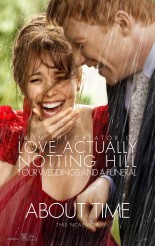 Touching father/son relationship and pleasant romance, with a dash of fantasy

There are moments – long stretches, even – when ABOUT TIME seems as though it’s perhaps too pleasant for its own good. It’s always agreeable and amusing – except when for its effective moments of melancholy and there are the trials and travails of dealing with life and love and time travel, but mostly, it’s a movie that urges us to live as though every day is worth experiencing twice, which is a tall order for those not dwelling within the charmed sphere of the characters here.

When Tim (Domhnall Gleeson) turns twenty-one, his Dad (Bill Nighy) tells him a peculiar secret – all of the men in their family can travel through time. It’s a limited power, as they can only travel backward, within their own lifetimes, and only to places they’ve already been. They can change minor details, which never seem to affect history, so there’s no need to worry about this.

Once Tim tests the information and finds it to be true, he naturally asks what one is supposed to do with the gift. Dad advises against using it for money and for Tim to instead figure out what he really wants in life. Tim wants a girlfriend more than anything. He finds one in the person of American-in-London book editor Mary (Rachel McAdams), then uses his ability to find her and woo her.

There are a few rules involved with the time travel, but the film’s tone is very gentle – we’re not in the realm of THE BUTTERFLY EFFECT, nor even THE TIME TRAVELER’S WIFE (which, in addition to having a plot device similar to the one in ABOUT TIME, also starred McAdams as a woman married to, well, you know).

Director/writer Richard Curtis has a lot of wit and warmth, especially when he’s dealing with the father/son bond, which is where ABOUT TIME is at its richest. Nighy is so wonderful – urbane, reflective, kind, brave – that we wish he were in even more of the film than he is. Gleeson is charming and full of feeling, and we enjoy spending time with him as well. Tom Hollander scores some laughs as a grumpy playwright.

The women, however, are underwritten. We know that Mary likes Tim, likes sex and loves motherhood. That’s about it. The romantic banter between Tim and Mary is appealing and it’s a relief that neither plays hard to get, but it would have been nice to have it be more of a match of scripted structural equals. Tim’s beloved sister Kit Kat (Lydia Wilson) is primarily defined by her bad taste in boyfriends. When Tim decides to boost Kit Kat’s self-esteem, it’s by steering her toward a better sort of boyfriend, not – for example – helping her find innate self-worth. This is particularly strange, because Tim adores his sister for herself (even though we’re not really shown what makes her so lovable)

ABOUT TIME is sweet, wistful and diverting, but a bit insubstantial when it comes to romance. it’s most satisfying when it focuses on the love between parent and child. If this is your sort of love story, it’s a good one.