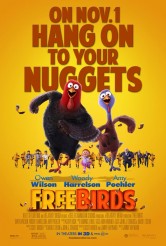 Not a complete turkey, but doesn’t really fly either

On the surface, FREE BIRDS is one more animated feature about talking animals putting aside their differences to save themselves and each other – yes, at this point, it constitutes an entire genre. However, it’s hard to tell if the makers of FREE BIRDS are intentionally putting out messages here, or if the whole thing is meant as a big goof. If the movie were half as funny as it is brow-furrowingly peculiar, it could have been a masterpiece.

Scrawny free-range turkey Reggie (voiced by Owen Wilson) is the only member of his flock who understands that humans eat birds. He has no luck spreading the word; it just makes him very unpopular. However, Reggie’s life changes dramatically when he becomes the annual recipient of the U.S. President’s Thanksgiving pardon. Reggie becomes a house pet for the President’s daughter and begins to stop worrying and love the balm – until one night he is kidnapped by a much larger turkey, Jake (voiced by Woody Harrelson), who declares that they are on a mission to go back in time to prevent turkeys from being eaten at the first Thanksgiving, thereby changing the destiny of their species.

Before one’s head explodes from where all of this may be going, it should be noted that FREE BIRDS has the same respect for history as did Quentin Tarantino’s INGLOURIOUS BASTERDS, minus the blood and swearing, of course. Nobody ever brings up the matter of a time paradox. Reggie and Jake, thanks to a time-traveling device known as S.T.E.V.E. (voiced by George Takei), land in 1621 North America, a few days before what will be the first Thanksgiving. They promptly encounter a tribe of free turkeys, who would rather flee the Pilgrims than fight them – until a few calamities change their minds.

Why do the leaders of the Native American-like turkeys have blue eyes? Why is Jenny (voiced by Amy Poehler), Reggie’s spunky love interest, wearing a sort of dress while everybody else is just feathered? Why is Miles Standish (voiced by Colm Meaney) so obsessed with turkeys? What the heck is the governor (voiced by Dan Fogler) of the human colony eating for him to be so heavy while everyone else is starving? Why does no one notice that these turkeys have prehensile feathers? Do not look for answers to these and a number of other questions that arise while watching FREE BIRDS.

The casting of Wilson, with his mellow drawl, actually works very well for the neurotic Reggie, preventing the character from sliding too far in either direction. Harrelson gives Jake growly conviction, Poehler does the requisite feisty cartoon love interest thing effectively and Keith David gives the Chief Turkey gravity. Colm Meaney is suitably scary and driven as Standish and director Jimmy Hayward provides the voices for a lot of the supporting characters.

There are some actually on-purpose funny moments here – the opening informational crawl, read aloud by Takei, is grand – but a lot of the film consists of the sort of rote material about team-building and outcasts becoming popular that is interchangeable with what’s found in other similar stories, and for every joke that works, there are several that are just filler. There seems to be a stab at making an analogy between the turkeys and human Native Americans, but it is tenuous at best, and this may be just as well.

The animation here is okay – the baby turkeys and a view of Earth from space are high points – though seldom has so little been done with 3D.

FREE BIRDS is a very mild diversion. It is trying very hard not to say anything real one way or another, but it’s not amusing enough to distract us from the script, and the script is trying so hard to be noncommittal that it can’t fall back on substance either. Everything else aside, it suffers the same issue that FLUSHED AWAY had, which is that even little kids will instinctively understand that our lead character has it better as part of a society with members of his own species than as a pet, and get impatient before the character figures this out.