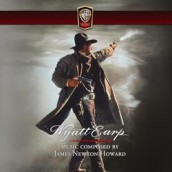 Sure, 1993’s TOMBSTONE may have smoked 1994’s WYATT EARP at the box office O.K. Corral, a place where near-simultaneous movies with same subject matter are forced to shoot it out – the spoils usually afforded to the first picture into Dodge City. In this case, TOMBSTONE certainly had it over EARP in terms of length and enjoyability. And its terrific score by SILVERADO‘s Bruce Broughton was certainly a gunslinger to be reckoned with, even more ironically that it was Lawrence Kasdan’s western that truly impacted his composing career. But now with La La Land revealing the epic scope of James Newton Howard’s WYATT EARP score over three CD’s, that soundtrack match might just be a draw. For if Kasdan never quite found his historical movie’s footing, hearing the full, righteous glory of Howard’s work certainly delivers a western masterwork for the ages.

To be fair, TOMBSTONE was a rip-roaring salute to the myth of the west, a solidly heroic take on good versus evil that merited an equally valorous movie-movie score from Broughton. However, Kasdan took a far more realistic, and psychologically troubling view of a marshal that some might say was more of a mass-murdering vigilante who just happened to carry a badge. Where Kurt Russell arrived in town with full badass credentials, WYATT EARP starts off with Earp bright eye’d and bushy-tailed, then charts his descent into darkness. It’s a more nuanced character arch that lets Howard start off with bright, optimism, introducing a memorable, hoedown wealth of Americana themes that immediately conjure images of cattle, sagebrush and sunsets as opposed to blasting the Clantons. As one majestic melody swells after the other, the abundant strings, guitar and Irish rhythms make it apparent as to just how beautifully Howard has filled the Big Country boots of Jerome Moross, and a cowboy named John Williams for that matter. But soon enough, torment makes its way into WYATT EARP with powerful somberness, with unbalanced dissonance and outright, thunderingly righteous rage, entering the picture with the force on an incoming army. It’s during Earp’s loss of his first wife, the O.K. showdown, the villainous stalking of his family, and his clan’s biblical payback that Howard brings together all of his symphonic forces that make us well aware this is the Oscar-nominated composer behind “The Fugitive” – taking that movie’s pounding suspense to a whole new militaristic level here (before taking his big orchestral guns to even more outrageous levels of heroism for Kevin Costner in WATERWORLD). It’s in EARP‘s berserker rage that the western trappings fall completely away from the score, making it function as a portrait in timeless vengeance. Yet there’s no way this all is going to go out showing its antihero as anything less than an icon, the brassy menace ultimately giving way to the kind of romantically sweeping main theme that’s all about a time when men were men, however flawed they might have been.

La La Land’s special edition of WYATT EARP is a knockout, not only offering the two-plus hours of Howard’s score, but equally impressive alternates, Brad Dechter’s string and accordion funeral source and a deluxe booklet with Tim Grieving’s thoughtful liner notes. Particularly cool is hearing Howard’s synthetized demos that would soon take on epically symphonic flesh and blood, as well as a the composer himself addressing his players at length as to how they’ve helped him reach a career pinnacle with WYATT EARP. That the composer has kept delivering these kind of majestic, stirringly adventurous scores, even on THE POSTMAN, KING KONG and THE LAST AIRBENDER shows much about a passion for unabashedly big music that’s as unbendable as of the many iconic heroes he’s scored.