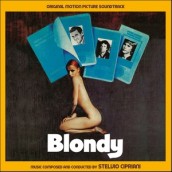 A prolific Italian composer whose hundred-plus film output ranged everywhere between the killer sea life of CAVE OF THE SHARKS and TENTACLES to the sexploitation of MIDNIGHT BLUE and SKI MISTRESS, Stelvio Cipriani’s beautifully melodic scores have always imparted a touch of class, particularly for pictures that combined thrills with heavy eroticism. 1976s BLONDY (also know as VORTEX) featured Ingmar Bergman star Bibi Andersson having a decidedly non-philosophical affair, though the movie’s real object of stripped-down attention was French actress Catherine Jourdan.

Perhaps her most enticing lover here is Cipriani’s gorgeous score, whose languorous, stroking theme for piano, silken strings and cooing female vocalese could easily share a shower with Pino Donaggio’s DRESSED TO KILL. Beyond it’s steamy lushness, BLONDY also shows off Cipriani’s ability to play in a classical vein, employ furious chase music, and romp with samba-style jazz-pop that shows off his studies with Dave Brubeck. You even get two polkas amidst BLONDY‘s breathy delights. Quartet Records has released BLONDY with their usual softcore booklet abandon, and always interesting liner notes by foreign score specialist Gergley Hubai. Given that their past limited edition Cipriani titles like TIMANFAYA and GARDEN OF EDEN have sold out, BLONDY should be quickly snatched up by admirers of a composer who knows how to put sex and violence together with sophisticated results.

Clink on the link to Purchase the BLONDY soundtrack