The actress talks her complicated role on the Showtime series 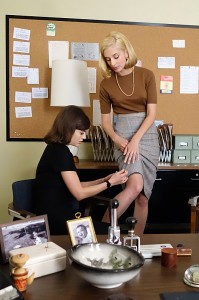 MASTERS OF SEX, now in its second season Sundays at 10 PM on Showtime and renewed for a third, dramatizes the real-life professional and personal histories of sex research pioneers Dr. William Masters (Martin Sheen) and Virginia Johnson (Lizzy Caplan), who have an extremely complicated relationship with one another.

Caitlin FitzGerald portrays Masters’ wife Libby, who starts out simply wanting to be the perfect Fifties housewife, with a beautiful home and two children. Masters, who didn’t want children and couldn’t bear to be seen as flawed, put Libby through hellish infertility treatments in Season 1, even though he was the one who had issues (including a low sperm count).

In Season 2, Libby has a child – by midseason, when the story jumps ahead a few years, she has a second – and is learning to stand up for herself a bit more, but she still has the problem that her spouse is much more entranced with his research (and with Johnson) than with his marriage.

FitzGerald has credits that include the films IT’S COMPLICATED, DAMSELS IN DISTRESS and NEWLYWEDS, as well as a recurring role on GOSSIP GIRL, is in attendance at a MASTERS set visit hosted by Showtime for the Television Critics Association. In the set for Libby’s garden, the actress talks about playing her conflicted character.

ASSIGNMENT X: Is it more difficult to play Libby when she’s in completely trying to be a good Fifties/Sixties wife, or when she’s finding herself and not quite sure what’s coming up out of herself?

CAITLIN FITZGERALD: For me, it’s more difficult to be a perfect Fifties housewife and hold my tongue [laughs], because I long to liberate her, but yeah, I would say it’s harder to keep smiling and being optimistic.

AX: Do you have a favorite scene of yours from Season 1?

FITZGERALD: You know, I love all the scenes where we get to act with a lot of people in the room and everyone’s in Fifties clothes and it feels like a total time warp experience.

AX: How would you describe what’s happening with Libby this season?

FITZGERALD: She gets younger and younger, in a way, as she’s kind of coming into her own. The hair is looser and the clothes are looser. And I think also she had these kids thinking that it would complete the perfect picture she’d made of the good doctor’s wife and the nice house and all of this, and she quickly discovers the kids aren’t that satisfying.

AX: Historically, didn’t Bill and Libby Masters and Virginia Johnson and their kids all live together for awhile?

FITZGERALD: I don’t know if they lived full-time together, but they definitely vacationed together, and there were some times when Libby would take Virginia’s kids and her kids and go on vacation and Virginia would move into the house to work with Bill.

AX: Did Libby know the nature of the relationship between Bill Masters and Virginia Johnson?

FITZGERALD: I think she knew, but was making a choice [to act as though she did not know]. I think Virginia is Libby’s only friend. And also, [Bill and Libby’s] relationship is really complicated and strange and it’s not an easy thing.

FITZGERALD: Kind of blackmail, I think. I mean, I think it is sort of an unspoken agreement they make, where Libby sort of says, “You have what you want in the study, in Virginia, in your life, now I want what I want.”

AX: Do you feel like Libby’s insistence on having children is a way of her asserting herself with Bill?

FITZGERALD: Yeah. I think the baby for Libby was a way of holding Bill to the ground and making this home a permanent situation. But I think it is also for her, because she knows it’s not for him. It’s what she wants, not what he wants.

FITZGERALD: Well, because there are two children and they grow up over the course of three years, because we do a time jump in this season, I worked with all these different kids of all different ages, and I’m not a person who’s around babies a lot, so I learned a lot, I will say. It’s hard working with kids.

AX: How is it playing all those confrontational scenes opposite Michael Sheen?

FITZGERALD: It’s really fun, and the writing is so good – Libby and Bill know each other so well that the things that they get to say, the things that Libby gets to say to him, are really truthful and really biting, I would say.

FITZGERALD: I did a movie in the winter called BROTHER’S KEEPER that Nick Kroll wrote and starred in. It’s a comedy – I play a very different character from Libby Masters.

AX: During Season 1, were you confident there would be a Season 2, or was that a big relief?

FITZGERALD: It was definitely a relief. I mean, we hoped so and we love the story so much, but you never know until it’s definite, so we’re very excited to be here.