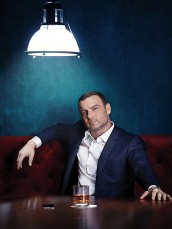 The series executive producer also talks the end of SOUTHLAND 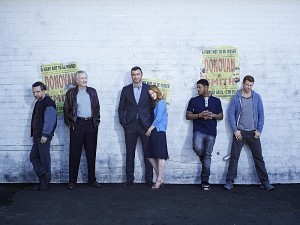 In Showtime’s RAY DONOVAN, now in its second season Sundays at 9 PM and renewed for a third, Liev Schreiber stars as the title character. Ray is a Boston-born Hollywood “fixer” who is okay with using blackmail and violence on behalf of his clients. But the turmoil of Ray’s job is nothing compared with his family conflicts. He and wife Abby (Paula Malcomson) have both had affairs, their two teenaged children (Kerris Dorsey, Devon Bagby) are in rebellion and Ray’s brothers (played by Eddie Marsan, Dash Mihok and Pooch Hall) all alternately depend on and resent their oldest sibling’s take-charge tactics. As for Ray’s ex-con father Mickey (Jon Voight), Ray tried to have the old man killed last season, a move that backfired and put them both high on the radar of the FBI.

Specifically, Ray has gained the ire of Los Angeles FBI head honcho Ed Cochran, played by Hank Azaria, to the extent that each is now trying to take the other down.

RAY DONOVAN’s creator/executive producer Ann Biderman, who previously brought forth the excellent series SOUTHLAND, is at a Q&A panel Showtime holds for the Television Critics Association for the series. She stays around afterward to answer some more questions.

ANN BIDERMAN: I think both. Yes, he could exist without Mickey, but somehow the two of them together just makes it richer, I think. [Without Mickey], it would be a more traditional fixer show, which is not what I wanted to do. I really wanted to do a show about family. It’s the mash-up that interests me, it’s the combination of family and fixing stuff. So I think without Mickey, you have a much more traditional fixer show, which doesn’t interest me on the same level.

AX: Have you ever met someone in real life who is like Ray Donovan?

BIDERMAN: Not really, no. I’ve met p.i.s and I’ve done cop stuff. So it’s an amalgam, it’s a mash-up. It’s not really based on anyone. I wanted to do a show about a fixer and I didn’t want it to be like any other and I was interested in Boston and a family, I wanted a family in this, and the idea of doing kind of a mash-up of a fixer in Hollywood who kind of doesn’t belong to the town, who is kind of anomalous, and Boston crime – it just all came together at a certain point.

AX: This season, it seems like Ray’s brother Bunchy, played by Dash Mihok, is finally getting himself a little more together, while brother Terry, played by Eddie Marsan is starting to unravel between sexual guilt and homicide guilt?

AX: How carefully do you have to calibrate the rise of one and the fall of the other and where they are in relation to Ray? Do you do this with a graph, do you just do this in discussion in the writers’ room?

BIDERMAN: We have to craft it very carefully, because you don’t want to have the same beats for the same characters and you want contrast and you don’t want everyone to be going through the same thing at the same time. So you do it very carefully, and lots and lots of discussion about who’s on top and who’s not and what’s happening and does it feel too similar to another character and does it create a good contrast and all of that.

AX: This season, you also brought in Hank Azaria as the ambitious FBI official and Wendell Pierce as the parole officer who winds up under Ray’s thumb. Did you write either or both roles specifically for those actors?

BIDERMAN: No. I did not. But we were very, very lucky to get both of them.

AX: When did you get the idea that Azaria’s character plays in a rock ‘n’ roll cover band in his off hours?

BIDERMAN: I can’t remember exactly at what point, but it just seemed amusing that that was his thing, that he was kind of groovy and did that and “Eddie and the Undercovers” was the name he used and we had a lot of fun with it. And picking the songs and shooting it and doing the poster for the band with the wild mustangs, because we had a lot of fun with Hank doing that. He was such a good sport and he’s just a delight, as is Wendell.

AX: To go off-topic for a moment, were you content with the way SOUTHLAND wrapped up at the end of five seasons?

AX: Back to RAY DONOVAN, ideally, how many seasons would you like to see this go to tell the whole story?

BIDERMAN: I don’t know. I haven’t really gotten there yet. I don’t know. I know people start to think about that at a certain point. I didn’t design it with an end point in mind. There’s a lot more story I’d like to tell, but you kind of know when it’s over. You feel it. And the audience tells you. A lot of it depends on how lucky we are and how the ratings are and how Showtime feels about it. So I don’t know. But no, I don’t have a particular [finale in mind]. When I dreamed up this crazy show, I had some ideas about it, but …