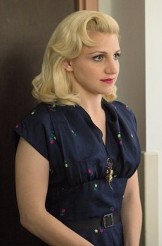 © 2014 Showtime
Annaleigh Ashford as Betty in MASTERS OF SEX
Interviews

The actress talks about her complex role as Betty 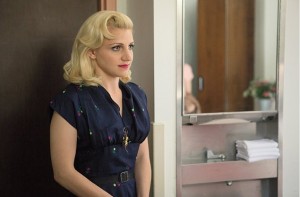 Annaleight Ashford as Betty in MASTERS OF SEX | © 2014 Showtime

Showtime’s MASTERS OF SEX, now in its second season on Sunday nights, dramatizes the life and work of pioneering sex researchers William Masters, played by Michael Sheen, and Virginia Johnson, played by Lizzy Caplan. Although Masters and Johnson – and their research – were real, a number of fictional and composite characters appear in the series.

One of the most unusual original characters is Annaleigh Ashford’s Betty DiMello. During the course of MASTERS OF SEX so far, we’ve seen Betty go from a lesbian prostitute who is instrumental in helping Masters and Johnson get their study started to an upwardly mobile woman who is unaware that her adoring businessman husband Gene, played by Greg Grunberg, was actually one of her clients at the brothel. Betty and Gene are starting to get past some whopping lies she told him, but now Betty’s ex (Sarah Silverman) is returning to the scene to add new complications.

Colorado native Ashford – who is no relation to MASTERS series creator/exec producer Michelle Ashford – has had a number of TV roles and was one of the voices in FROZEN, but MASTERS OF SEX is her first series regular role. She has had a number of starring roles on Broadway, including taking over as Glinda in WICKED.

Ashford is on the red carpet at the Paley Center event for MASTERS OF SEX. She’s about to be whisked inside for the main Q&A session, but she takes a few moments before going in to answer some questions.

AX: Betty has gone through so many different personas …

AX: Do you have a favorite one to play?

ASHFORD: Right now, it seems so interesting getting to explore her as a wealthy lady. But what is so interesting is that she will always have a secret, like so many of us. So that I think is the most exciting thing to play, is that she’s a woman with many secrets, always, forever.

AX: Did you know you Betty was going to marry Gene DiMello, played by Greg Grunberg?

ASHFORD: I had no idea. We’re having a great marriage. He’s incredible. He’s an amazing actor and an amazing human.

AX: Do you enjoy MASTERS OF SEX as a viewer?

ASHFORD: Oh, my God, it’s beautiful. You know, I did the first couple episodes, and then I had to go back to New York and do a Broadway show called KINKY BOOTS.

I played Lauren, the factory worker who fell in love with Charlie. But when I got to watch [MASTERS OF SEX], it was all new to me. I didn’t know where the twists and the turns were and where the story was going. It was beautiful, I was so proud to be on it. It’s incredible.

AX: Did you have to gear up for the scenes where Betty goes up against Bill Masters, played by Michael Sheen, and is essentially blackmailing him?

ASHFORD: Oh, my God, it’s incredible. How did I get to have explosive fight scenes with Michael Sheen? I mean, that’s every actress’ dream because he’s incredible, he’s just outrageously gifted as an actor and he’s such an amazing human. So I have to tell you, when you get to do a scene with him, it’s easy to gear up for it. You’re ready to go.

AX: At this point, do you consider yourself more a Broadway person or a film/TV person?

ASHFORD: Well, you know, I hope that I will have the fortune to get to do both my whole life. My heart will always be on the stage, but I feel like TV and film are such a beautiful method and device of storytelling. So hopefully I’ll get to be a girl who gets to do both. Let’s put it out there.