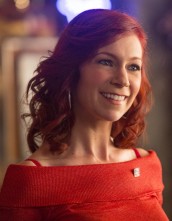 The actress talks TRUE BLOOD, THE GOOD WIFE and PERSON OF INTEREST 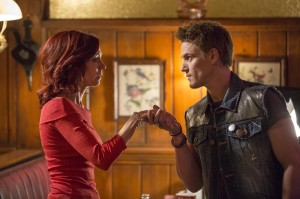 Georgia native Carrie Preston is one of those proverbial hardest-working people in show business. She’s in her seventh season as Arlene Fowler Bellefleur on HBO’s TRUE BLOOD, won an Emmy for her recurring guest role as attorney Elsbeth Tacioni on CBS’ THE GOOD WIFE and plays artist Grace Hendricks, love interest for Harold Finch, played by Preston’s real-life spouse Michael Emerson, on CBS’ PERSON OF INTEREST. Additionally, Preston is a partner in the production company Daisy 3 Pictures and has produced and directed two feature films there, 29th AND GAY and THAT’S WHAT SHE SAID.

Preston is at a party thrown by CBS for the press, where she talks about all of her varied projects.

AX: Does the death of Will Gardner, played by Josh Charles, affect Elsbeth on THE GOOD WIFE?

CARRIE PRESTON: I mean, I would imagine that when I do come back that they will have me at least address that, because my character worked closely with his character, so I’m sure that Elsbeth is going to deal with lots of that. Elsbeth feels things very acutely, so I think they would give me a moment to [react].

AX: Were you at all taken aback by Will’s murder, or are you on so many shows with people coming and going that it just seemed normal in a way?

PRESTON: I was a fan before I was a cast member of GOOD WIFE. I did know it was coming, but it was still shocking to see it, but I thought they handled it brilliantly.

AX: Do you know how much you’ll be on GOOD WIFE this upcoming season?

PRESTON: I wish it was up to me. I think it’s probably going to be around the same as what I’ve usually been doing, but I don’t know.

AX: Can you talk about Arlene this season on TRUE BLOOD?

PRESTON: I’m very, very pleased with what they’ve done with Arlene. It is a breakneck speed, the show this season, and there’s going to be some sad stuff and some joyous stuff, just like life.

AX: On PERSON OF INTEREST, you play the love interest of your real-life husband. Often, actors have to leap into a scene with somebody they just met and pretend they know each other real well. And you have the exact opposite – you have to act like you’re just getting to know each other.

PRESTON: It’s true. We have this complete history with each other, but we have to play these scenes where we were just falling in love, so we had to kind of reverse. But there’s a trust there that is so refreshing, because there’s no need to even discuss the scene. We just have to show up for each other.

AX: Do you ever get psychic whiplash, going between those three characters within a single season, because they’re three very different people?

PRESTON: No, I don’t get whiplash. The characters are very, very different, but that’s what we like as actors, is that we get to be versatile, and that’s my dream, is that I get to continue to play characters who are so different. But that’s the joy of being an actor, is really being able to stretch and play different roles.

AX: Do you have a favorite among those three?

AX: What do you love most about each of them?

PRESTON: Well, TRUE BLOOD is a singular thing in my career, because I’ve never had a show that I’ve been a part of that lasted for seven years. It’s near and dear to my heart because of the longevity of it, and also the evolution of my character – they’ve given me a really extraordinary arc. THE GOOD WIFE was a gift. I didn’t know it was coming, I didn’t ask for it, it was given. I didn’t audition. It brought me an Emmy, so I can’t complain about that [laughs], and also, I don’t think there’s another character like her on TV, so it’s exciting to play someone like that. And PERSON OF INTEREST, I get to act with my husband. What’s better than that?

AX: What’s going on with your production company Daisy 3?

PRESTON: We’re [making] a Web series called DARWIN THE SERIES, so if you go to darwintheseries.com, you can watch the episodes [there are twelve total].

AX: Is this about Charles Darwin?

PRESTON: No, it’s about a life coach who is falling apart. His last name is Darwin. But yes, there are some evolutionary metaphors that happen.

PRESTON: Definitely. You’re taking much smaller bites, but it’s also the wild, wild West, so it’s very hard to figure out how to monetize it and get it out there.

AX: Are you directing DARWIN?

PRESTON: I directed all the episodes except the finale.

AX: Did you also write any of it?

PRESTON: No, I just directed it. I wouldn’t claim to be a writer. I have written stuff, but I haven’t produced anything I’ve written yet. That’s the next step.

AX: Is there anything you’d like to say overall?

PRESTON: I have to say, I feel very blessed to be a part of three such distinct shows. And I’m grateful for the audiences that are watching them, otherwise they wouldn’t be here.