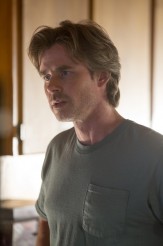 More surprises, as Bill loses his temper and Sarah Newlin is helpful 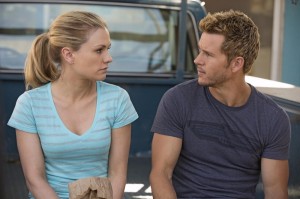 “Karma” is one of those TRUE BLOOD episodes that begins and ends with everyone in stages of high drama, mortal peril or both. It’s very energized and fairly suspenseful in matters great and small.

Eric (Alexander Skarsgard) and Pam (Kristin Bauer van Straten) get captured by the forces of the Yakanomo Corporation. The new company head, Mr. Gus Jr. (Will Yun Lee), threatens them with death unless they reveal Sarah Newlin’s (Anna Camp) whereabouts, as he wants to kill her. Pam brokers peace between the prideful Eric and Mr. Gus Jr. and they all head to Texas.

When James (Nathan Parsons) offers his blood, Lafayette (Nelsan Ellis) finally agrees to one final V-trip with his aunt Lettie Mae (Adina Porter), as she insists this is the way to find Tara’s (Rutina Wesley) spirit. Lafayette is surprised that he and his aunt share the same vision, with Tara leading them to the front yard of her old home and digging a hole. When Lettie Mae’s husband, the Rev. Daniels (Gregg Daniel), insists she choose between him and the visions, she sadly lets him go.

Sarah has in fact gone to her vampire sister Amber’s (Natalie Hall) house. Amber is angry, perhaps enough to kill Sarah, especially when Sarah insists that she’s changed – until Sarah reveals that she swallowed the antidote for Hep-V. When Eric, Pam and the Yakanomo people show up, Eric instantly notices (how can he not?) that Amber is cured of Hep-V.

Bill (Stephen Moyer), meanwhile, is suffering from a weirdly aggressive version of Hep-V. He makes a phone appointment to see his lawyer. Jessica (Deborah Ann Woll) overhears and calls Jason (Ryan Kwanten), begging him to get Sookie (Anna Paquin) to come over.  The lawyer says that lack of vampire rights laws make it impossible for Bill to bequeath his property to progeny Jessica, then says if Bill forks over ten million dollars, there may be a way around it. The lawyer is so offensive that Bill winds up losing his temper and killing her.

Jason’s girlfriend Violet (Karolina Wydra) overhears him on the phone with Jess – she previously heard them having sex the night before – and comes to the wrong conclusion.

Sookie realizes that she may have accidentally given Bill Hep-V, since she let him drink from her after she was sprayed with blood from exploding Hep-V-infected vamps. A blood test shows that Sookie is a Hep-V carrier. Sookie goes to Jess; the two women weep in each other’s arms. Bill comes home to find them both waiting for him.

Jason finds Violet has written him a goodbye note, to his relief. Except …

Andy (Chris Bauer) finds his teen daughter Adilyn (Bailey Noble) and his fiancée Holly’s (Lauren Bowles) teen son Wade (Noah Matthews) in the midst of sex. Andy is furious with Wade; Holly is furious with Andy for putting hands on Wade. By the time Arlene (Carrie Preston) has brokered peace between the angry grown-ups, Wade and Adilyn have gone off together. They are found by Violet, who acts nice, but happens to know that Adilyn is under the protection of Jessica – who Violet now hates with a fiery passion.

Will the Yakanomo Corp. and/or Eric and Pam be able to get a mass cure from Sarah’s blood before someone gets so mad at her once more that she’s dead before this can happen? What’s up with Bill’s crazy-fast Hep-V? What’s up with the hole vision-Tara is digging? Will someone find Violet before she can kill the kids?

It’s fun to see Bill’s rectitude and Eric’s stubbornness come to the fore again, and the scenes between siblings Sookie and Jason are both human and humane. Bauer, Bowles and Preston are a hoot working all together and Bauer van Straten remains sublime. As for Camp, she is a delightfully self-absorbed villain, showing us that Sarah is so caught up in her own self-made mythos that she’s incapable of recognizing the damage she’s done. It’s a great performance of a great character.

“Karma” is aptly titled for what happens within a number of its narratives. It’s also the latest in a string of powerful episodes that remind us how much we’ll miss TRUE BLOOD when it’s gone.