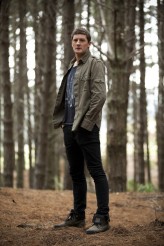 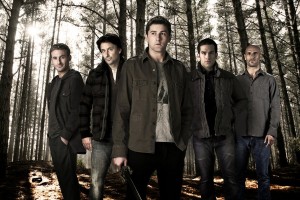 The cast of THE ALMIGHTY JOHNSONS | © 2014 ALL3MEDIA & South Pacific Pictures

THE ALMIGHTY JOHNSONS has already shot and aired three seasons in New Zealand, but its first season just started airing on Syfy Channel in July, Fridays at 10 PM. In the series, contemporary New Zealand native Axl Johnson finds out on his twenty-first birthday that he’s actually the incarnation of Odin, king of the Norse gods. More, Axl’s three brothers are also incarnations of Norse gods. Their powers aren’t all that powerful yet, but they will be if Axl can complete a quest. If he doesn’t complete it, they all die and possibly the world will come to an end. No pressure, dude.

Emmett Skilton, who plays Axl, is at Syfy’s Beverly Hilton poolside premiere of SHARKNADO 2: THE SECOND ONE for the Television Critics Association. The New Zealand native began his screen performing career in 2005 with an episode of the series SEVEN PERIODS WITH MR. GORMSBY. He appears to be taking international fame (and the SHARKNADO screening) in stride.

AX: When you were preparing to play Axl/Odin, did you go think, “Now, what would I actually do if my family told me I was the incarnation of a Norse god?”

EMMETT SKILTON: Well, in a way, I didn’t have to do any prep at all, because my character came into it as a really disinterested in responsibility kind of teenager who would rather drink and hang out with his best friend and try and chase tail than have any kind of interest in anyone else’s world. Being thrown into the deep end of that, I kind of just had to go along for the ride. Anything Axl had to do, I was doing for the first time as well.

AX: Do you have a lot of brothers in real life?

SKILTON: I do. I’m one of four brothers. Axl is the youngest of four brothers; I am the third in line in my family. So in terms of drawing on actual situations, we’ve always had a relationship that’s very close, but at the same time, there’s turmoil here and there, and for the Johnson family, we have more turmoil than anything else to begin with and you really see this rift in the family, and my character’s role in a way is bringing them all together. They all need to support my character through this journey, and they have to put their shit aside and help.

AX: Did you know anything about Norse mythology before you got involved with the series?

SKILTON: I knew about Thor and I knew about some of those things, only what I’d seen on television or in the franchises like THOR. But I’ve learned so much from reading the scripts and chatting to fans. In fact, there are so many fans that are so dedicated, they know more about the world than I could ever imagine anyone could know, which is a great honor, really.

AX: THE ALMIGHTY JOHNSONS both takes place in and is made in New Zealand, right?

AX: The HERCULES and XENA series both shot in New Zealand. Is there anything whatever left from those shows, with all of their Greek gods, that your show can use?

SKILTON: The funny thing is, we don’t use a lot of props that are science-fiction-based. Because it’s grounded in reality, we don’t necessarily delve into mixing the physical world [of the gods] too much; it’s much more referred to. But my character has a sword that is basically the sword of Odin that he gets to carry around, which he uses quite a lot in the show for random things, such as cutting the heads off mannequins or threatening people. But also, we had a lot of the XENA actors involved. So we’ve got the meat props [laughs]. 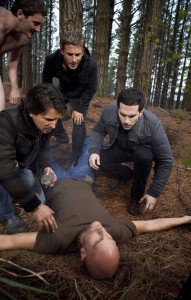 The cast of THE ALMIGHTY JOHNSONS | © 2014 ALL3MEDIA & South Pacific Pictures

AX: Have you done any sword training or sword work?

SKILTON: Yes. Part of my character’s ability is that when he became Odin, he suddenly had these powers. These strange things that he couldn’t control would come up at random times, one of which was the fact that this sword he was given, he was strangely extremely good with. So I had a great stunt coordinator on board who I worked with over the first month of shooting. We had a few, but Mark Harris was our head stunt coordinator. And I believe that he was involved with XENA and HERCULES and YOUNG HERCULES as well. So he’s great. We would work nights and before we would shoot certain scenes and choreographed them so I got as sharp and as good as I could get.

AX: Do you feel any aptitude for working with the sword?

SKILTON: Oh, absolutely. I loved it. I’m a guy and I grew up a guy. Anyone playing with a weapon enjoys themselves. You play cops and robbers in the backyard or some people might have grown up playing with swords. Me particularly, it was climbing trees and pretending I had a gun in my hand while we were [playing] at war with each other in my family. But I think being able to get paid to have fun with swords and fight each other in a controlled environment, of course, is great. One of the troubles that I had was trying not to make the sound effects of the sword, because that’s what you grow up doing. “Ding, ding, ding!” We had the directors come up every so often and say, “You probably shouldn’t make that noise, we’ll put it in later, we promise.”

SKILTON: At the moment, I’m stuck in the p.r. [for THE ALMIGHTY JOHNSONS], but I’m also developing some short films, which I’m producing as well, and I have some theatre coming up in L.A. quite soon, hopefully in October. I’m part of a great [play] called GRUESOME PLAYGROUND INJURIES, which we’re hoping to put on on Santa Monica Boulevard.

AX: Is there anything else you’d like to say about THE ALMIGHTY JOHNSONS?

SKILTON: Yeah. [joking] There’s a lot of nudity in it, so watch it for [that] and go along for the ride.