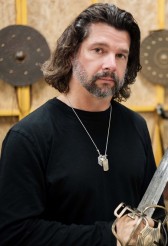 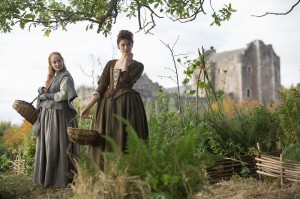 Ronald D. Moore, whose many credits include developing and executive producing BATTLESTAR: GALACTICA for Syfy (then SciFi), has brought OUTLANDER to premium cable television. He and lead actor Heughan both wear kilts to Starz’s panel on the series for the Television Critics Association press tour, with lead actress Balfe and author Gabaldon in somewhat more conventional (for the U.S., at least) attire.

On the panel and in a walk and talk discussion afterward, Moore provides insight into OUTLANDER.

AX: How and when did you become aware of the OUTLANDER books?

RONALD D. MOORE: I became aware of the property a few years back. My wife Terry [Dresbach, OUTLANDER’s costume designer] and my producing partner Meryl Davis turned out to both independently be fans of the books. I hadn’t read them, and we were all having dinner once, and they said, “Oh, you have to read these books. They’d be great for a project.” So I read it, and my immediate take was, it’s a TV show, just the nature of the story, the scope of the story. I didn’t understand what the two-hour version of the book was [in terms of making it as a theatrical film]. When we sought out the rights, they were trying to develop a feature version, but just couldn’t quite make it play, because it’s just too big of a story, and all the things that people love about it are the world and taking your time with the story and developing the characters, and you could only really deliver this piece of material in a dramatic series.

AX: Can you talk about the casting of Sam Heughan as Jamie and Caitriona Balfe as Claire?

MOORE: It was tricky. From the outset, I thought we all kind of said to ourselves, “It’s going to take forever to cast Jamie, he’s going to be the last one to be cast, because [in] the books, there’s so much about who Jamie is and people have had an image in their heads of him for so long. He’s ‘the King of Men,’ as we call him in the writers’ room. Who is that going to be? It’ll take us forever. Well, we’ll probably cast Claire quickly, there are a lot of great British actresses, she’s more of a modern character anyway, she’s recognizable. It’ll probably go like that.”

And of course, it was exactly the opposite. Jamie was the first cast in the entire show. We just saw Sam’s tape and went, “Oh, my God, there he is. That’s Jamie.” So we just grabbed him, cast him, and then Claire took forever. Because it’s such a demanding role and it’s central to the show, she’s in every scene every day, and you have to sort of be inside her head and you have to be comfortable with her, the audience has to really like her, and she has to be intelligent, you have to watch her think many times, and she’s our window into the entire story. So that was critical, and we saw a lot of really good actresses, a lot of casting. But it was kind of the same thing – we were starting to get a little panicky, because we were getting closer and closer to shooting, we just don’t have our Claire, and then suddenly we saw Caitriona’s tape and it was like, “Oh, well, there she is. That’s Claire.” And so it’s just like, “Boom.”

MOORE: It’s hard to say at this point. I mean, I know for the second book, DRAGONFLY IN AMBER, it’s still very much Claire and Jamie. So we’ll wait and see and see how it’s all developing at that point. I think my impulse is still to follow the books and continue to do that, because I think it’s the right way to go, but we’ll have to make that call when we get there.

AX: Diana Gabaldon has said the production company consults her on scripts, and she’s very touched with how much trust she’s been shown …

MOORE: And it’s reciprocal. She trusts us with something that’s very personal to her, that’s her creation, and it’s my job to interpret and try to develop it for another audience. But it was important from the beginning that we have a good relationship with Diana. You know, I’m a writer. She’s a writer. As a writer, I wanted her to feel proud of what we do with her work, so it’s important from the outset to say, “We want you to be one of us. We want to include you. We want to show you things. We want to talk to you and make you feel comfortable all the way through.”

AX: Are you looking to GAME OF THRONES at all in terms of how they handle books with a fan following and an author who’s involved with the series adaptation?

MOORE: I don’t know too much about how they do that internally. I know that [GAME OF THRONES author George R.R. Martin] is on the show, he’s written some of the episodes, as I recall, but I haven’t actually read those books. I know the show and I love the show, but I couldn’t even comment on how they adapted it. It’s a very different project. GAME OF THRONES is many multiple storylines, and so they’re cutting around to different storylines and moving puzzle pieces, and we’re following a lot of different characters in a lot of different places. Ours is one central narrative and it’s first-person narrative, and it’s one story. So there’s not a lot of lesson to learn there.

AX: Do you have a favorite aspect of OUTLANDER, as a producer or a storyteller or a viewer?

MOORE: I just love the period. The fact that it’s two periods [laughs], and neither one is contemporary. I like that we’re dealing with the 1940s and the eighteenth century. It’s just really fun and interesting for me, because I love history and I like getting into the details of those two times – how we can do the costumes and the set design and how we shoot them and really sort of be able to deliver a double-period show is really fun.

AX: Is there anything else you’d like people to know about OUTLANDER right now?

MOORE: Not in particular. I think it’s a fun, big, epic story. I keep pitching it as an intimate show in an epic setting. I think that’s one of the things that sets us apart.