The final season gets off to a sad and rocky start 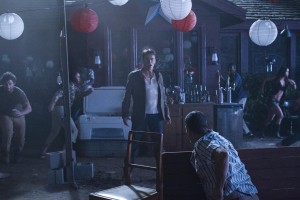 TRUE BLOOD’s seventh and final season begins with “Jesus Gonna Come Here.” Season 6 ended at Bellefleur’s, formerly Merlotte’s, where there’s a vampire/human mixer in progress. With crazed Hep-V infected vamps roaming the countryside, uninfected vampires and humans need one another. The humans need protection and the vampires need an uninfected food source. The mixer is designed to allow vampires and humans to choose their partners in this co-dependent necessity.

Season 7 opens with a full-scale battle between nearly all of the main characters at Bellefleur’s and a huge band of Hep-V infected vamps, who attack the gathering. Tara (Rutina Wesley), Sookie’s (Anna Paquin) best friend who has gone through being vamped and a whole bunch of other traumas, who has been in every episode, is killed within the first three minutes. Offscreen. We are informed of Tara’s death by her hysterical mother Lettie Mae (Adina Porter).

In subsequent and related news, humans Arlene (Carrie Preston), Holly (Lauren Bowles) and Sam’s (Sam Trammell) pregnant girlfriend Nicole (Jurnee Smollett-Bell) are all kidnapped by a gang of Hep-V-infected vampires, who take great pleasure in tearing victims apart in front of their prisoners.

Although Sheriff Andy Bellefleur (Chris Bauer) has a lot to rightly blame on Bill Compton (Stephen Moyer, who also directed the episode), the two pair up to look for the missing women. Jessica (Deborah Ann Woll) volunteers to protect Andy and his half-fairy daughter Adilyn (Bailey Noble) as atonement for having somewhat accidentally killed Adilyn’s three sisters in the previous season.

Even though both Andy and Jessica warn Adilyn not to trust Jessica or allow her inside, Adilyn does both. Jessica does battle with a Hep-V vampire on the lawn and Adilyn invites her protector inside before the sun rises. Jessica overcomes her desire to feed on the half-fairy girl.

Lafayette (Nelsan Ellis) finds himself being protected by Jessica’s boyfriend James (Nathan Parsons). Jason (Ryan Kwanten) and his super-possessive vampire girlfriend Violet (Karolina Wydra) finally get it on outdoors, despite the danger posed by the Hep-V vamps, without incident.

Sookie reads everyone’s minds at a church gathering, where Lettie Mae tells the former lover of vampires she’s not welcome. Sookie hears similar thoughts in the minds of many of the congregation – and even hears her werewolf boyfriend Alcide (Joe Manganiello) thinking something about Sookie and the dead. Extremely angry, Sookie goes walking off by herself in the night. Alcide finds her, they argue about his thoughts and her reaction, and they finally make up and make love.

In another part of the world, Pam (Kristin Bauer van Straten) is playing vampire Russian roulette as she continues to search for her missing maker Eric.

All through the episode, people mourn for and eulogizeTara. We don’t actually see her die and Tara’s mother has historically been an unreliable narrator, but since actress Wesley has said in interviews following the episode’s airing thatTarais really dead, apparently we’re meant to take Lettie Mae’s word for it, as the other characters do.

If this is a fakeout, bravo, but it’s a distracting one. If it isn’t, yes, killing off one of your main characters off-screen and telling us about it is an unusual move when the actor is available. The reason this is unusual is that most creative people fear creating a dynamic that is unsatisfying, frustrating and prevents viewers from being able to focus on much else in the episode, which is what happens here. The problem is brought into sharper focus because there isn’t a lot that follows with much dramatic urgency. Sure, we’re generally concerned about Arlene, Holly and Nicole, but they are supporting characters. Bill and Andy aren’t going to kill each other right now; we like Sookie and Alcide as a couple, but them having a spat isn’t hugely gripping.

Jessica’s struggle with her own instincts is moderately gripping, thanks largely to Woll’s strong performance. Pam is always watchable and van Straten is always great, so those scenes work well also – although, again, as Tara’s maker, shouldn’t Pam sense the loss of her “daughter”?

Sex can be funny on TRUE BLOOD, but the Jason/Violet must-get-it-on-even-though-we-could-die-out-here is a little too broad to get a laugh.

TRUE BLOOD is back, and that’s a good thing, but it would have been better if it had returned with an episode that didn’t load everything into one big shock at the start that overshadows everything else.