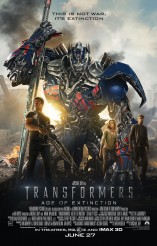 Some good elements, but this is one long movie

The fourth film in the series based on the Hasbro toys, the TV series spawned by the toys and now the three previous TRANSFORMERS movies, TRANSFORMERS: AGE OF EXTINCTION runs 137 minutes. To be clear: there are plenty of movies that run longer and need every second of their running time. There is nothing wrong with a long science fiction and/or fantasy movie. There is nothing inherently wrong with a movie based on a toy.

In fact, TRANSFORMERS: AGE OF EXTINCTION isn’t a bad movie, just an overly long one. Michael Bay, back in the director’s chair as he’s been for all the other TRANSFORMERS films, has calmed down his editing style enough so that we can understand the action, and he creates some thrilling, weird imagery here. It’s just that when the characters stop to talk, which they often do, they seldom say anything that resonates. The script, credited to Ehren Kruger, and the pacing make for an odd case where the exposition often makes more of an impression than the character moments.

This isn’t to say there’s no fun to be had with the humans, only that there is too much time spent with them. Even scenes with our Autobot friends talking amongst themselves, which have some humorous bits, go on past the point of entertainment. If a scene requires a certain amount of running time to reach its dramatic, comedic or even informational goals, fair enough, but AGE OF EXTINCTION doesn’t seem to know when to stop.

A prologue shows us what really caused the extinction of the dinosaurs. Then we cut to the present where, in story terms, it’s been five years since the events of the previous TRANSFORMERS film, DARK OF THE MOON (which was released in 2011, for those keeping score). Even though the heroic Autobots saved Earth from the evil Decepticons, all Transformers are now suspect and unwelcome; Autobots are being covertly destroyed.

Mark Wahlberg, who toplined PAIN & GAIN for director Bay, stars here as Cade Yeager. Cade is an unsuccessful but still optimistic mechanical inventor working outside a small town inTexas. When Cade buys a rundown local movie theatre, he’s surprised to find there’s a truck inside. But that’s not just any truck – hint: it’s known that Transformers like to disguise themselves as motor vehicles – and soon Cade, his teenage daughter Tessa (Nicola Peltz), Cade’s assistant Lucas (T.J. Miller) and race driver Shane (Jack Reynor) are caught up in a quest that winds up with the fate of the Autobots and the world on the line.

There are some topnotch set pieces, and (no spoiler if you’ve seen the posters) it’s entirely cool to see Transformers that can become giant fire-breathing beasts. There are plenty of action scenes that are very smart and swift.

The indispensable Peter Cullen is back as the voice of the likewise it-just-wouldn’t-be-TRANSFORMERS without him Optimus Prime. There’s also a creepy, callous new villain, Lockdown, voiced by the excellent Mark Ryan (Mr. Gates on Bay’s BLACK SAILS) with an intriguing agenda. Even the human characters provide some worthwhile cinema, especially the irritable scientist Joshua Joyce played by Stanley Tucci. Wahlberg is good as a gentle, sweet man rising to an enormous occasion and Grammer makes us believe that his tough, ruthless CIA agent genuinely believes that everything he does is what’s best for humanity.

TRANSFORMERS: AGE OF EXTINCTION has a lot of good stuff. It’s just that, in order to get to it, you have to sit through the rest of a movie that could have been made much tighter without sacrificing quality or coherence.