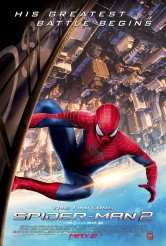 THE AMAZING SPIDER-MAN 2 puts together two different, significant villains from the comic book series, plus a back story about Peter Parker’s parents and with a version of a very famous incident that anyone familiar with Spidey’s history will see coming a mile away. This is all fine, except that the storylines don’t really converge effectively, which gives parts of the film a “meanwhile back at the ranch” quality.

Director Marc Webb, who also helmed the initial THE AMAZING SPIDER-MAN back in 2012, is perfectly at home with what still works best here – Andrew Garfield’s sensitive, committed performance as the title character and the joy that Spidey, aka Peter Parker, takes in virtually flying over Manhattan as he slings strands of web and then swings on them from building to building or car roof to car roof. Here’s a film that uses its 3D to great advantage, letting us share in the sensation of soaring through the urban canyons between skyscrapers.

In AMAZING 2, Peter has adapted pretty well to being a superhero with a secret identity, fighting crime and keeping citizens safe. He genuinely enjoys helping people out, loves his Aunt May (Sally Field) and seems okay with his terribly underpaid job as a newspaper photographer who somehow always gets the best shots of Spidey. Despite this, two things eat away at Peter. One is his lifelong question as to why his parents abandoned him without explanation. The other is his love for Gwen Stacy (Emma Stone). Gwen reciprocates, but Peter swore to Gwen’s dying father (Denis Leary) that he’d keep her safe, which means keeping her away from crime-fighting, which means staying away from her altogether, despite her protests and Peter’s longing.

Flashbacks show us what happened to Peter’s mother (Embeth Davidtz) and scientist father (Campbell Scott), which clears up some questions as to how and why certain things work as they do.

That’s a lot of web to cover in one movie. Garfield is entirely watchable and invested in every moment – he’s funny, he’s romantic, he’s anguished, he’s determined and we believe it all. He also has great chemistry with leading lady Stone, who may not have the best-written role but plays it with conviction nonetheless.

DeHaan does a great job as the aggrieved patrician youth, and Chris Cooper shows up briefly as his ailing father.

Granted, this is a comic book adaptation, but Foxx seems a shade too gosh-golly innocent in his early scenes, though to be fair, that seems to be what the script and direction indicate he ought to be doing. Some of the effects connected with his character are very impressive, a few less so.

The problem is that the two villains are not integrated with one another, only one has impact on the romance, and while the flashbacks affect the present, they provide more of an expository update than feel like they’re moving the story forward. We seem to start and stop a number of times, so that the movie doesn’t flow smoothly. It also tends to suffer whenever Spidey is off-screen.

The sets and production design by Mark Friedberg are stunning, especially a clock tower of great significance. Purists may be unhappy, not so much about the setting, but about some altered details that deflect the famed “great responsibility” a bit.

Is THE AMAZING SPIDER-MAN 2 worth watching? Yes, especially on the big screen, when we can feel ourselves flying along. AMAZING may be overstating the movie’s impact, though.