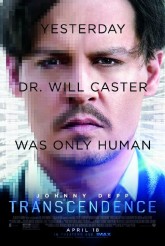 TRANSCENDENCE tackles some huge ideas. What is consciousness? Can consciousness be proved? How can we prove our identity? What, for others, constitutes acceptable, valuable proof? And that’s before Jack Paglen’s script takes on the huge issues of whether some loss of autonomy is an acceptable trade-off for life and health.

These issues don’t just get lip service but form much of the narrative spine of TRANSCENDENCE, and for the better part of the film, it works. Alas, whether someone got overly scissor-happy in the editing room or the writing was genuinely fuzzy (this reviewer’s uneducated guess is the former), the last third accelerates so much that it’s hard to know exactly what’s happening, what’s been gained, what’s been lost and what we’re meant to feel about any of it.

The movie starts in flash-forward mode, showing the modern world as it might be shortly after losing all technology – no electricity, no motors, zip. Max (Paul Bettany), wandering through an abandoned backyard, muses that he knew Will (Johnny Depp) and Evelyn Coster (Rebecca Hall) better than anyone.

Five years earlier, Will and Evelyn are blissfully in love. Will is a leading expert in artificial intelligence, but he’s happy to just share his work with his friends; Evelyn is the one who wants to use it to make the world a better place. Their fellow scientist friend Joseph (Martin Freeman) works with PINN, an artificial intelligence that seems to have her own personality, but who knows? This becomes less academic after Will begins to succumb to an injury. Evelyn persuades Max, against his better judgment, to help her try to upload Will’s consciousness into a computer. Will is game, recording himself reading every word in the dictionary so that his computerized self will sound like him.

Miraculously, this seems to work. Then Will (or is it?) suggests putting himself online so that he can function better. Evelyn is sure this is Will; Max is suspicious, as Will never before had any interest in the rest of the world, much less accumulating money. Before long, A.I. Will and flesh-and-blood Evelyn are on the cusp of changing just about everything. But is that really Will? If it’s not, what is it doing? If it is, what does he want?

There are moments when TRANSCENDENCE is on the verge of being extraordinary, only to be tripped up not only by a few logistical questions, but by the fact that special effects and explosions start overtaking the narrative. It’s not that these shouldn’t be part of the story – they work well – but where we need nuance (and/or exposition), it’s as if the allotted time for these elements has run out and rhythm (time for something loud and fast) takes precedence over coherence, to say nothing of emotion. It’s a pity, because with a little more fine-tuning, this has the makings of something truly splendid.

Depp does the grave, courteous, loving husband well and Bettany is sincere in Max’s concern deepening to anguish. However, the film is primarily carried by Hall, whose fire and conviction make us believe very much in Evelyn’s dilemmas, as well as why she does what she does.

Pfister, a noted cinematographer (INCEPTION, which shares some conceptual DNA with TRANSCENDENCE, and the recent BATMAN films – Christopher Nolan is one of the exec producers here), makes his directorial debut here. His pacing is good for the most part, with at least one legitimately shocking moment, and he trusts his actors. He also gets some good traction with the effects when the computer’s reparative powers go to work.

TRANSCENDENCE is neither a success nor a failure. It has flashes of brilliance, but it has too many gaps, including a question about a key decision made in the last act. It’s worthy, but it’s not all it could have been.