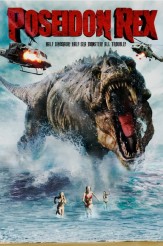 Low-budget creature features have a formula. The best ones either find ways to play with it or else embrace it to the hilt. POSEIDON REX simply abides by the formula without sprucing it up, goofing on it or doing anything to stand out from the pack. This would be okay if it were at least livelier, but whenever the title beast is off-screen, things slow to a crawl.

POSEIDON REX, for those who don’t guess it on the first try, is the name given to an enormous Tyrannosaurus Rex-like amphibian. The creature is dislodged from a deep sea bottom crevasse by a group of treasure hunters off Belize. After smashing up a few boats and swallowing some people, the P-Rex trots onto land to chase after the main characters.

Meanwhile, treasure hunter Jackson Slate (Brian Krause, one of the film’s producers) gets knocked unconscious when the P-Rex emerges from her hole. Jax, as he likes to be called, is found floating in the ocean by a group that includes marine biologist Sarah (Anne McDaniels), bereft tourist Rod (Steven Helmkamp) and helpful boat guide Henry (Berne Velasquez). Jax is also being pursued by the henchmen of island crime lord Tariq (Gildon Roland), who wants the gold Jax was diving to retrieve and isn’t about to accept an excuse involving an enormous monster.

Krause, whose genre credentials include multiple seasons of CHARMED and the feature STEPHEN KING’S SLEEPWALKERS, has a kind of weathered, crinkly charm. There are a few other decent performers here, but a surprising amount of the acting is noticeably bad even by the undemanding standards of this sort of film. The P-Rex looks good underwater and is okay on land. When she’s in the water and breaking the surface, the effect simply doesn’t work – the creature does not appear to be in the same environment as the rest of the elements of the shot.

While no one expects intricate plotting here, a marine biologist who discovers a new life form and promptly flings it alive into a freezer (instead of preparing a cage or a tank) strains the bounds of credibility more than the seagoing dinosaur. Island crime lords, on the other hand, are perfectly plausible in theory, but the problems between Jax and Tariq manage to be fuzzily defined and yet strangely dragged out. If there wasn’t enough money in the budget to show the P-Rex more frequently, fair enough, but it would have helped if the rest of the movie wasn’t so visibly marking time until the creature’s next appearance.

POSEIDON REX does get credit for showing sea life in the reef near the dive site, as opposed to many underwater movies that are so under-populated by actual marine animals that they might as well have been shot in tanks. Here we see a variety of fish, sharks and a great sea turtle. This doesn’t exactly make up for the film’s other problems, but it’s a definite asset.

Otherwise, for those who have always wanted to see something very much like a T-Rex swimming underwater, POSEIDON REX fulfills the requirements. For those looking for something scary or funny or campy or some combination thereof, the recommendation here is to keep searching.